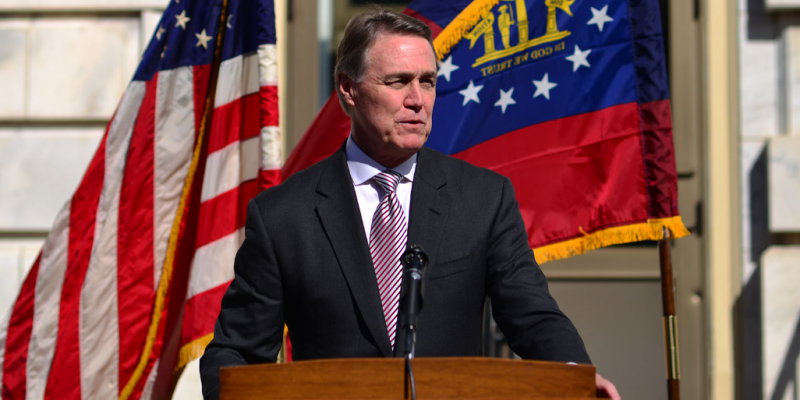 Perdue was elected to the U.S. Senate in 2014. Prior to entering politics, Perdue was a businessman who was previously a CEO at Reebok, Dollar General and Pillowtex.

Ossoff, an investigative journalist and media executive, ran for Congress in 2017 in the special election for Georgia’s 6th Congressional District.

Hazel is U.S. Marine veteran and hosts a podcast. He ran for Congress in 2018 as the Republican candidate in the race for Georgia’s 7th Congressional District.

The Center Square sent all three candidates an election questionnaire asking them to respond to questions about their policy positions.

Perdue was the only candidate to respond to these questions posed by The Center Square.

From The Center Square:

What is your view of the Tax Cuts and Jobs Act of 2017 and what position would you take on it if elected?

Perdue: Says President Donald Trump’s agenda created the greatest economic turnaround in U.S. history before COVID-19 and changing the tax code in 2017 made the U.S. competitive with the rest of the world, allowing Georgia businesses to invest more in their employees and raise wages. Perdue says before the pandemic hit, “our economic agenda led to the highest middle-class income in U.S. history, the lowest unemployment in 50 years, and the lowest African American, Asian, and Hispanic unemployment ever measured.” He says Trump needs to be reelected and Republicans need to keep the majority in the Senate so Democrats do not undo the reforms.

Ossoff: Did not respond to the questionnaire. Last year, Ossoff told The Atlanta Journal-Constitution, “We have squandered trillions on tax cuts for wealthy donors.” He also tweeted last year, “We borrow trillions to cut taxes for the wealthy & powerful.”

What other tax policies do you support? Would you vote to raise taxes? Explain.

Perdue: Says high taxes and burdensome regulations create big obstacles for small businesses, which are facing even greater challenges in the wake of COVID-19. Perdue applauds the bipartisan Paycheck Protection Program, which, he says, saved 50 million jobs nationally and 1.5 million jobs in Georgia.

Ossoff: Did not respond to the questionnaire. According to his campaign website, Ossoff supports policies that “lowers taxes for all but the wealthiest Americans” and he will work to make tax compliance “simpler and more efficient for our businesses.”

The federal budget deficit and national debt have grown at record paces during the COVID-19 pandemic. How concerned are you about both, and what policies would you support to reduce debt and the recurring budget deficits?

Perdue: Says the national debt crisis and global security crisis are why he ran for the U.S. Senate in 2014. Perdue says once the country gets past the pandemic, “we have to address the real drivers of our debt. If we don’t save Social Security and Medicare, our debt is projected to be over $35 trillion in 10 years. Rebuilding the economy is the first step to preventing that.”

Ossoff: Did not respond to the questionnaire. In May, Ossoff told The Atlanta Journal-Constitution, “Our country’s borrowing capacity is not unlimited, and the federal government has to set priorities with limited resources.”

Hazel: Did not respond to the questionnaire. According to his campaign website, Hazel supports eliminating the Federal Reserve. “Both democrats & republicans have enslaved every American for generations to come thru debt owed to a faceless, unaccountable international banking cabal known as The Federal Reserve. It is time to restore freedom in money, it’s time for Free Markets,” the website states.

What national health care policies do you support and, if they increase costs, how would you pay for them?

Perdue: Says market-based solutions are key to driving down the costs of health care, which means increasing choice for consumers and abandoning the Affordable Care Act, claiming it has led to higher premiums, hospital closures and fewer options for care. Perdue wants to address the issue “through innovative policies that empower consumers with competitive costs from their providers.” Perdue has introduced legislation, he says, that would guarantee coverage of preexisting conditions with no additional cost. He also says there needs to be a crackdown on surprise medical billing, and he wants to lower prescription drug costs.

Ossoff: Did not respond to the questionnaire. According to his campaign website, Ossoff supports a public health insurance option as an alternative to private insurance and wants to strengthen the Affordable Care Act’s protection of preexisting conditions for those choosing to keep their private insurance.

What national energy policies do you support?

Perdue: Says low-cost energy is essential to keeping the U.S. competitive with the rest of the world and rolling back Obama-Biden regulations gave power back to the states to decide what’s best for their industries. Perdue says “we should also continue maintaining our environment through responsible energy policies that encourage investment in power sources like nuclear energy.” He supports construction of Plant Vogtle nuclear reactor units three and four in Waynesboro. “This project will help bring our nuclear capabilities into the 21st century and make Georgia a leader in our country’s long-term energy independence,” Perdue says.

Ossoff: Did not respond to the questionnaire. According to his campaign website, Ossoff supports “rapidly transitioning to clean energy sources, dramatically reducing carbon emissions and increasing energy efficiency” and would reverse the Trump administration’s rollbacks of clean air, clean water and fuel economy standards.

What would be your role as a U.S. Senator in upholding the U.S. Constitution and preserving democracy?

Perdue: Says, “We need to preserve the principles that make America the greatest country in the world: economic opportunity for everybody, limited government, and individual liberty.” Perdue says he is committed to protecting the constitution and preserving America’s founding principles.

Ossoff: Did not respond to the questionnaire.