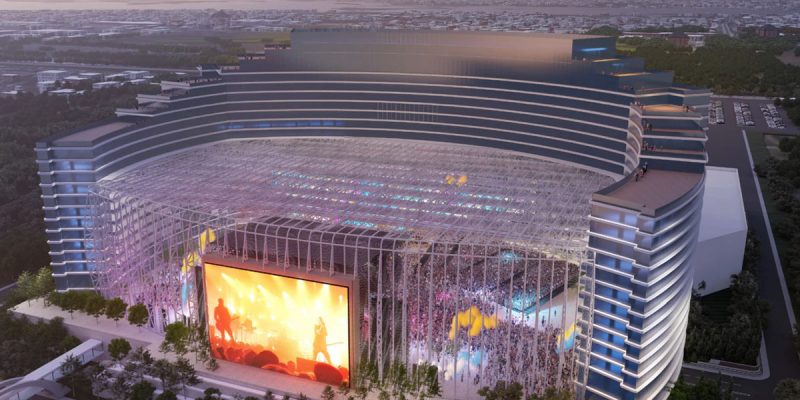 Did you see this gigantic economic development announcement coming out of Mississippi?

Universal Music Group has quite a portfolio. Iconic companies like Abbey Road Studios, Capitol Records and Def Jam Recordings fall under its umbrella.

Now, a news release says it will combine its connection to music and some of the world’s greatest entertainers with the rich musical heritage of Biloxi to develop a UMUSIC Hotel. Investors say the UMUSIC Broadwater Hotel in Biloxi will seamlessly integrate a stunning performance venue and a luxury hotel with an immersive architecture style.

In that news release, Biloxi Mayor Andrew “Fofo” Gilich said, “Music and entertainment has always been a part of Biloxi DNA.  What the UMUSIC Broadwater Hotel brings with its opening is reflective of this 320 plus year history.  The people of the city of Biloxi, the state of Mississippi and beyond will benefit greatly from the addition of this hotel to our landscape.”

It’s pretty interesting that the music business even still has the kind of capital to embark on projects like these. One imagines this is a “go big or go home” type of thing seeing as though the record industry has run through such tough times of late. Marrying the music business with the hospitality industry does make some sense – you can perhaps capture more consumer dollars by selling folks a hotel room along with a concert ticket, not to mention meals and lots of other things.

The other issue which seems to be a bit of a head-scratcher is the hurricane angle. That’s a giant glass building facing the Gulf of Mexico, and the number one reason Biloxi and the Gulf Coast has had so much trouble taking off as an economic hotspot is that every 30 years or so it gets wiped out by a Camille or a Katrina.

And yet Universal Music Group picked the Gulf Coast, Atlanta and Orlando as the first three places to put these combination hotels/concert venues.

Wonder why that is?

Is it because New Orleans is run by a clueless Communist who has run off as much of the hospitality trade as she possibly could? Is it because the city government is hopelessly corrupt and totally incompetent?

Nobody is spending $1.2 billion on commercial ventures in New Orleans right now. They’re building condos for rich people from Boston and San Francisco to use a few weeks out of the year and then put on VRBO. But then the city government attacks VRBO and Airbnb and destroys even that.

New Orleans has lost some 99,000 jobs in the past year, though it’s recovered some of them in the last couple of months. They just secured $1.2 billion in capital investment in hospitality next door in Mississippi.

This ought to be the final straw which insures that LaToya Cantrell cannot be re-elected as New Orleans’ mayor. But are there enough people interested in a viable private-sector economy in New Orleans to make even that obvious remedy possible?

Oh – and let’s not let the State of Louisiana off the hook for this. That hotel could have been built in Jefferson Parish or in St. Tammany Parish, you know. But investments like these don’t happen anywhere in Louisiana anymore. This state’s economy was down the tubes before COVID-19 even came along; Louisiana’s 1st quarter GDP figure was minus-6 percent, an indication we were a black hole even before the COVID shutdowns. Texas’ same figure was minus-2.5 percent.

Mississippi has reopened. So have Tennessee and Florida. Texas, which has been slow, is making moves as well now. They’re doing business, and they are kicking our ass. And Louisiana’s legislature, or at least its leadership and the people willing to follow that leadership, is doing everything it can not to compete with our neighbors and reopen the state, while our governor is fighting anything that would grow the economy.

So the question becomes what are we still doing here? Is it getting time to turn out the lights and leave the place to the nutria, the alligators and the crazed leftists we stupidly put in charge?