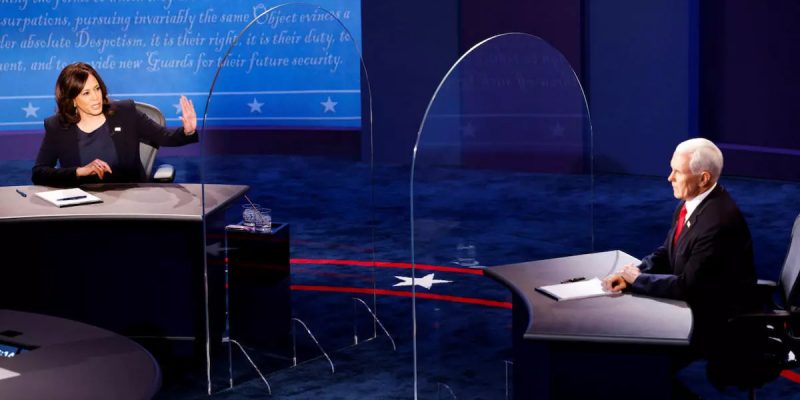 Before we get into the lies, which were painfully easy to spot, an observation: I notice from watching social media while the Vice Presidential debate was going on last night that while nobody really seems to like Kamala Harris, the people who seem to have the most visceral dislike for her are women.

At the risk of an overgeneralization, women pick up on different things than men. Women have a higher emotional IQ than men, so that’s not surprising. They read body language better and pay it more attention.

Kamala Harris’ body language isn’t good. While Mike Pence often looks a little like an animated statue; his movements are very placid and he’s extremely still – it wouldn’t be unfair to say that Pence exhibits very little body language at all – Harris, on the other hand, is a waterfall of body language, almost all of it off-putting.

She flashes this very hostile smirk incessantly. She does the “I won’t be lectured to” Basic Bitch pose which comes off as entirely disrespectful and ugly. She has this wild expression in her eyes which comes off almost as a tell that she’s lying. She’s insincere, and she’s insecure, like she knows she conned her way to where she is. She’s looking for something to be offended by and seems to pounce on such opportunities.

As a guy, I’m just focused on the substance you’ll see below. But female friends I talked to all said they couldn’t even get to the substance because they were so turned off by her attitude and demeanor. Two judgements popped out among most: first, that they could absolutely tell she had slept her way up, which seems like a mean thing to say but it makes sense as it fits with the insincerity and insecurity and hair-trigger offense she shows; and second, that they see her as that woman in the office or the social circle who abuses what power she has in the relationships therein.

One said “Harris is that female boss who doesn’t belong there and acts like she’s a queen, and all the employees hate her and want new jobs.”

It’s not surprising that in the Democrat primaries, where the female vote is what governs, Kamala Harris was a lead balloon. Even before you get to ideological issues or matters of substance she was already doomed just based on her presentation.

But on the substance, it’s worse. These actually came from the Trump campaign, but they meshed pretty well with the list I’d written down so I just figured I’d crib from their work…

HARRIS: “The president said [coronavirus] was a hoax.”

FACT: Harris repeated a frequent lie from the Biden campaign that has been debunked by at least 8 fact checkers; President Trump never called the coronavirus a hoax.

FACT: President Trump and his Administration have taken swift action on the coronavirus from the beginning, leading a whole of government response to the pandemic.

HARRIS: “We now know because of great investigative journalism that Donald Trump paid $750 in taxes.”

FACT: Harris is wrong; President Trump paid millions of dollars in taxes in 2016 and 2017.

HARRIS: “And through a plan that is about investing in infrastructure, something that Donald Trump said he would do. I remember hearing about some infrastructure week, I don’t think it ever happened.”

HARRIS: “On the other hand, you have Donald Trump, who measures the strength of the economy based on how rich people are doing. Which is why he passed a tax bill benefiting the top 1 percent and the biggest corporations of America…”

FACT: This claim is false and has repeatedly been debunked by fact-checkers and even The New York Times.

HARRIS: “And the truth and the fact is, Joe Biden has been very clear, he will not raise taxes on anybody who makes less than $400,000 a year.”

FACT: Biden’s $4 trillion tax hike will raise taxes on 82 percent of Americans, including those making less than $400,000.

FACT: Biden repeatedly expressed support for wiping out fracking, the fossil fuel industry, and the jobs they support.

HARRIS: “Joe Biden is the one who, during the Great Recession, was responsible for the Recovery Act that brought America back. And now, the Trump-Pence Administration wants to take credit when they rode the coattails of Joe Biden’s success for the economy that they had at the beginning of their term.”

HARRIS: “And of course now the economy is a complete disaster.”

HARRIS: “You have Donald Trump who is in court right now trying to get rid of the Affordable Care Act, which means that you will lose protections if you have pre-existing conditions.”

HARRIS: “The Vice President earlier referred to what he thinks is an accomplishment that the president’s trade war with China. He lost that trade war. You lost it.”

FACT: President Trump is standing up to China’s unfair trade practices and has achieved results for American workers and businesses, while Biden’s trade policies with China cost millions of jobs.

HARRIS: “We are in a manufacturing recession because of it.”

FACT: Before the pandemic hit, American manufacturing was growing and adding jobs thanks to the President’s pro-growth policies.

HARRIS: “[The Obama-Biden Administration] created within the White House an office that basically was responsible for monitoring pandemics. [The Trump-Pence Administration] got rid of it.”

FACT: This is false; President Trump did not get rid of the National Security Council’s pandemic response team

HARRIS: “[Trump] has referred to our men who are serving in our military as suckers and losers.”

FACT: At least 14 officials who were on the trip to France with President Trump have gone on the record to refute the anonymous sources and allegations in The Atlantic article.

HARRIS: “Look at the Iran nuclear deal which now has put us in a position where we are less safe because they are building up what might end up being a significant nuclear arsenal.”

FACT: Harris’ claim is false; the Obama-Biden Administration’s deal left Iran with a path to a nuclear weapon.

HARRIS: “Donald Trump is in court right now trying to get rid of the affordable care act. And I said it before and it bears repeating, this means that there will be no more protection, if they win, for people with pre-existing conditions. This means that over 20 million people will lose your coverage.”

FACT: Harris’ claim has been called “misleading,” and President Trump has said he will always protect Americans with pre-existing conditions, even if Obamacare is struck down.

HARRIS: “And Donald Trump when asked about it said there were ‘fine people’ on both sides.”

FACT: This is an often-repeated lie that Joe Biden has made; President Trump specifically condemned neo-Nazis and white supremacists in Charlottesville.

Plus, there’s a video. Everything Trump said in this video about Charlottesville was spot on and it is an absolute disgrace that the media and the Democrat Party continues to push this “white supremacist” lie…

HARRIS: “I was the first statewide officer to institute a requirement that my agents would wear body cameras and keep them on full-time”

HARRIS: “Public reporting that Russia had bounties on the heads of American soldiers. And you know what a bounty is? It’s somebody puts a price on your head, and they pay it if you’re killed.”

FACT: Top military and intelligence officials have strongly emphasized that the reporting of bounties is unproven.

HARRIS: “In 1864 … Abraham Lincoln was up for re-election, and it was 27 days before the election. And a seat became open on the United States Supreme Court. Abraham Lincoln’s party was in charge not only of the White House but of the Senate. But Honest Abe said that it’s not the right thing to do.”

FACT: Lincoln didn’t nominate a Supreme Court Justice because the Senate was out of session and he was concerned about the political consequences of a nomination. It wasn’t because Lincoln thought the vacancy should wait.

HARRIS: “You know this administration took the word ‘science’ off the website?”

FACT: The word “science” was not scrubbed from U.S. government websites by the Trump Administration.

FACT: Harris avoided answering whether a Biden-Harris administration would pack the Supreme Court, something that she previously said she was open to.

HARRIS: “Last week, the President of the United States took to a debate stage in front of 70 million Americans and refused to condemn white supremacists.”

FACT: This completely false and assertions that President Trump has refused to condemn white supremacists has previously been debunked.

FACT: In 2016, Biden tried to push through the nomination of Merrick Garland despite it being an election year.