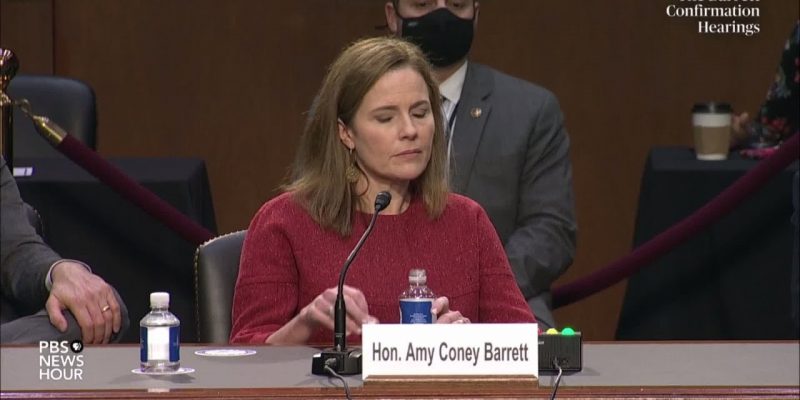 This was from last night’s session of Barrett’s confirmation hearings, as you can tell from Kennedy asking her if she’s tired in the beginning and by Barrett’s admission she’s just about had enough and .

It’s a little on the awkward side at times as Kennedy keeps telling her to affirm that she’s not a liar, which he kind of overdoes it with, but the point is well made that the Democrats’ dumb attacks on Barrett about whether her previously-expressed political views are disqualifying. After all, to the consternation and quite reasonable suspicion of conservatives surrounding some of his decisions, John Roberts has quite surely shown that someone who has personal political views can put those aside to decide cases. If you think Roberts was a fan of Obamacare you’re insane, and yet he still saved it when it came in front of the Supreme Court.

The most fun part of the dialogue is when Kennedy covers the insane allegations made by Boston University professor and hard-core black racist Ibram X. Kendi who called Barrett a “white colonizer” for having adopted two kids from Haiti. Kennedy calls Kendi “some butthead professor” when he brings it up and sets her up to knock that question out of the park.

Incidentally, I handled Kendi’s idiocy in an American Spectator column a couple of weeks ago…

What prompted Kendi’s paranoid and quite racist screed is the fact that Barrett and her husband have, among their seven children, an adopted daughter and son from Haiti.

Among the various things that white people may not do, according to the High Priests of Critical Race Theory like Ibram X. Kendi, is to adopt black children. And Kendi is not alone among leftists willing to push this hot button. For example, there was the troglodyte Democrat activist Dana Houle, who tweeted:

I would love to know which adoption agency Amy Coney Barrett & her husband used to adopt the two children they brought here from Haiti.

So here’s a Q: does the press even investigate details of Barrett’s adoptions from Haiti? Some adoptions from Haiti were legit. Many were sketchy as hell. And if press learned they were unethical & maybe illegal adoptions, would they report it? Or not because it involves her children.

Would it matter if her kids were scooped up by ultra-religious Americans, or Americans weren’t scrupulous intermediaries and the kids were taken when there was a family in Haiti? I dunno, I think it does, but maybe it doesn’t or shouldn’t.

And then there was John Lee Brougher, the former chief technology officer for Texas Democrat state senator and failed gubernatorial candidate Wendy Davis (he also operates Tom Steyer’s PAC), who popped this out:

As an adoptee, I need to know more about the circumstances of how Amy Coney Barrett came to adopt her children, and the treatment of them since. Transracial adoption is fraught with trauma and potential for harm, and everything I see here is deeply concerning.

Both Twitter accounts have been made private since after bringing down a mountain of objection and opprobrium with those obnoxious tweets. Nevertheless, it’s clear the Left is determined to turn “controversial” an unalloyed good deed that Amy and Jesse Barrett have done in raising a pair of kids from desperate circumstances in one of the poorest countries in the world as their own.

The legal discussion is interesting as well. It’s a real tour de force by Barrett when Kennedy takes her through originalism and textualism as questions of judicial philosophy. It’s a little wonky, but it’s informative, and she’s a fountain of knowledge.

Barrett has blown these hearings away, and the Democrats have done themselves a huge amount of damage with the dumb attacks they’ve made on her. Compare Kennedy’s questioning last night with Amy Klobuchar earlier today…