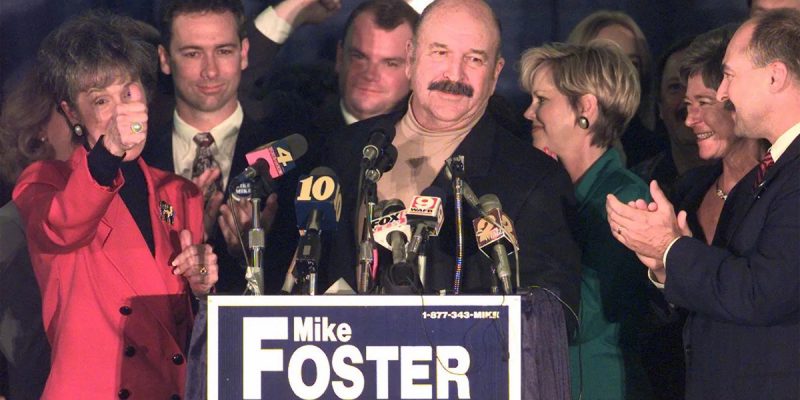 This week, Louisiana mourns the loss of one of our state’s greatest leaders. Governor Mike Foster was a true original who brought his own unique style and brand of governing to Louisiana’s highest office. While he left politics more than 16 years ago, it’s not very hard to find present reminders of his legacy in every part of our state. It’s safe to say that because of his work, Louisiana today is a much better place to get an education, find a job, start a business and raise a family.

If you read through the pages of our history, you’ll find that the Louisiana governorship has often been a job dominated more by the concerns of personality and politics rather than policy and progress. But Mike Foster was different. He broke from the traditional mold and often ignored politics and was indifferent to personality, instead charging to confront the state’s most pressing problems. When he moved out of the Governor’s Mansion in 2004, he left behind a list of landmark achievements that still resonates nearly two decades later.

It’s worth remembering that his initial election as governor came only four years after the infamous runoff between Edwin Edwards and David Duke brought national shame and scorn to Louisiana. Citizens were embarrassed after decades of political scandals in Baton Rouge and viewed state government as nothing more than a bureaucratic behemoth that just wasted more tax dollars with each passing year.

After decades of fast dealing and slick talk coming out of the State Capitol, Louisiana voters found the refreshing opposite with Mike Foster. He didn’t speak in soundbites or use polls to determine his positions. If you really wanted to know what he was thinking or where he stood on an issue, all you had to do was ask. What you saw was what you got.

Over the years, any time I spoke with him and referred to him as “Governor,” he was always quick to correct me and ask that I just call him Mike. I know countless others would say the same. Mike was always most comfortable at eye level with whomever he was with because he never saw it any other way.

While his style was unconventional for politics, citizens appreciated his straightforward, businesslike manner. He thought, spoke and acted like most Louisianans. He grew his beard out for duck season, loved to hunt and was most comfortable in camouflage, even in the office. He did away with a lot of the ceremony and pomp that traditionally came with the job, choosing instead to focus his attention and efforts elsewhere. And while he did find the time while in office to go to law school at Southern University, get a helicopter pilot’s license and do a lot of riding on his motorcycle, he was still able to produce incredible results for the state.

In his inaugural address, his first speech to Louisianans as their governor, Mike Foster pledged that his administration would “reinvent this government.” That simple charge would define the next eight years and leave Louisiana a much different place than it was when he took office.

Governor Foster made unprecedented investments in K-12 education, working tirelessly to raise teacher pay and ensure that more funds made their way to students. He championed education reform, school accountability, and helped create Louisiana’s first charter schools. The TOPS program that he passed ensured that thousands of our state’s most talented students stayed home to attend our colleges and universities. Unsatisfied with the structure of higher education he found, Governor Foster created the Louisiana Community and Technical College System to develop our workforce.

He also tackled the challenge of a dysfunctional workers’ compensation system and put it on solid financial footing by spearheading the creation of the Louisiana Workers’ Compensation Corporation. He stood up to the politically powerful trial lawyers of the time and passed significant legal reforms that brought Louisiana’s civil justice system more in line with the rest of the country and lowered auto insurance rates for our drivers.

Before he got into politics, Mike Foster owned a construction company. As Governor, he turned that professional passion into projects such as the state buildings that now dominate the Baton Rouge skyline and revitalized the Capital City’s downtown. After years of frustrating delays, I-49 was completed between Lafayette and Shreveport on his watch.

He also cared little about politics when it came to personnel. In stark contrast to the divided political world of today, he hired people based on their substance, character and ability to help the state. He gave them the charge, backed them up and got out of their way.

After his time in office was up, he didn’t hang around the Capitol or play political kingmaker. He simply stepped aside and moseyed on back to his quiet life down in Franklin.

Louisiana is incredibly lucky to have received the service of Mike Foster. At the time we needed not only his results, but also his humble and straight forward honesty about the challenges Louisiana faced and the tremendous opportunities we had before us. His sensible and courageous leadership transformed the state and made us a better place. We need more public servants like him today.

If you want to remember Governor Foster, try to emulate the man known simply as “Mike” more in what you do. Stand for what you believe. Surround yourself with smart, good people and let them shine. Be honest and straightforward with people. Serve your state when it needs you and gracefully step aside when it is time to move on. Take risks for the right reasons and avoid making deals for the wrong reasons.