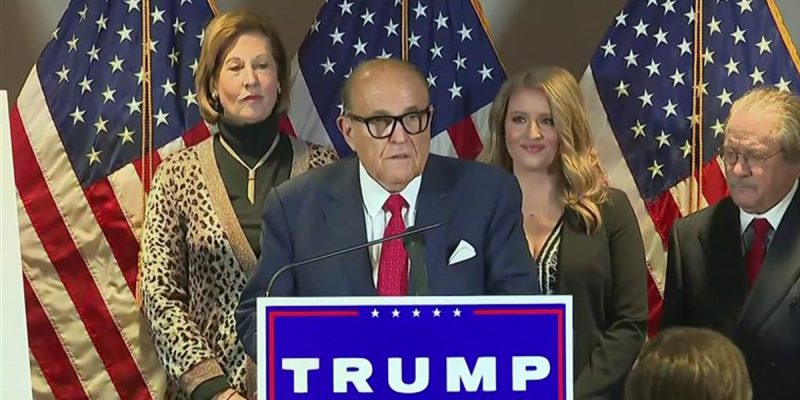 I confess that I do not know what to believe. I watched the Giuliani press conference and he and the others with him made solid sounding arguments as to the illegitimacy of the Presidential election. Are they valid arguments? More important are they provable arguments? Who knows, but I will say this, no matter what the evidence certainly deserves unbiased scrutiny from the media and the DOJ.

Perhaps despite the Giuliani expose’, I do see a pattern emerging. Trump is playing a two ended game in which he wins with either outcome.

The first twist is that somehow Giuliani, et al can develop enough proof to convince judges, probably Supreme Court Justices, that there has been significant interference with the election process. That interference would have to be proven to be of sufficient impact that by judicial edict the court would award President Trump the victory in the election, or else perhaps convince the legislatures in states like Georgia, Michigan and Pennsylvania to award electors to Trump rather than Biden based on the evidence of skullduggery. To me this is a long shot, but clearly the Trump camp, as they have every right to, is playing out its options. In this case Trump wins.

The other, and to me more likely outcome, is that the Trump lawyers will run out of time and never be able to produce the kind of evidence that the courts would find so substantial that they would overturn what now appears to be an insurmountable lead for Biden. In effect the courts, based on the evidence presented, would find it impossible to invalidate so many votes. And those state legislators won’t overturn certified election results to slate Trump electors.

Even in this scenario, Trump wins again. In this scenario somewhere perhaps north of half the people of our nation would be convinced that the election was stolen. And then Trump, to this vast number of people, would have become a martyr to injustice. Biden would win the Presidency, but after that everything he would do would be tainted as being illegitimate.

In four years Trump could make another run for the Presidency against a very old Biden, or he could just retire from active political life with an Emeritus status in the eyes of all those people who believe that he was cheated. He could then find himself in a position to say “I told you so,” as criticism of Biden for whatever he does. And when, as so many believe will happen, Biden stumbles, Trump will be able to use his celebrity to be the most sought-after anti-Biden leader.

Perhaps the reason that Democrats today are crying out for reconciliation and harmony is that they recognize that no matter what happens Biden is damaged goods. His Presidency is doomed to be torn asunder by internal party warfare between what remains of moderate Democrats and the members of the very loud extreme Left. He will have half of American suspicious of him. His every move will be framed, not by what he says, but by how he won. And should the GOP remain in control of the Senate his agenda will be stillborn.

Because of a growing schism in American politics, a schism that has already become overheated and will become more so as Biden is unable to control his Left flank, should Trump decide to return in four years he would find a strongly unified base. At its core would be those 50% of citizens who believe that his re-election was stolen. To that group would be added many of those who, though recently anti-Trump, after what the next four years will likely be like would be hard pressed to support a renewed Biden candidacy. And of course, all of this would be even more favorable for Trump if the controversy surrounding Hunter Biden re-ignites and a President Biden is disgraced or even hounded from office because of corruption.

If Trump decides not to run, he maintains hegemony with a massive block of voters. The sympathy factor for him alone lends great credibility to his leadership and, better yet, If Biden does stumble Trump appears clairvoyant. In this scenario Trump becomes the King Maker and will control conservative thought and candidates for a long time to come. Trump wouldn’t necessarily be the 47th president, but he would certainly decide who is.

So, either way, at the expense of Biden, Trump wins. Perhaps the only way his winning outcomes could be weakened is if he concedes the current election. Therefore, my prediction is that Trump will be Trump. He will not ever concede. Though he may be forced by fate to leave his office, he would do so while always claiming that he and the American people were cheated out of the legitimacy of their vote.

No matter what, and whether you like him or not, we have not even come close to seeing the end of Donald Trump.