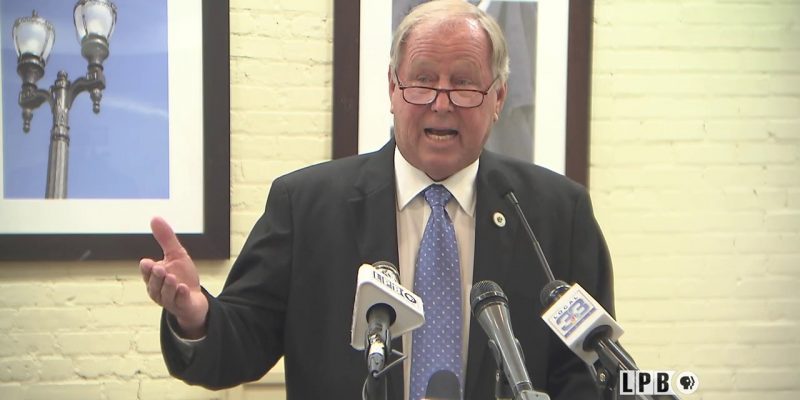 We don’t do a whole lot of endorsements here at The Hayride, though we’ve certainly departed from that in the past week or so by endorsing Luke Letlow for the 5th District congressional seat and reiterating our endorsement of Eric Skrmetta for another term on the Public Service Commission. Both are on the ballot on Dec. 5.

Those are important races and Letlow and Skrmetta are the right men for the job. It’s important both win.

But for the long-term future of Louisiana, one could argue the most important line on a ballot in Louisiana is in East Baton Rouge Parish, where Republican former state representative Steve Carter faces incumbent Democrat Sharon Weston Broome for mayor-president.

Carter seems like an underdog in the race. Broome managed 48 percent of the vote in the Nov. 3 primary, with fellow Democrat Denise Marcelle finishing fifth with seven percent. That meant 55 percent of the voters in the primary went with black Democrats and only 45 percent choosing candidates who don’t fit that description.

Not to mention it was 2000 the last time East Baton Rouge Parish elected a Republican for its top local office. In the four election cycles that followed, the closest a Republican came to winning was four years ago, when Bodi White managed 48 percent against Broome.

But that can’t happen if Louisiana’s capital city is going to survive as anything other than a cesspool of poverty, crime, corruption and decline.

There’s an old saw about how the way you boil a frog is to stick him in the pot and turn the temperature up on him very slowly. He won’t notice what you’re doing until it’s too late. Turn up the heat too quickly, though, and he’ll jump out.

The heat was building very slowly for the 12 years Kip Holden was mayor of Baton Rouge. Holden even managed a few accomplishments in his time, though Baton Rouge’s decline relative to other similarly-sized cities in the South had already begun. But in the four years Sharon Weston Broome has been in charge, the burners are set on their highest setting and we are boiling.

This is our last chance to jump out. Beyond this point the only escape for the people of Baton Rouge from incompetence, corruption and downright insanity is going to come courtesy of a U-Haul truck and a “motivated” sale of one’s house.

It’s already happening. Go to the U-Haul web site and compare rates to rent trucks in Baton Rouge for dropoff in major cities in the southern region and you can see a frightening pattern developing.

Pick any city of size around the South, and you’re going to find much the same story. It’s a whole lot cheaper bringing a U-Haul truck to Baton Rouge than it is taking one out. And that’s a very good metric for outmigration. If people were coming to Baton Rouge on net rather than leaving, the rates would reflect that.

They don’t. People are getting the hell out. Since, 2016 the City of Baton Rouge has lost 7,459 residents or about 3% of the total population. The rest of the parish has grown, but compared to those other cities EBR has been stagnant if not declining.

Remember when we used to talk about Baton Rouge as America’s Next Great City? People don’t pick up and leave “great” cities which are ascending.

And why wouldn’t they leave? Yesterday this graphic appeared in a post here on the site…

They’re freaking out in Los Angeles because they’ve just had their 300th murder, making this the most dangerous year there in memory. But in Baton Rouge, with less than a tenth of the population of Los Angeles, there have been more than 120 murders this year.

Considering that the murder rate had been on a slightly downward trend in East Baton Rouge Parish before Broome took office, the fact that her four years have been four of the five deadliest in the city’s history is a stark indictment of just how dreadfully poor her performance in the area of public safety has been.

Baton Rouge has ranked 5th, 7th, and 6th in murder/non-negligent manslaughter rate of any city in the U.S. with a population greater than 100,000 from 2017-2019. That’s going to be considerably worse when the 2020 numbers come in. Who knows? Maybe we’ll top those charts this year. Too many more days like Friday, when no less than five of our neighbors were killed in four different shootings, and we’ll get to say “We’re #1!” when it comes to slaughtering each other.

We’ve seen an explosion of aggressive panhandlers in Baton Rouge. We’ve seen morons in the streets protesting perceived slights rather than real suffering. We’ve seen empty storefronts and economic retraction even before COVID-19 came along to stick a knife in our hospitality and retail sectors. We’ve seen layoffs and plant closures, not to mention planned investments vanishing.

That’s reflected in the numbers. From 2016-2019 Baton Rouge lost 7,692 jobs while the workforce actually shrunk by 11,121. By September 2020 the Baton Rouge unemployment rate was 7.5 with 214,773 jobs and 17,418 individuals unemployed. It’s actually worse now than it was in September, which is a function of the state’s economy as a whole cratering this month. And leftist groups who all but own Sharon Weston Broome are on a crusade to stamp out anything that looks like a pro-business agenda.

This movie is a remake, by the way. If you want to know Baton Rouge’s future, take a trip east on I-12 and then hang a left on I-55 and head north. In a couple of hours or so you’ll be in Jackson, Mississippi which is a ruin.

I hate to be the Ghost of Christmas Future here, but that video, as depressing as it is, could already be made in Baton Rouge.

There are neighborhoods in Jackson which were clearly once exclusive and desirable. Nobody lives in them now. The exodus from that city was so fast and so pronounced that the houses in them couldn’t be sold. Anybody who wants to buy a house in Jackson can get one for the price of a middle-class monthly paycheck.

But go just north across the county line into Ridgeland, or west into Clinton, and very shortly that changes.

That’s true here as well, by the way. Livingston and Ascension Parishes are booming. There is even some talk about West Baton Rouge Parish becoming the next beneficiary of East Baton Rouge’s collapse. Go north of Florida Boulevard and it looks pretty similar to Jackson already.

Is Steve Carter the savior of East Baton Rouge Parish? Well, one thing we can say for Steve is he’ll at least stop digging.

Carter isn’t a hard-core conservative. He’s a moderate Republican, which is the only kind of Republican who can win in Baton Rouge. Carter is a reformer, though. He was the chair of the House Education Committee in 2012 when an aggressive reform package promoting school choice was instituted. There have been positive effects of that package’s passage statewide, though Baton Rouge was largely spared them thanks to an entrenched bureaucracy at the East Baton Rouge School District which is more interested in vilifying dead white guys than stopping school violence or teaching kids math.

Carter has also been persistent in trying to do something about Baton Rouge’s lousy road infrastructure. We haven’t liked all of those efforts on his part. They’ve involved gas taxes, and we’re opposed to those without offsetting them through tax cuts elsewhere. But he’s been open to new and different ideas, including setting up local or regional taxing districts to bypass the state bureaucracy and deliver revenue directly to road construction. That shows interest in getting things done, something Sharon Weston Broome is thoroughly clueless about.

This might be the last real election East Baton Rouge has. The demographic shift which is going on right now is going to continue removing middle class people from East Baton Rouge until this is a failed city like Baltimore, Jackson or Detroit in which there are a few rich people and a whole lot of poor people dependent on the government. At that point your elections are going to be choices between socialist Democrats whose professional accomplishments reflect complete mediocrity and whose records in office are litanies of stupid, venal decisions and utterly flagrant corruption.

It will be too unsafe on the streets to do legitimate business, and so no legitimate business will be done. And job creators and professionals, those who missed their opportunity to get out without taking massive losses in selling their property, will remain as members of an oppressed minority, forced to give campaign contributions essentially as protection money to machine politicians on pain of harassment by government functionaries of every stripe imaginable.

Four years of Steve Carter would be four years with the burners turned down and the water around our collective frog able to cool. It would be an opportunity for the city-parish government to recover some sense of intelligent decision-making and responsible administration. For Baton Rouge to actually pursue economic development. For the stupidity of Broome’s jihad against the St. George people to end and a real negotiation about the future of the southern part of the parish to commence. For a rejuvenation of law enforcement in Baton Rouge to recover some safety on the streets. For a bold plan to build a bridge south of downtown so the 18-wheelers which now clog up I-10 through downtown can be relocated somewhere more sensible.

None of these things can happen with Sharon Weston Broome in office. She’s proven that. Save for LaToya Cantrell there is no mayor in Louisiana more deserving of a firing than Broome.

In Monroe earlier this year, a populace even more Democratic and African-American than Baton Rouge is decided they’d had enough of incompetence and decline and fired Jamie Mayo in favor of a moderate Republican named Friday Ellis, who was running as an independent. It was one of the most hopeful signs in Louisiana politics this year.

Baton Rouge desperately, desperately needs a similar miracle. Baton Rouge needs Steve Carter to be elected next month. It’s either that or a fast trip to rock bottom.

Interested in more national news? We've got you covered! See More National News
Previous Article SADOW: Mike Johnson’s Moving Up In The House, And So Is Louisiana
Next Article Make Sure You Vote No On That Constitutional Amendment On The Dec. 5 Ballot