Last weekend was a real milestone in Baton Rouge’s history, and not a particularly good one.

Over the weekend there was a rash of violence around the city, most centered in the poor areas in the northern part of town, and specifically surrounding an incident which in another time would have taken on a legendary, horrific character…

A mass shooting that killed a 25-year-old and wounded several others on Plank Road this weekend erupted as hundreds of people gathered for an impromptu street party, one of several loosely organized events that have worried city officials due to the lack of security and social distancing amid the parish’s coronavirus epidemic.

The reason for the shooting was still unknown Tuesday, and Baton Rouge police say they’re also unsure if the shooters were a part of the group gathered past midnight Sunday outside the Exxon Gas Station on Plank Road and Evangeline Street.

City officials have observed a rise in weekend gatherings that’s seen flocks of young people who have crowded different parts of the city and moved their parties to another location when police respond.

Eight people were wounded in that fusillade of gunfire, the origin of which still hasn’t been identified or anyone arrested.

Which is, of course, an outrage, and you would rightly expect that people would be awfully damned mad about it and demanding that the Baton Rouge Police Department get on the case, find out who was responsible and put the bastards under the jail.

And twice this week there were in fact protests involving the BRPD.

But, wait…that wasn’t quite what the protests were about…

Protesters gathered near the Baton Rouge Police Department Wednesday evening in response to video footage released of an officer detaining two individuals following a police chase, one being a teen.

Community activist group “BR For The People” posted a call to action to social media Tuesday, inviting the public to protest the department.

The post prompted those interested in joining the “No Peace” protest to gather at Conn’s parking lot, which is adjacent to the police department, at 5:30 p.m.

“We are done negotiating with BRPD. Their incompetence to listen to and serve us is a gross disrespect and disregard for the community. Join us this Wednesday. No justice… NO PEACE,” the post reads.

In the video of the arrest that sparked initial controversy on social media, an officer’s knee is placed in a questionable position near the teen’s neck.

Two police officers involved in the arrest have been placed on administrative leave while the department investigates the placement of one officer’s knee as the teen was handcuffed.

The tactic of holding a subject down by placing a knee on their neck is banned in the department and has become a flashpoint of aggressive policing in the wake of the death of George Floyd in Minnesota earlier this year.

You mean they weren’t interested in finding out who was responsible for the incident in which more than 100 rounds were discharged into a crowd of people, turning the streets of North Baton Rouge into something more akin to Kabul or Mogadishu than…wait, never mind; Baton Rouge might actually be a more dangerous city than Kabul or Mogadishu right now.

No, they were angry about a different incident…

The teenager was a passenger in a vehicle that led police on a nearly hour-long chase.

Dashcam video of the incident starts with a wild car chase. A newly released video shows a BRPD unit racing through neighborhoods right on the tail of a red car. One of four new videos released by the Baton Rouge Police Department paint a clearer picture of what happened when an officer used a knee to pin down a 17-year-old during an arrest on July, 6.

A bystander’s video of the arrest of the teenage passenger went viral, with some claiming the video appeared to show one of the arresting officers placing his knee on the teenager’s neck.

The kid was the passenger in the car that was involved in the car chase. He wasn’t even arrested. The cops called his mom to come and pick him up. The driver will be in jail for quite a while, but the kid wasn’t even roughed up. He just got pinned down while they figured out who he was. And no, the knee wasn’t on his neck like he was George Floyd.

The good news is Wednesday’s protest was basically nothing. At most it was 50 losers, most of them white idiots waving stupid signs saying things like “white silence is white violence,” and doing their best to make a nuisance of themselves while trying not to get hit by 18-wheelers on Airline Highway.

That said, there was this… 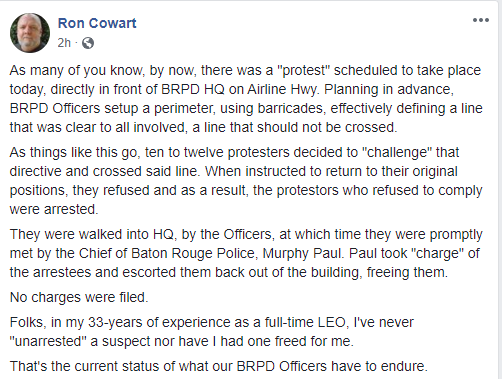 Needless to say it is impossible to perform effective law enforcement inside the city limits of Baton Rouge. Mayor-president Sharon Weston Broome and her stooge police chief Murphy Paul have seen to that.

The cops have had it, and they’re about to fight back. Not with the Blue Flu like they’re doing in Atlanta, or with mass retirements like in New York, though quietly that’s happening – recruitment for the BRPD is a shambles and the force is diminishing. Instead, they’re after something a little more visual for the folks to chew on…

So the police union is now buying billboards welcoming people to Baton Rouge with a warning that they’ll probably get shot while they’re here, which you’d likely conclude is the police union conceding the fact that they’re no longer an effective organization. Given that the city has already had 46 murders…

Officials with the Baton Rouge Police Department say they are investigating a fatal shooting in the 3300 block of Linden Street Wednesday, July 15.

The shooting occurred shortly before 10 p.m.

Officials say the East Baton Rouge Parish Coroner’s Office was contacted after one victim died from injuries sustained in the shooting.

To say the city is on pace to blow away the record for murders in a year is wholly insufficient, but that isn’t the worst of this. The worst of it is that the BRPD, which has endured a host of its officers being shot over the past four years as the criminal element in the city has prosecuted a war on the police with the tacit endorsement of much of its political class, has essentially thrown up its hands and told the citizens that we’re on our own.

There’s an election this fall for mayor-president. There is no particular reason to believe that if Broome is re-elected things won’t get worse. But there is also no particular reason that no matter who wins, Baton Rouge is capable any longer of making things better. At this point the city is filled with people who can’t conduct themselves in an adult fashion, much less demand or receive responsible leadership.

People are leaving, quickly. The ship is sinking. What will remain of Baton Rouge in three years, much less 10, is debatable.

Interested in more national news? We've got you covered! See More National News
Previous Article Landry’s AG Opinion Savages JBE’s Mask Mandate; What Effect Will It Have?
Next Article GURVICH: The Decline And Fall Of The Louisiana Democrat Party