We don’t want to spend too much time on this, as it was no different from the usual COVID press conferences we’ve grown accustomed to by Louisiana’s wannabe dictator John Bel Edwards. But there are a couple of points we think are important to make in response to the things emanating from Edwards’ mouth, not to mention the people he invited to join him in yesterday’s dog-and-pony show intended to dissuade his fellow citizens from celebrating Thanksgiving next week.

Gov. John Bel Edwards gave a stern warning to Louisiana residents about the alarming rise of COVID-19 cases in the state and urged them to follow COVID-19 prevention guidelines during a news conference Thursday, Nov. 19.

Gov. Edwards, who was joined by two doctors, said the situation in Louisiana is dire with COVID-19 cases and hospitalizations on the rise for the third time this year.

“Make no mistake, Louisiana is in the third surge of this pandemic,” Gov. Edwards said.

Why would Louisiana be in a third stage of COVID? Would it be an indication that measures taken by Edwards to stop the spread of the virus in the first and second stages didn’t work? And if that’s the case, what does Edwards have to say to the people whose livelihoods he has destroyed with those measures?

The Louisiana Department of Health (LDH) reported more than 2,000 new cases of COVID-19 for the third day in a row Thursday. The number of COVID-19 patients hospitalized due to the virus also surpassed 900 for the first time since late August.

The governor said Thursday the number of hospitalizations in Louisiana increased by more than 250 patients in just one week. He said CEOs of Louisiana’s hospitals told him earlier Thursday that the outlook for the state’s hospital capacity was “grim” if cases do not trend downward.

What’s not so widely reported along with those frightening increases in case counts is that they’re the product of more than 84,000 tests performed around the state in just three days, including the new antigen tests which appear to be considerably more likely to generate false positives than even the PCR tests they’ve been using.

Guess what else is on the rise in Louisiana? Applications for unemployment benefits. You want to see a crisis? How about a quadrupling of applications in one week in a time period where the rest of the country actually saw a slight drop.

He’s sounding the alarm about a slight uptick in case counts and hospitalizations when the Louisiana economy is in a complete free fall.

Gov. Edwards called the rise in both cases and hospitalizations over the last few days a “disturbing trend” and said officials with the White House’s Coronavirus Task Force informed him that this surge was worse than the first two surges that happened in the spring and summer.

Of course it is, because the public health bureaucrats who’ve been wrong about pretty much everything where COVID is concerned have decided to ramp things up in advance of a Biden administration which wants a Great Reset for its own merits.

Now comes the part where all this is your fault.

He said the spread of cases was likely from people gatherings and failing to practice COVID-19 prevention measures over the Halloween weekend. The governor said it was critical that residents change their plans for Thanksgiving to ensure the gatherings were small and were only with members of their immediate household, otherwise the holiday would be a catalyst for cases to continue to rise at an exponential rate. Families should also anticipate minimizing gatherings for Christmas too, he said.

Got that? If you choose to actually live your life rather than shut it down to avoid contracting a coronavirus virtually everyone is going to get eventually and which more than 99 percent of everyone who contracts it will survive, then you’re the bad guy.

What he didn’t do was to mandate that people cancel Thanksgiving like his fascist counterparts elsewhere did.

Because of Edwards did that, he’d end up on the wrong side of some of his own folks. Like for example New Orleans Democrat state senator Troy Carter, who put this out today after Edwards squawked about how people should banish themselves from holiday celebrations… 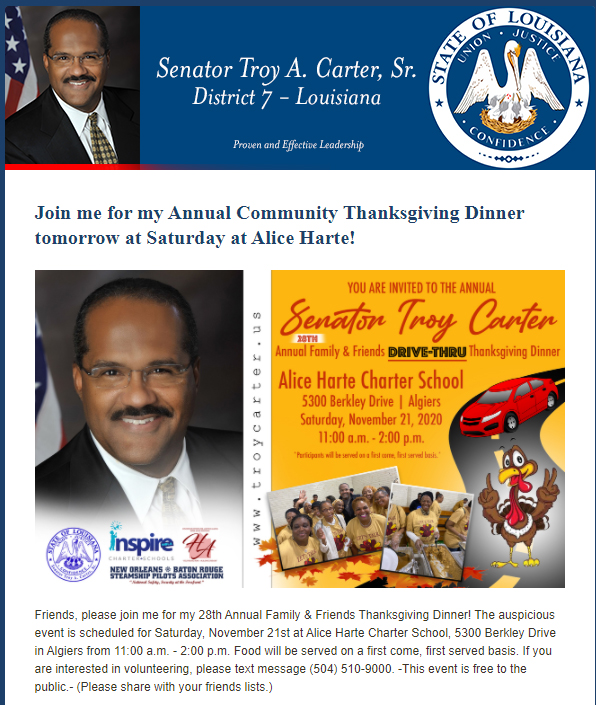 One of the governor’s two guest speakers at the news conference, Dr. Christopher Thomas with the COVID-19 unit at Our Lady of the Lake in Baton Rouge gave an impassioned speech imploring Louisiana residents to take responsibility to help their fellow residents and loved ones.

Dr. Thomas said he, himself, contracted COVID-19 earlier this year and called it a “scary” experience despite his medical knowledge and experience treating patients with the virus. He said he and his staff have treated the sickest patients they’ve ever seen during the COVID-19 pandemic.

The doctor said every Louisiana resident should consider themselves a “healthcare provider” because they have the ability to prevent the virus from spreading to others particularly, their loved ones.

Dr. Thomas said the issue with hospital capacity is not whether a hospital has enough beds but instead whether a hospital has adequate staff to care for both COVID-19 and non-COVID-19 patients. He said his staff is tired and stressed out and with more COVID-19 patients, the more likely hospital staffers are to contract the virus themselves. The doctor also said additional personnel cannot be brought in from other parts of the U.S. because hospitals in every state are also dealing with a surge in patients.

“We wouldn’t ask the LSU Tigers to play a game against three other teams,” Dr. Thomas said.

Tired and stressed out? At least they have jobs! When unemployment claims quadruple in a week and he’s whining about a hospital workload because there are 250 more people statewide in the hospital, it falls a bit flat, n’est-ce pas?

Dr. Joseph Kanter, LDH’s interim assistant secretary of public health, echoed Gov. Edwards’ message of keeping Thanksgiving holiday gatherings small saying the risk of transmission of the coronavirus is higher when you bring people from outside your home inside your home. He also said large gatherings inside without masks increased the chances for the virus to spread.

We guarantee that either Kanter or some other highly-placed LDH employees will have pictures posted at Facebook, Snapchat or Instagram of their Thanksgiving gatherings by next weekend. Does anybody doubt us?

Dr. Kanter called the progress being made by Moderna and Pfizer on COVID-19 vaccines “a light at the end of the tunnel.” However, Dr. Kanter said we have to focus on reducing cases and hospitalizations now.

Gov. Edwards added saying that once a COVID-19 vaccine is available it will take months before it’s actually available to the general public. Hospitals and nursing homes have the first priority in receiving the vaccine in Louisiana.

First of all, that’s because the general public isn’t under any great risk of mortality from the virus and the vaccine doesn’t have much of an impact on health outcomes – you really don’t need the vaccine if the virus isn’t going to kill you or even make you all that sick. And second of all, if it’s months before the vaccine is available here, that sure as hell doesn’t say good things about John Bel Edwards’ effectiveness in fighting COVID, does it? Why doesn’t he get off his ass and do a deal with Pfizer and Moderna to get Louisiana on the priority list for that vaccine rather than browbeat all of us to continue cratering our economy until there is nothing left?

“I think it is fair to say, there is light at the end of the tunnel, but I just want you to know it’s a very long tunnel. And if we want to live to see it, there’s some things we have to do today and continue to do until we can finally put this [pandemic] in the rearview mirror,” Gov. Edwards said.

It’s been more than eight months of his mandates and restrictions and there has been virtually zero positive effect from any of them in stopping the spread of COVID. And after eight months and all that money spent, all we hear is how we have to sacrifice our quality of life and livelihood for the benefit not of the old and sick in Louisiana, despite what’s said in these press conferences, but for the convenience of the state’s hospitals which are awash in money from Medicaid – some $15.9 BILLION budgeted for fiscal year 2021 in Louisiana – and the public health bureaucrats at LDH.

Increasingly, it’s more and more obvious Edwards is doing exactly what he and his cronies in the Louisiana Democrat Party accused Bobby Jindal of – playing to the media and his national party crowd in an effort to get out of Louisiana and satisfy larger political ambitions. The Biden crowd wants the Great Reset, and Edwards would give it to them in Louisiana if it wouldn’t destroy him before he could get himself appointed in the administration. So instead we get these preening pronouncements and smacking-gum lectures while the state’s economy burns to the ground.

The real question might be how many Louisianans decide to pack up a U-Haul and join the exodus out of the state before Edwards is able to make his own way off to bigger and better things. And if there will be anyone left to turn the lights out when his damage is fully done.