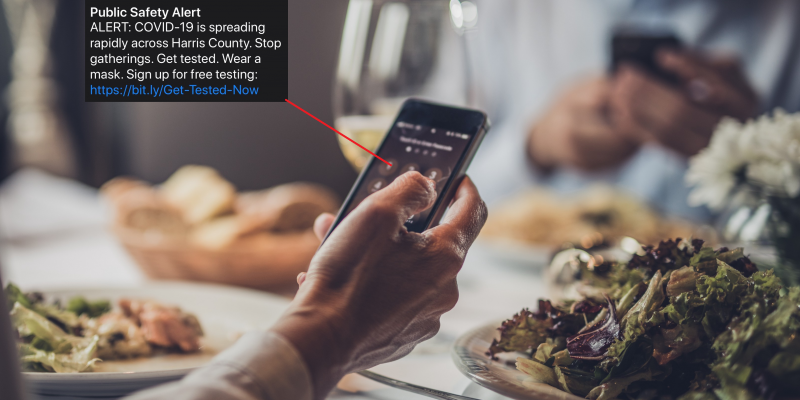 Some of our readers are aware that the New Orleans Advocate’s reporter Jeff Adelson, a striking mediocrity destined for a nondescript job in nonprofit or government-sector public affairs when he’s finally laid off at his current employer, likes to spend his time on Twitter indulging in exegesis and judgement of items he finds within these pages.

We had a current example of this yesterday, when, after Andy Hogue posted with helpful instructions on how to block from one’s phone unnecessary and stupid push notifications from local government apparatchiks, Adelson broke open on Twitter with howling about how damaging this site is to the public weal. 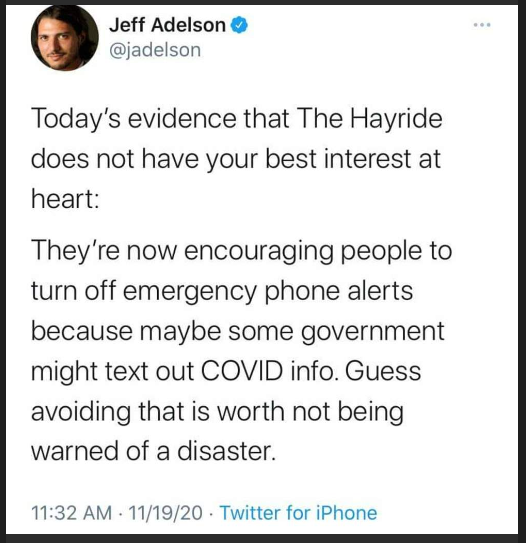 So what was it that Andy wrote which was so horrible? Well…

Officials in Harris County texted residents with an appeal to forsake Thanksgiving gatherings, obtain a COVID-19 test, and wear a face mask.

Harris County sent a similar COVID-19-related message in June. This was prior to a City of Austin message which sent what was widely seen as a politically charged message ahead of a Fourth of July protests against business closure mandates, but said nothing of the health risks of Black Lives Matters demonstrations.

With reports of COVID-19 cases on the rise, local officials are again flirting with various measures to control personal behavior, fearful of hospitals and health care facilities running out of space to care for patients (or leveraging that fear for additional revenue). Democratic Harris County Judge Lina Hidalgo said, via CBS DFW, that since late September, the number of average new daily cases in Texas’s most populous county has increased by 250%.

Andy noted that local governments have begun the politicization of push notifications, and this is an increasingly obnoxious bit of Big Brotherism which has gone largely without pushback from the public to date.

Reverse 9-1-1 came into being while riding a wave of popularity of Amber Alerts and similar notifications. Using GIS mapping technology and in cooperation with phone service providers, these messages have been used since the early 2000s, starting with a simple recorded voice call, moving to text messages, and now appearing as “push notifications” on phones. The method gained prominence in 2004 as the city of Granby, Colo., warned residents to steer clear of the path of the infamous “Killdozer.”

Now being used selectively to warn of politically unpopular gatherings (e.g. holiday celebrations) and not others (social justice protests), smart phone users may be looking for a way to disable these alerts.

And while his post tells iPhone and Android users how to disable these obnoxious notifications, Andy also takes pains to suggest that people still keep informed as to what’s happening around them, having a radio nearby and so forth. In other words, his post says the precise opposite of Adelson’s imbecilic, whiny characterization of it; Andy’s simply saying that as you maintain yourself as an informed citizen you don’t have to subject yourself to methods of that information you regard as intrusive, politicized or otherwise abusive.

And this, Jeff The Soy-Eating Servant Of Government Adelson simply cannot tolerate and must issue Angry Tweets about.

It’s only a matter of time before Jeff Adelson will be jettisoned from the ever-shrinking staff of the New Orleans Advocate and packed off to whatever bureaucratic career gulag he’s destined for. It’s our firm impression no one around here will miss him, or his inaccurate, judgy little tweets.