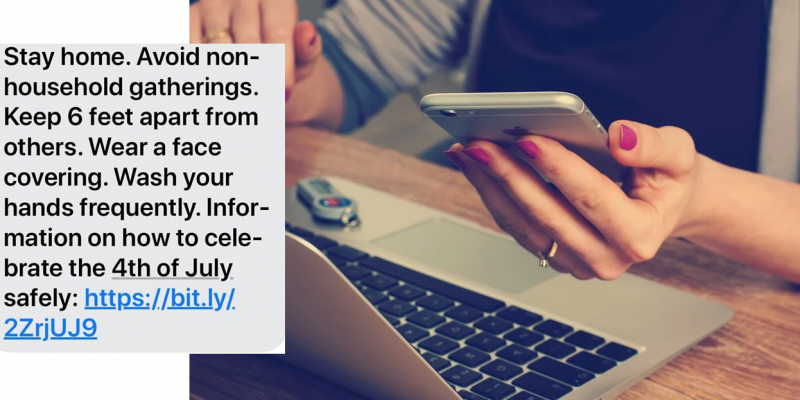 An emergency warning barged its way into text inboxes and voicemail folders on Wednesday in Austin.

The alert did not warn phone subscribers in the capital city of Texas of tornado activity or the possibility of property damage due to weekend or holiday riots. Rather, the alert warned anyone checking their texts, reading push notifications, or picking up the phone of the dangers of picnics, boating, and observing aerial fireworks displays.

You know, the dangers of celebrating the Fourth of July.

Activating the Warn Central Texas system, city of Austin and Travis County authorities advised COVID-19 cases and related hospitalizations are on the rise — a nearly 400% jump by certain measures, according to a joint press release.

“I know we want to celebrate; I know we want to get together with our families; I know we want to have firework shows and barbecue and do the things we normally do, but now is not the time for that,” said Dr. Mark Escott, the interim leader of Austin Public Health, in the release. “Now is the time we have to be strong together by staying home, by doing things within our own household, by watching the fireworks on TV.”

In addition, all parks and rec facilities in Austin will be closed over the weekend, including golf courses, tennis courts, boat ramps, and nature preserves and botanical gardens.

“Should the threat of COVID-19 continue to rise, the park system may remain closed beyond this date until further notice,” the release barked. Free COVID-19 testing and online self-assessments are being offered, but no word on whether that is contributing to the skyrocketing positive test numbers. See full press release here.

The release said cell phone users must sign up for the service, although the notifications go out to all land lines in the Austin area. Many Austin residents with cell phones were surprised by the notification, not recalling ever having signed up.

From the hip: The timing of this alert is suspect, although most everyone agrees at least some level of precaution is warranted.

It’s often said politics is about priorities. Nowhere is this more evident than the decision to activate what is essentially a reverse 9-1-1 emergency alert now rather than any other time.

Consider the attitude certain activist elements of the medical community are taking regarding crowds and COVID. According to a now-deleted open letter from 1,200 health care workers and epidemiologists in support of Black Lives Matter protests in early June:

“This should not be confused with a permissive stance on all gatherings, particularly protests against stay-home orders. Those actions not only oppose public health interventions, but are also rooted in white nationalism and run contrary to respect for Black lives. Protests against systemic racism, which fosters the disproportionate burden of COVID-19 on Black communities and also perpetuates police violence, must be supported.”

Keep in mind, these are many of the same activists pushing for COVID-19 lock-downs. According to their logic, BLM protests and even rioting is worth the risk of contracting COVID-19 because racial minorities have been subjected to unhealthy persecution in the past: political discrimination in innumerable forms, sub-par health care, a high level of incarceration, greater exposure to urban pollution, stress, etc. They say these problems persist in the form of “systemic” or “structural” racism and still need to be addressed. In other words, Austin and Travis County residents should not expect a wagging finger via an emergency alert the next time there is a left-of-center protest during this pandemic. They might even receive a green light.

With July Fourth coming up, let’s stop and think for a moment what the American experiment has done to eliminate many of those things that threaten life, liberty, and the pursuit of happiness. A republican form of government that set the standard for the world (which includes a right to protest). Open, frequent, and fair elections. The numerous technological and medical innovations that have saved countless lives and improved standards of living throughout the world. Religious freedom that formed the basis of missionary efforts across the globe. Defeating the Nazi regime and other bad international actors throughout the decades. If you think police violence is bad now, imagine what it was before habeas corpus. We could go on for pages with our love letter to the United States of America and our constitutional freedoms.

As Benjamin Franklin advised, we have “a republic … if you can keep it.” Franklin’s caveat is worth considering this weekend as we watch one freedom after the other sacrificed “to obtain a little safety.” Keeping America great is the best way to preserve our health and our livelihoods. Shouldn’t that be a priority, too?