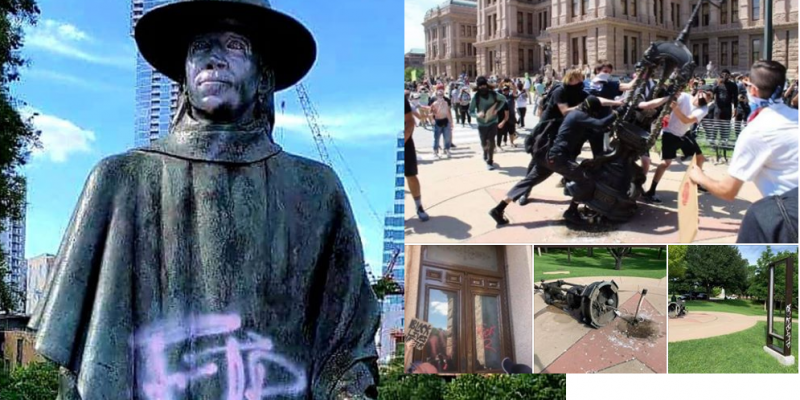 The protests are in reaction to a shocking incident of police violence in Minneapolis, Minn., in which a suspect died after being brutally detained by a police officer. A standard protest is scheduled for Sunday afternoon at the Texas Capitol, but radical Leftist elements took to the sidewalks Saturday vandalizing historic monuments, spray-painting profanity on edifices, and blocking traffic on Interstate Highway 35 which connects Texas to Minnesota. A historic fountain was uprooted and smashed on the capitol’s south lawn and many signs were destroyed. An iconic statue of Blues/Rock performer Stevie Ray Vaughn was painted with “FTP,” which supposedly means “[expletive] the police.”

“Texans have every right to exercise their First Amendment rights, but violence and looting will not be tolerated,” Abbott said in a brief press statement Saturday. Earlier, Abbott had dedicated 1,500 Texas State Troopers to defend Texas cities from expected rioting and looting.

Conservative Rep. Matt Shaheen took to Facebook to share some photos of the desecration at the Capitol.

“Elements of the Radical Left have attacked our State Capitol,” Shaheen wrote. “Destruction of the people’s Capitol by these extremists does not further needed dialogue.”

From the hip: Not much else needs to be said here except that leveler heads will be protesting on Sunday … we hope. Today’s vandals are the worst of the worst and deserve to be called out from both sides of the aisle.

Unfortunately, the press is having a difficult time discerning the difference between rioters and simple protesters. See video clip below:

MSNBC reporter just now: "I want to be clear on how I characterize this. This is mostly a protest. It is not generally speaking unruly."

The guy is literally standing in front of a burning building in the middle of a riot. pic.twitter.com/IzCV6On4sF

Interested in more news from Texas? We've got you covered! See More Texas News
Previous Article Dallas police and fire fund has enough assets to pay out 7.3 years of pension benefits, study finds
Next Article Conflicting reports over whether or not DARPA-funded AI warfare tool is being used to target pro-Trump accounts