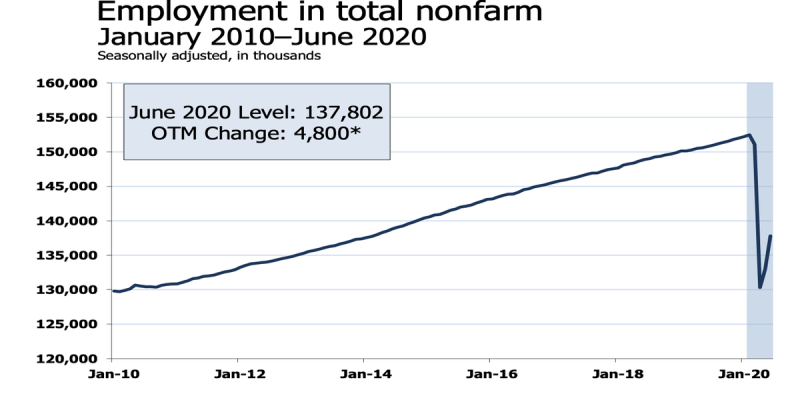 Call this conspiratorial thinking if you want, but the whipsawing back and forth between COVID-19 hysteria and street rioting over exceedingly rare deaths of black criminal suspects while resisting arrest – while we’re being told that those “mostly peaceful” protests have no effect in spreading the virus – is something unprecedented in the history of American media, and while it would appear to defy explanation it certainly does not.

Might we remind our readers that this is an election year?

Let’s frame this discussion properly. Yesterday a rather significant bit of economic news made its way across the wires…

The U.S. unemployment rate dropped to 11.1 percent in June as businesses shuttered by the coronavirus pandemic earlier this year rehired millions of idled workers.

May’s figure was revised up by 130,000 for the addition of 2.7 million jobs last month. Still, the nation’s jobless rate is up 7.6 percentage points compared to the start of the year, when it sat at a half-century low. There are 12 million more out-of-work Americans than compared to February.

Over the course of the past month, every state has started to navigate reopening their economies. But the unemployment level, which is still at the highest level in decades, is expected to remain elevated as social distancing guidelines remain in place, particularly as states fight a resurgence in COVID-19 cases.

So you had 2.7 million jobs created in May and 4.8 million in June. That’s the recovery of 7.5 million jobs in just two months. Is anybody in the media pushing that?

In a different time that’s what you’d expect. It’s an indication that the American economy, which they’re now saying was beginning to slide into a recession in February before the Wuhan virus/COVID-19 shutdown fiasco descended around the country and blew that recession into an economic depression to rival what happened after the 1929 stock market crash, is pretty damned resilient. After all, those jobs are coming back despite the fact the federal government is paying people not to work – in a not-small number of cases, unemployment is actually more lucrative than the jobs the folks don’t want to go back to.

And also despite the governors of more blue states than not doing everything they can to keep their states shut down.

Does the economy have a long way still to go to recover from the disaster of the COVID shutdowns? No question. But this recovery isn’t even really getting started yet, and it won’t until the media and the political class stop pushing hysteria and start treating it as what it is – a disease outbreak which is worse than, but similar to in terms of public health implications, a bad flu epidemic. It’s already fairly clear that the strain of the virus which is most prevalent now doesn’t impose particularly egregious health effects on most of the people catching it, and the more people test positive for the virus the more it’s clear that COVID-19’s death rate is similar to that of the flu.

Knowing what we know now we would not have shut the economy down in March.

Meaning that assuming the public tires of having poverty and inconvenience imposed on it in the name of public health, the bounceback is inevitable.

Ahhh, but this can’t happen.

It can’t happen because if it does and Americans return to feeling pretty good about the future of the country and even becoming contented about some of the life changes the virus has accelerated – working from home, homeschooling their kids and so on – and those changes bring about business innovations that even create excitement about the future of the economy, then how exactly do you beat Donald Trump with Joe Biden?

Let’s remember that 40 percent of the electorate thinks Biden might have dementia, which is not an impression Biden’s latest public appearance did much to dispel. Biden said that he’s taking “regular” cognitive tests, which isn’t something he’d have to do if people didn’t think he needed them, and he also called a reporter questioning him as to his competence a “lying dog-face.” That didn’t get much media play, surprisingly.

It’s fair to say that a party saddled with this as its nominee would be interested in creating sub-normal circumstances by which to skew the electorate.

Remember that back in May there was a POLITICO piece which got a lot of media attention about the panic the Democrats were in over a presentation given in April by Jason Furman, a former economic adviser to Barack Obama, the gist of which was that the economy would roar back to life once the COVID shutdowns were through.

I wrote this at The American Spectator about that piece…

Is there any other viable interpretation, as May turns into June, of the bizarre decisions made by the Gavin Newsoms, Gretchen Whitmers, Andrew Cuomos, Phil Murphys, J. B. Pritzkers, John Bel Edwardses, and Roy Coopers of the world but that they’re trying to stall the economic recovery as long as they can?

You really can’t explain it any other way. Not after that mythical curve got flattened. Persecuting barbers and fitness club owners and arresting surfers does nothing to promote public health. We already know that, even though the CDC and the other public health nerds can’t tell you from one day to the next what their judgment is on how far the virus can travel in midair, how long it lives on surfaces, and so on, being outside in the sun is awfully good for you if you want to avoid getting sick from COVID-19.

And yet these clowns are doing everything they can to ensure that people stay home.

It isn’t to keep people from getting sick. By now it’s obvious that staying home doesn’t keep you from being sick. More people got sick in the states with the strictest shutdowns than in the states that either never shut down or opened back up quickly. That was also true internationally.

The Democrat governors are the ones insisting on keeping restrictions in place long beyond what the data would suggest. They’re the ones insisting that everyone wear a mask, more as a test of the subservience of the public than as a public health measure. Those masks are good for one thing, which is to symbolize the fear people are supposed to feel as a result of the virus. And panicked people do not a robust economy make.

These governors are heaping idiotic restrictions on businesses attempting to open back up. In Louisiana, for virtually no discernible reason Edwards decreed that restaurants could only reopen their seating areas at 25 percent capacity — including staff. As no restaurant could make a profit under such a stricture, many restaurants, particularly in New Orleans, which is governed by a mouth-breathing socialist caudillo of a mayor in LaToya Cantrell, have said, “No thanks; we’ll wait.” Others are open and flagrantly violating the 25 percent rule, because why pay obeisance to tyranny?

Meanwhile, vaccine tests are hampered by a lack of new virus cases, hospitalizations are dwindling as hospitals begin a fight for economic survival with furloughs and layoffs becoming the nationwide norm, and as testing ramps up greatly the CDC is sheepishly admitting the coronavirus’ death rate is 0.26 percent. As almost half of the deaths from the virus come now in nursing homes, an industry whose operators are waist-deep in electoral contributions to Democrat machine politicians (though not exclusively so), the real rate for most Americans is closer to 0.1 percent.

Which is an awful lot like the flu. But you aren’t supposed to compare this to the flu.

Look, we could go on and on here. But the point isn’t complicated; nor is it particularly arguable. Democrats are trying to keep the economy closed because it’s more important to beat Trump in November than for the country to succeed. You can call that bad faith, or you can call it economic treason — call it what you want. But don’t call it a conspiracy theory.

Don’t call it a conspiracy theory, because they admitted it to Politico earlier this week. One last quote from the piece:

The former Obama White House official said, “Even today when we are at over 20 million unemployed Trump gets high marks on the economy, so I can’t imagine what it looks like when things go in the other direction. I don’t think this is a challenge for the Biden campaign. This is the challenge for the Biden campaign. If they can’t figure this out they should all just go home.”

So how do you meet that challenge?

The day before the POLITICO piece hit, a cop in Minneapolis killed a counterfeiting suspect by kneeling on his neck after the suspect resisted arrest. The streets of that city exploded in protests, despite the fact the cop and three other policemen who had been on the scene were fired, and by the end of that week the cop had been charged with second-degree murder.

Exactly what else needed to be done in order for the system to deal with George Floyd beyond charging Derek Chauvin as he was, we’re not sure.

Nevertheless, riots exploded all over the country. Stores were looted, businesses were burned, people were killed. “Systemic racism,” whatever that is, was decried. And before you knew it Corporate America was falling all over itself to get in league with a fringe Marxist organization that had publicly demanded all kinds of insane things like the abolition of the nuclear family, some $14 trillion in reparations for black people and so forth. None of which the major media has bothered to inform the public about.

And the fringe Marxists followed up their riots with a campaign to knock down every historical landmark they could – not just landmarks related to the Confederacy and Southern culture and history, but those dedicated to the country’s founders.

Democrat political leaders at the local and state levels stood by and watched, when they weren’t actively participating in the willy-nilly destruction. And local and national media reported the Talibanesque iconoclasm as though it was a good thing.

Things have gotten so bad that people living in private gated neighborhoods invaded by “mostly peaceful” protesters shouting obscenities and threats, who defend their property with lawfully-obtained firearms and drive away those protesters without physical violence, are under threat of prosecution by a leftist Democrat circuit attorney. And the Democrat media is treating that as if it isn’t insane.

And everyone you talk to is petrified about the future of the country, and has all but written off the President’s re-election hopes.

It’s July. The vast majority of Americans are nowhere near thinking about the election. But whatever media buzz there would be about the resiliency of the economy has been buried by talk of riots and mask mandates and assurances that riots have nothing to do with spreading the virus (though bellying up to a bar for a much-needed cocktail is a “super-spreader” event, dontchaknow).

Interested in more national news? We've got you covered! See More National News
Previous Article BAYHAM: How Many More Fourths Of July Does America Still Have In The Tank?
Next Article Text Alert: July 4th Fireworks Canceled (But Protests OK)