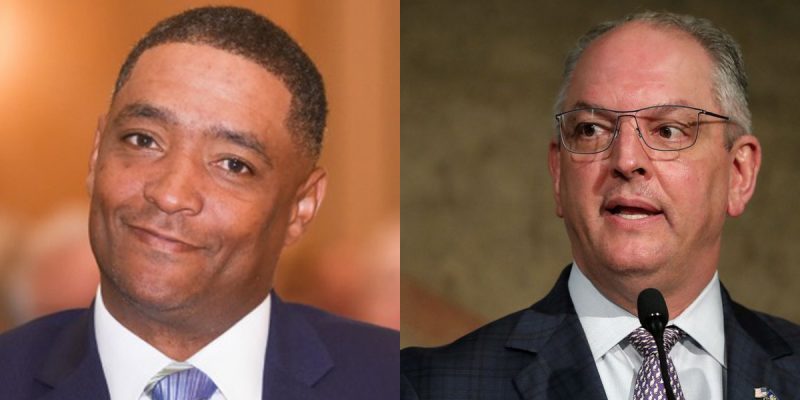 Are they staying or are they going? Chances are the former for Democrats Gov. John Bel Edwards and Rep. Cedric Richmond, but for different reasons.

With more certainty that Democrat former Vice Pres. Joe Biden will secure enough electoral votes to win election to the White House, speculation has started about the futures of the two most prominent Democrats in the state, that they could move on to jobs in a future Biden Administration. Richmond is a Biden friend and co-chairman of his campaign, while Edwards is the party’s only governor in the deep south, a region that Democrats hoped to improve upon their performance but instead, outside of the razor-thin presidential contest in Georgia, as a whole underperformed.

But Richmond has plenty of reasons to stay in his post, starting with it’s his job for life that could lead to a prominent congressional career. Already having headed the Congressional Black Caucus, within a decade he could be jockeying for party leadership in the chamber. Additionally, over the next four years he could wield much influence particularly from 2023-24 because of his friendship with Republican Rep. Steve Scalise, the second-ranking Republican. With Democrats barely holding onto a House majority, history assures the GOP will take control of the House in two years, and because of a White House connection Richmond will be the most powerful Democrat when they become the minority with his ability to grab Scalise’s ear.

Edwards has plenty of reasons to bolt the state. Given the state’s economic performance – the country’s worst since Edwards began his second term – and his mishandling of the Wuhan coronavirus pandemic – under Edwards lockdown policies which contributed to the poorest economy compared to all states Louisiana has the most per capita virus cases and among the most virus deaths – he would be trounced if trying to challenge popular incumbent GOP Sen. John Kennedy in 2022, before leaving office a year later.

Yet an escape hatch for Edwards seems unlikely. The idea rests on an assumption that Biden, with Republicans controlling the Senate still (after extremely likely wins in two unsettled contests), will nominate more moderate Democrats for administration posts. Edwards since becoming governor has backed pro-life measures and not opposed robust Second Amendment rights, making him appear more moderate ideologically, thus making for an enticing nominee. And it wouldn’t bother Democrats to see GOP Lt. Gov. Billy Nungesser flip the state’s top office upon an Edwards exit, as he has buddied up to Edwards more than any of the other Republican statewide elected official.

This view, however, ignores political reality, beginning with the deceptive idea that Biden is himself a more moderate liberal. In fact, in his last four years in the Senate before becoming vice president, he was the fifth-most liberal senator, and has kept drifting in that direction the past dozen years. He’s definitely hard left, if not crazy extreme left.

Which is what the party’s congressional leadership and activists are, who really will be calling the shots. To them, Biden is a transitional figure who will undergo a very damaging investigation early in his term concerning the very credible evidence that “the big guy” colluded with a Chinese intelligence operation. This added to his declining physical (he regularly calls it a day before noon in meeting with people) and mental (his well-known dozens of instances where he has appears confused in public) capacities will prompt the far left to half-heartedly, if at all, defend him. Chances are he will resign prior to the end of his term to elevate a card-carrying member of the extreme left, Democrat Sen. Kamala Harris, to the presidency.

These people don’t want Edwards around. At best, he would receive a low-level offer not worth his time he could spend trying to hold back progress from the Governor’s Mansion for the next three years, and he’ll stay put.

Having the pair evacuate the state would make political life much more interesting in 2021, but don’t hold your breath waiting on it.