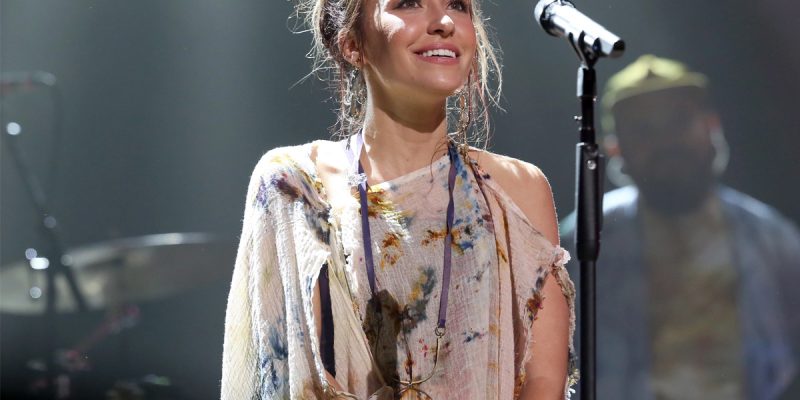 Yesterday we laid down the basics of the jihad New Orleans mayor LaToya Cantrell launched against Grammy-winning Christian singer and Louisiana native Lauren Daigle, attempting to get her canceled for the sin of singing a song at a November prayer rally in that city’s French Quarter. Daigle was scheduled by Dick Clark Productions to sing Auld Lang Syne at midnight on New Year’s Eve from Jackson Square on national TV, and Cantrell threw a fit over it – saying that the November appearance put the city’s residents in danger and therefore Daigle isn’t welcome to perform in New Orleans anymore.

The off-putting high-handedness of Cantrell’s communications has reverberated around the state, and it drew the attention of the state’s attorney general. Jeff Landry put this tweet out yesterday…

BREAKING: Today I stood up to New Orleans Mayor LaToya Cantrell for targeting Christian music performer LAUREN DAIGLE just because she expressed her faith through song at a protest. The same Mayor who has not attacked other protests or recent Conventions. See my letter here. pic.twitter.com/dSg4zppZI2 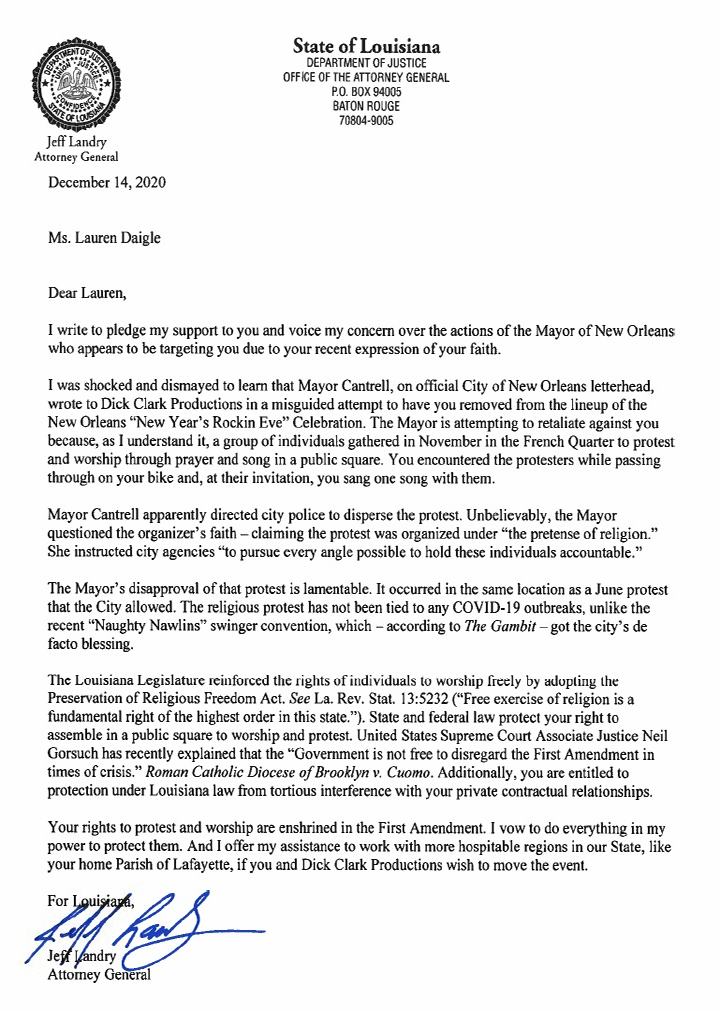 What Landry said toward the bottom is the most notable part of the letter; namely, that Cantrell’s actions amount to tortious contractual interference on the part of the city of New Orleans.

It isn’t that Lauren Daigle is known to have COVID-19, and therefore there is no particular reason to say that her appearance on a New Year’s Eve telecast from somewhere in Orleans Parish would put anyone at risk of exposure to the virus. Cantrell can’t say that allowing her to sing at Jackson Square would violate some sort of security interest the City of New Orleans might have; her objection to Daigle is meant to punish her for singing a song in public in November.

LaToya Cantrell is not a queen, and she isn’t a dictator. Clearly the role of mayor doesn’t satisfy her lust for power, which is unfortunate for her because she’ll never be elected to a higher position than that (she might not even be the mayor much longer).

Landry also suggested the event be moved to Lafayette rather than New Orleans, which Lafayette mayor Josh Guillory jumped on this morning…

We would be honored to host @Lauren_Daigle to ring in 2021. It would be a truly great way to safely say goodbye to 2020! #WelcomeLauren #HappyNewYear #Goodbye2020https://t.co/mMg1w7quOQ

You do have to feel for the folks at Dick Clark Productions, as they’re now being sucked into a local political fight two weeks before putting on a multi-venue TV extravaganza. This is the last thing they wanted, and they have nothing whatsoever to do with it. Lauren Daigle is the hottest property among Louisiana musicians and they’ve for the last few years done a spot in New Orleans to mark midnight Central time with someone who’s local, so Daigle makes sense.

Someone with average intelligence and rudimentary manners as mayor of New Orleans would try to avoid airing her dirty laundry like this, but LaToya Cantrell isn’t capable of that. She can’t help but to make her city look as bad as possible, because Lauren Daigle is everything LaToya Cantrell is not.

And by the way, it isn’t just LaToya Cantrell who’s problematic in New Orleans. Check out some of the reactions to Landry’s tweet announcing support for Daigle…

Which is entertaining, because, at least according to the official story, Lauren Daigle didn’t summon anybody in November and her one-song mini-concert was an impromptu affair – so while “Ryan Kurr” is accusing Daigle’s fans of being ignorant that appears to be a label fitting him. 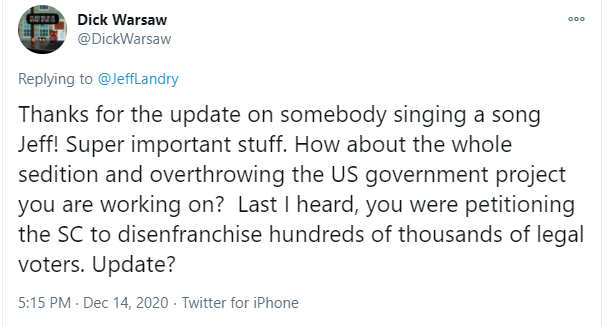 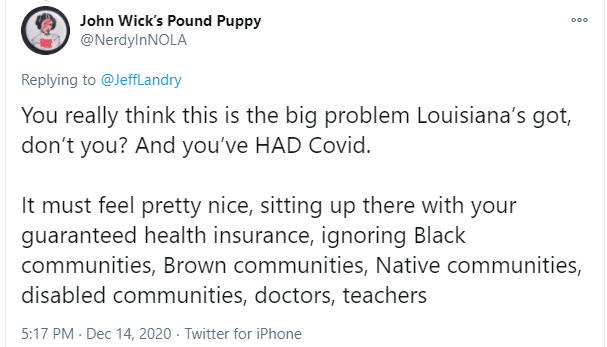 There were also tweets in support, but not from New Orleans that we could see.

The lesson being that there are at least some people left in that city who are still willing to step forward and show that they deserve LaToya Cantrell.

But they don’t deserve Lauren Daigle.

Interested in more news from Louisiana? We've got you covered! See More Louisiana News
Previous Article APPEL: On Rockets And Progress
Next Article WAGUESPACK: Always Compete, Especially When Your Back Is Against The Wall