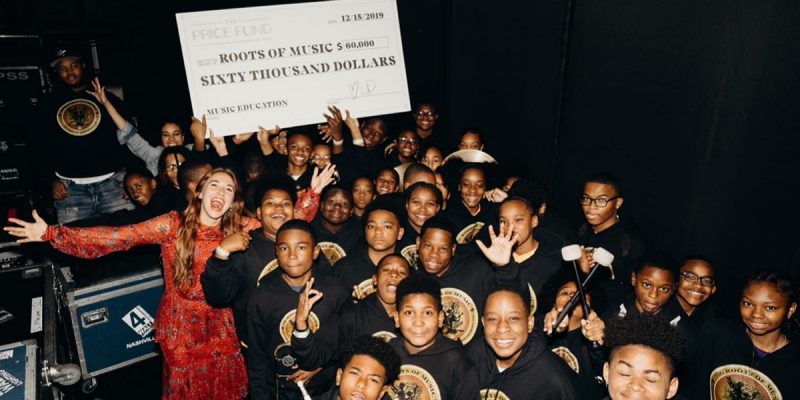 One of the most glaringly obvious lessons of 2020 is the monstrous discrepancy between the quality of the American people, or at least most of us, and the country’s political class, particularly in the major cities. Take LaToya Cantrell, for example.

Back in November, there was a Christian rally and prayer event that took place in Jackson Square in New Orleans. About 400 people participated. Grammy-winning Christian singer Lauren Daigle, who is originally from Lafayette, took part in the event and gave an impromptu (or perhaps not all that impromptu) concert.

This happened in a city which, back in June, allowed Black Lives Matter demonstrators to congregate over and over again, going so far as blocking an interstate highway and even attempting to block the Crescent City Connection over the Mississippi River before the New Orleans Police Department finally did something about it. LaToya Cantrell had nothing whatsoever to say about the BLM protests, even when they resulted in wanton destruction of private property – and even public property, such as when a bust of John McDonogh was ripped off its pedestal and thrown into the river, only to be rescued by a group of patriotic Americans who Cantrell treated as thieves for not returning it immediately (to the custody of people who allowed it to be destroyed in the first place).

But when Daigle showed up to sing a couple of uplifting songs to a small group of 400 people at an outdoor prayer event where the participants not only didn’t tear anything up but actually picked up after themselves, it was more than Cantrell could take. She had the NOPD demand that everyone who was there at the Nov. 7 event get themselves tested for COVID and isolate in the meantime, and she publicly threw a fit. “While this was under the guise of a religious activity or event, we know it put our people in danger,” she howled. Cantrell decried “the pretense of religion to hold this event with other motives. And that simply was not right.” Not only that, she vowed to  “pursue every angle possible to hold these individuals accountable.”

Friday we found out what that meant. Dick Clark Productions had booked Daigle as a performer for its Jackson Square New Year’s Eve event which is scheduled to be televised worldwide. And this happened…

In a letter sent Wednesday to executives with Dick Clark Productions, Cantrell said, “I cannot in good conscience support the involvement of singer Lauren Daigle, who just last month participated in an unpermitted live performance which placed my residents in danger and threatened the tremendous progress New Orleans has made in combating the COVID-19 pandemic.”

In November, Daigle performed during a “Let Us Worship” event near Jackson Square.

Cantrell said Daigle “should not be rewarded with national media exposure and a public spotlight.”

The Mayor maintains Daigle put the people of New Orleans at risk of contracting COVID-19 and says Daigle, “strained” first responders in the midst of a public health crisis.

Cantrell did express gratitude for the show broadcasting from New Orleans, but said, “We cannot abide the participation of an entertainer who put our people in harm’s way.”

Friday afternoon, Communications Director Beau Tidwell said, “Mayor Cantrell met with Ms. Daigle today and is always eager to engage with all stakeholders on matters of public health and public safety. The Mayor’s concerns regarding Daigle’s actions in November remain the same.”

We’d like to point out that we don’t see a whole lot of evidence that New Orleans had made any progress in fighting COVID. We see that they’ve made tremendous progress in killing off the city’s private economy, but it’s fairly apparent there is plenty of COVID in New Orleans despite all those efforts. Assuming they’re honestly made toward killing COVID rather than the private businesses, that is.

At least Lt. Governor Billy Nungesser had enough stones to tell Cantrell to bug off. Here was the statement he gave when this blew up on Friday…

The last four years the State of Louisiana and Louisiana Office of Tourism has sponsored ABC’s “Dick Clark’s Rockin’ New Year’s Eve” broadcast to millions of viewers from the iconic Jackson Square at midnight CST after the ball drops in New York, promoting the City of New Orleans and our state. After 4 years of record breaking tourism welcoming over 53 million people to Louisiana, we thought it was important that we highlight our state and our Ambassador, two time Grammy Award winning singer, Lauren Daigle. We were also planning to honor healthcare and essential workers.

Lauren is also the state’s voice of the Sunshine Tourism Recovery Plan. Tourism is the 4th largest industry in our state generating over $19 billion in revenue for our economy. It is vitally important we reintroduce Louisiana to the country and the world as a safe and enjoyable destination post Covid-19 with the only live broadcast in the U.S. The 6 minute live presentation would have included videos promoting every corner of the state. We bought the rights for Lauren to record her rendition of “You Are My Sunshine,” written by the late great Louisiana Governor Jimmie Davis. The centerpiece of The Sunshine Plan Recovery Plan launch is joy found in life and life and travel throughout Louisiana. At midnight Lauren have would led the nation singing “Auld Lang Syne.”

Unfortunately, Mayor Cantrell said no to Lauren Daigle performing on the telecast in the City of New Orleans.

The state was willing to move the location to a riverboat anchored in Gretna with New Orleans as the back drop. Mayor Cantrell then sent a letter to Dick Clark Productions asking them to exclude Lauren from any New Year’s Eve production.

I am shocked and disappointed that the Mayor would attack one of our own in this manner.

The Sunshine Plan is based on travelers level of confidence. This provides grant funding for CVBs statewide. We have successfully completed the first step in promoting in-state Staycations. We have successfully begun the second step by reaching out the regional 150 mile drive market. The next step is attracting national visitors in the next 3-9 months. Lastly, we will welcome international visitors to return when it is safe. It is unfortunate Mayor Cantrell can’t see and work together with the state and our office to make this possible for 2020.

Lauren Daigle, by the way, is a little more than the voice of the tourism recovery plan. She’s also a significant philanthropist, having given out almost a quarter-million dollars to youth programs in New Orleans…

A year ago, @lauren_daigle gave over $240,000 to support youth programs in New Orleans, in one weekend. This is not the girl you cancel.

What has LaToya Cantrell ever done for anybody out of the goodness of her heart? She won’t even pay her taxes. And she taxes taxpayer money on trips to Cuba and Africa for no legitimate public-policy purpose.

At some point, people are going to have to start getting tired of the kakistocracy that persists atop the governmental structures of our cities and other places, and start demanding that we do better than control-freak troglodytes like LaToya Cantrell. It used to be an embarrassment. Now it’s a threat to our way of life.

Hopefully, Dick Clark Productions will cancel its broadcast from Jackson Square and have it in Jefferson Parish instead.