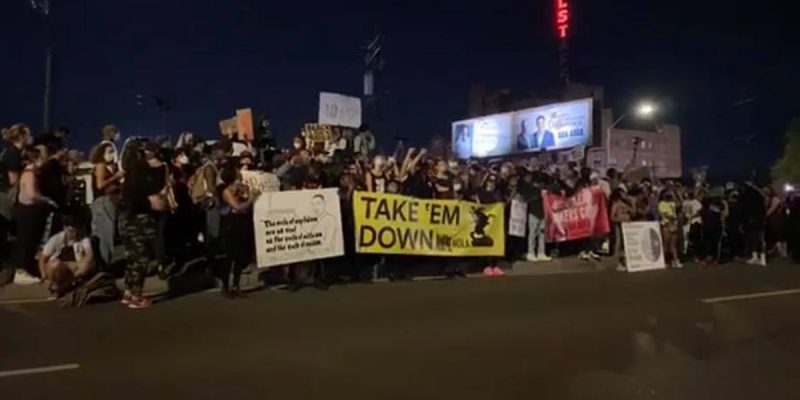 When the drive to topple statues of Confederate leaders and military figures was picking up steam, I warned that the movement would not stop with the men in gray but would become an open-ended permanent crusade to bowdlerize memorials to people who had nothing to do with the Civil War.

Consider who’s behind and aiding and abetting these drives: opportunistic politicians preening for a sympathetic left wing media, Democratic political activists and operatives who see electoral benefits by generating social friction, and the unwashed Marxists and anarchists who ought to be dismissed as fringe extremist elements but are mischaracterized by the media as sincere “local’ “stakeholders.”

Now would you accord credibility to a man who was an avowed Maoist and publicly declared that a particular person is an illegitimate public representative of a city district because of her race?

Because that’s an accurate description of one of the most prominent leaders of the monument removal campaign and ought to call to question why a group of radical cranks aren’t dismissed for what they are.

Now Andrew Jackson has been locked in the sights of the anti-monuments men since then-Mayor Mitch Landrieu hurriedly (and in the case of General Beauregard’s equestrian statue, illegally) hauled away four Civil War-related memorials to give his administration a justification for its existence.

The real monuments to Mitch Landrieu’s maladministration are the moldering Municipal Auditorium and poorly planned new airport that is big on both drywall and navigational inconvenience.

Fortunately for the Nola casting of the equestrian statue of Old Hickory, the latter-day Marxists are frustrated by its prominence as a symbol of the Crescent City thus the reluctance of even a decidedly left-wing city government to cooperate with the swarm of protestors who loitered, though thankfully not looted, about the French Quarter.

It also helps that just as the forces he commanded on the plains of Chalmette were protected from harm by a stout rampart, Andy Jackson’s iconic monument is protected by a just as formidable perimeter high wrought iron fence.

Having witnessed the removal of Beauregard’s statue at City Park and observed the massive equipment utilized, it’s going to take more than symbolic ropes and “hey-hey, ho-ho” chants to depose the Hero of New Orleans in the War of 1812 from his granite pedestal.

Sans cooperation with City Hall,  the protesters have run into a stone wall regarding the Jackson statue.

But protests need attainable objectives or they peter out and their eyes scanned for low-hanging fruit on their voluminous historical Enemies’ List.

Enter John McDonogh, a wealthy philanthropist whose estate established schools in Baltimore and New Orleans, several of which still bear his name.

McDonogh was a slaveholder though he was ahead of his peers by providing a system of manumission by which slaves could become free.

But his true legacy was a living one, providing educational opportunities for poor children, regardless of color, through the construction of McDonogh schools that numerous generations of New Orleanians have passed through and gained knowledge and skills that allowed them to advance in life.

Yet McDonogh’s munificence wasn’t enough to dissuade a mob from ripping his bust from a memorial near City Hall, haul his head across the French Quarter, and then with much fanfare clumsily tumble it into the Mississippi River.

Mind you that at no point did the police intervene in this brazen act of vandalism in the middle of the day, nor did the authorities stop the crowd from making off with the bust nor prevent them from jubilantly dumping the monument into the river.

Furthermore the city of New Orleans did not even bother retrieving the McDonogh bust for a full day, as it was removed from its ignoble underwater resting place along the river bank by a group of volunteers who utilized ropes and boards to extract it.

Now the city is demanding the bust’s return, perhaps so it could join Lee, Beauregard, and Davis inside a crate at a city warehouse.

Thus far only two vandals have been arrested, though it’s puzzling why that number is so low in light of the huge crowd that was engaged in the bust-napping.

Anyone who thought for one second the monument removal crusade would be limited to the clearing of only Confederate memorials was being intellectually cowardly or spectacularly naive.

Many of these permanent protesters loathe George Washington as much as they do Robert E. Lee because the ultimate goal in this crusade is the villainization of our Founding Fathers and by extension their intellectual legacies the Declaration of Independence, the US Constitution, and the Bill of Rights.

Removing historic statues is a Stalinist act to smash the established order and supplant it with a new invasive socialist ideology that will remake the country into their Marxist image.

Removing the Confederate memorials was the precedent of legitimizing an act that is the trademark characteristic of history’s worst actors: the Jacobins, the Nazis, the Communists, the Taliban, and ISIS.

Going after McDonogh not only normalizes the act but sets a new threshold for this imbecilic crusade.

What was once ostensibly about eradicating monuments to treason (hypocritically screamed by the same goons who burned American flags at these protests) is now about removing statues of any and all slaveholders, a path that leads from Duncan Plaza through Jackson Square to Monticello before cutting over to Mount Vernon, the final destination of the neo-Bolshevik’s destructive march through American history.

These unlawful mob actions are about demonstrating power and instilling fear in those who don’t subscribe to their leftist agenda.

The McDonogh ripping and tossing is a milestone as it is a monument removal not by a deliberative (albeit preordained) action by the local government as was the case in the “Landrieu 4” but by increasingly emboldened protesters, who have prearranged legal counsel and an expectation of light sentencing, assuming they receive any punishment at all.

John McDonogh won’t be the last notable whose monument will have the crowbar taken to it, but the vandalization marks the start of a second phase of the local monument targeting crusade.