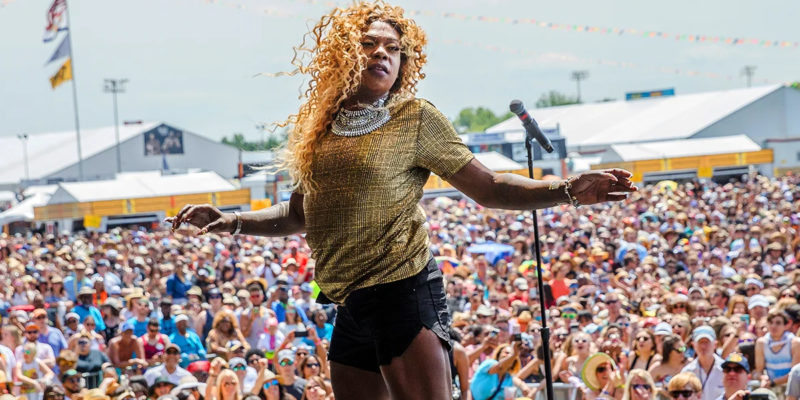 This isn’t something we particularly care about, but it’s a pretty blatant sign of the times in New Orleans. After Christian singer Lauren Daigle, who was surely going to deliver a pretty breathtaking version of Auld Lang Syne as the clock struck midnight on New Year’s Eve, was bounced off the Dick Clark New Year’s Eve broadcast from the Big Easy because of a hateful grudge against Daigle by that city’s mayor LaToya Cantrell, the production company scrambled to put something else together that would be more pleasing to Her Honor.

Bouncing, twerking, trannies, that is.

Big Freedia will serve as the host of the New Orleans show while Morton will perform the classic “Auld Lang Syne” as part of the lead-up to the countdown to the fleur-de-lis drop at midnight.

This is a broadcast event, closed to the public.

“We are beyond excited that Big Freedia and PJ Morton, two of New Orleans’ brightest musical lights, will be shining for our city and before the entire world as we ring in the new year. Even though we won’t be watching this performance in person, we will be watching from the safety of our homes as ‘Dick Clark’s New Year’s Rockin’ Eve with Ryan Seacrest 2021′ rings in the new year with that special New Orleans flavor. We’re also excited that this event will employ nearly 70 local crew members, many of whom have been shut out of production jobs due to the pandemic, and that the world will remember that New Orleans will be the safest place to visit and enjoy our music and culture in 2021,” said Mayor LaToya Cantrell.

Wonder what Dick Clark would think of this…

Yes, correct. Bounce music is the worst shit ever. And it’s New Orleans’ latest cultural export, assumedly to be put on display for the Dick Clark New Year’s Eve audience.

It’s not like nobody knows who Big Freedia is, but one would generally expect that the mayor of New Orleans would be less than enthusiastic about encouraging a national TV production in the city to feature that. There are lots of other New Orleans cultural figures who could MC the show.

New Orleans bounce star Big Freedia, whose legal name is Freddie Ross Jr. was sentenced to three years of probation Thursday (Aug. 25) in the U.S. District Court of the Eastern District of Louisiana. She was fined $35,000, to be paid in increments of $500 per month, and she must do 100 hours of community service.

In addition, Ross must undergo periodic drug testing, having repeated failed drug tests while free on bond. Ross will also have to provide financial disclosures.

U.S. District Judge Lance M. Africk pronounced the penalty for continuing to receive Section 8 federal housing assistance vouchers after Ross was found to be earning too much money to be eligible for government aid.

That was last year. It wasn’t a million years ago. The arrest for the crime happened in 2016, which was before Freddie became the Queen of Bounce.

So transsexual drug addicts who scam the federal government out of 35 grand while pushing absolutely unlistenable pornographic noise pollution can get top billing in New Orleans while award-winning, big-dollar Christian singers get canceled for…singing in public. And the city spends $500,000 extra that it doesn’t have to put the Queen Of Bounce show on, because the state tourism department was backing Daigle’s appearance and won’t back Big Freedia.

And yes, there is a racial component to this. There is no point in denying that.

Let’s stipulate that PJ Morton is great. Getting him some exposure is a great thing. That could have been done with Lauren Daigle onstage, too, though.

At this point not only is New Orleans dead. It deserves to be dead. The place has gone so far downhill it’s a disgrace to the rest of the state. And there is nothing anyone can do about Cantrell other than refuse to do any business with New Orleans until she’s gone.


Interested in more news from Louisiana? We've got you covered! See More Louisiana News
Previous Article SADOW: Rispone Still Doesn’t Really Understand Why He Lost In 2019
Next Article The Casino Business Is Dying In Louisiana