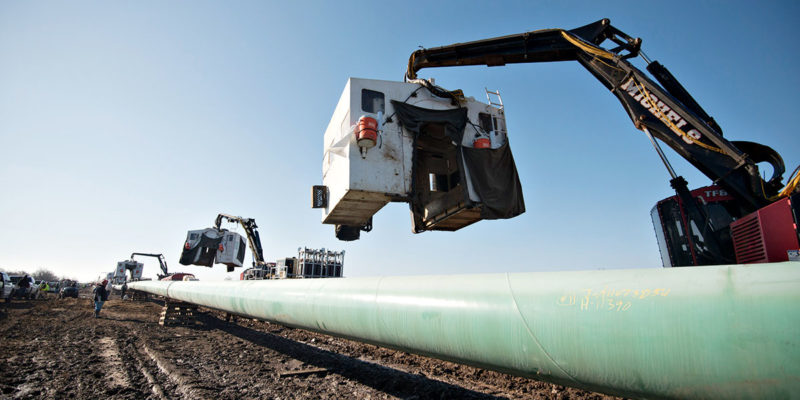 Canadian company TC Energy is suspending work on the Keystone XL oil pipeline as President Joe Biden followed through on his pledge to revoke its federal permit.

The 1,700-mile pipeline project was first proposed in 2008. It was blocked by former President Barack Obama, citing environmental concerns. But revived under the Trump administration.

The pipeline, if finished, would carry approximately 800,000 barrels of oil a day from Alberta, Canada, to the Texas Gulf Coast. Passing through six U.S. states, the project has faced multiple legal challenges.

“As a result of the expected revocation of the Presidential Permit, advancement of the project will be suspended,” Calgary, Alberta-based TC Energy said in a statement.

Alberta Premier Jason Kenney tweeted and published a lengthy statement saying that he was “deeply concerned” about Biden’s repeal.

“Doing so would kill jobs on both sides of the border, weaken the critically important Canada-U.S. relationship, and undermine U.S. national security,” Kenney said.

Marty Durbin, president of the U.S. Chamber of Commerce’s Global Energy Institute, said Biden’s decision will put thousands of Americans out of work and isn’t based on science.

“The pipeline – the most studied infrastructure project in American history – is already under construction and has cleared countless legal and environmental hurdles,” Durbin said in a statement. “Halting construction will also impede the safe and efficient transport of oil, and unfairly single out production from one of our closest and most important allies.”

Consumer Energy Alliance (CEA) President David Holt said, “President Biden bowed to the demands of a handful of special interests on his first day in office at the expense of American laborers, workers, families, and small businesses who depend on reliable energy.”

Pipelines and advanced pipeline technology provide the safest method for transporting energy, the Department of Transportation reports. The quantity of oil the Keystone XL would carry every day is equal to 4,150 trucks or 1,185 rail cars, Holt notes.

“This is a pipeline that has already committed to being zero carbon emissions and operated by 100% renewable energy,” he said. “It is unfortunate that, in this instance, ideology has trumped common sense, and will achieve the opposite environmental effect than was intended.”

Critics argue not completing the pipeline will reverse more than a decade of work accomplished by the Department of State, Department of Energy and PHMSA. The agencies concluded that Keystone XL would be “an incredibly safe pipeline with state-of-the-art monitoring technology, would lower gasoline and diesel prices and would reduce carbon emissions associated moving oil into American refineries.”

“Shutting this project down at a time when the U.S. has returned to being a net oil importer and lost the energy independence that took decades to achieve will, once again, put energy prices in the hands of foreign nations at the cost of our families and small businesses,” Holt added.

Revoking the permit defies environmental and economic logic, the Heritage Foundation said in a statement.

“The climate impact of the pipeline will be practically undetectable, as confirmed by the Obama administration’s Environmental Protection Agency and State Department’s environmental impact assessment. Blocking Keystone XL isn’t going to stop the production of Canadian oil or prevent oil from reaching refiners in Texas and Louisiana,” Heritage Foundation senior analysts Nick Loris and Katie Tubb, said in a statement.

“Instead, prohibiting the pipeline will create more inefficient and riskier methods of transporting crude, whether that is more tankers from overseas or carrying Canadian crude by truck or rail. At a time when economic growth and job creation are desperately needed, is the administration going to dismiss so many thousands of well-paying, shovel-ready construction jobs?”

Environmental groups saw the move as the first among many on their wish list.

“These huge first steps show Biden is serious about climate action, but re-entering the Paris Agreement and canceling Keystone must be the start of a furious race to avert catastrophe,” Kierán Suckling, executive director of the Center for Biological Diversity, said in a statement. “Much more is needed, and we’re increasingly hopeful the administration will stop approving new fossil fuel projects and speed the transition to clean, distributed energy that climate science and justice demand.”

Interested in more news from Texas? We've got you covered! See More Texas News
Previous Article State Legislatures And Election Processes Are Crucial For The GOP This Year
Next Article Gov. Abbott pledges to address homeless problem this legislative session