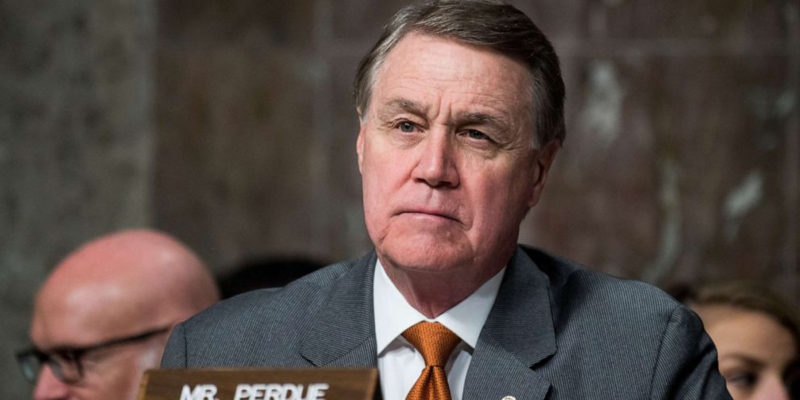 So how does David Perdue, an incumbent Senator who came within a few votes of avoiding a runoff against Jon Ossoff in November – most of the difference being the presence of a Libertarian candidate in the race who picked up 2.3 percent of the vote – end up losing by 16,000 votes?

One would expect the Libertarian voters to go for Perdue rather than Ossoff. It’s quite peculiar. That Perdue is now perdu is a head-scratcher for the ages.

The obvious answer, particularly given the nauseatingly familiar pattern of vote-counting that played out in Georgia last night, when magically the Democrat stronghold of DeKalb County managed to count just enough votes in the middle of the night to put China-compromised soy-boy Ossoff and the implausible black racist Raphael Warnock ahead of Perdue and Kelly Loeffler and give the Democrats their functional Senate majority in a Biden administration, is that the race was stolen.

But that isn’t the only answer.

The NeverTrumper Republican pundit Erick Erickson, who makes his home in Georgia, blames the president. Erickson says that Trump actually suppressed Republican votes in Georgia by continuing to complain about the stolen November election.

The black vote crushed it. Black pastors and Stacey Abrams deserve some credit here. But the reality is the GOP did not perform. To the extent the election was stolen, the GOP stole it from itself. To the extent there was malfeasance, the President running ads on Atlanta radio this very week that the election was stolen is the malfeasance, not local boards of elections. To the extent there is misfeasance, the state GOP chair in Georgia attacking the Republican Secretary of State and lying about what happened in November is the misfeasance, not local boards of elections.

And, by the way, I would note that for those trying to rewrite history, Brian Kemp actually made a good pick with Kelly Loeffler, who would have won had the GOP not sabotaged itself.

The state’s Republican Party should resign en masse. They spent so much time re-litigating November and picking fights with their own Georgia Republicans that they did not do too much for December. Yes, the party failed. Look for David Shafer, the state party chair, to run for statewide office claiming to be a Trump defender. I just cannot see him credibly staying as party chair being the first Republican Party chair in the state since the early 2000s to see the party devastated.

The President ran ads over the past week telling Republicans that the Georgia election was stolen. He came in the night before the election and spent most of his time attacking the GOP. He too helped suppress the vote. His voters did not vote. Yes, the President deserves some blame here.

The Georgia congressional delegation also told everyone Georgia and its Republican Secretary of State were collaborating with Democrats to steal the vote. So Trump voters did not show up. They took the my way or the highway approach. The area of state that saw the GOP mostly like to stay home is the area of the state with the QAnon Congresswoman who has vocally complained the election was stolen and everything is rigged.

It really was amazing.

As polls closed and votes started pouring in, I started getting messages from Republicans across Georgia. “The numbers are not where the models are,” was a common refrain.

The GOP estimated a Republican turnout that did not show up. Again, and this is crucially important, the Republican voters did not show up while Democrats did. The area of North Georgia where Donald Trump went on Monday night turned out at a lower rate than the rest of the state. That area also has a QAnon Congresswoman now who very vocally has been claiming the Democrats were stealing the election.

Had the Republicans showed up at their expected levels, they could have at least held David Perdue’s seat. As an aside, I was wrong about black farmers in South Georgia. They voted Perdue over Ossoff in the general, but a lot of them voted straight Democrat this time.

Black pastors mobilized for Warnock over Loeffler, but again, had Republicans showed up both Perdue and Loeffler would have won.

Here’s the bottom line and there’s no reason to belabor this: The Republican Party is going to have to find a way for a Trump and non-Trump right-of-center coalition to survive. In Georgia, the soccer mom that hated Trump turned out in the suburbs. We know this because upper income white women in the suburbs voted Perdue and Loeffler. But in county after county, Perdue and Loeffler failed to match the turnout of having Trump on the ballot.

If Republicans cannot find a way to coexist as a party, they’ll cede ground to Democrats at the very moment the Democratic Party is on the verge of its own crack up because rich, secular whites and socially conservative minority voters don’t gel— see e.g. Latinx.

Republicans in Georgia are like the Atlanta Falcons. They throw away their leads and they did it spectacularly in Georgia last night.

Erickson is often wrong, particularly about Trump. In this case he’s probably right. That the Democrats stole the election in Georgia from Trump doesn’t change the fact that the country needed Perdue and/or Loeffler to win last night, and dwelling on the stolen election in a state where suburban wine moms who don’t really like Trump are crucial doesn’t do anything to help. Trump coming to Georgia and talking about himself rather than Perdue and Loeffler was not what they needed. If anything, complaining about a stolen election dispirits Republican voters who don’t believe the system is honest anymore; why bother voting?

On the other hand, six years ago David Perdue easily won election in Georgia with 1.3 million votes. Last night he lost with more than 2.1 million votes.

But Georgia is a red state. Even after last night, the fundamentals of Georgia still hold for the GOP. Go and look at the legislature and the congressional delegation. It’s red. Atlanta is bright blue, but the rest of the state is red. Georgia was still very winnable for David Perdue, and yet he didn’t win.

Why do we bring that up? Well, here’s a familiar name. From POLITICO on Dec. 2…

TRANSITIONS — Sen. David Perdue’s (R-Ga.) runoff campaign has added Austin Chambers as senior strategist and Dave Abrams as senior comms adviser. Chambers previously was president of the Republican State Leadership Committee, and Abrams previously was deputy executive director at the RSLC. … Zac Rutherford will be COS for Rep.-elect Diana Harshbarger (R-Tenn.). He previously was her campaign manager. …

If you followed Rispone’s failed race against John Bel Edwards, you probably remember that Chambers parachuted into that race as well, and with the same strategy – try to make your candidate a mini-Trump and talk right past the voters in the state.

It’s fair to say that didn’t work. If Erickson is correct and it was hard-core Trump voters who listened to Lin Wood and stayed home, then maybe blaming Trump is valid. But Trump wasn’t on the ballot last night. David Perdue was. It’s David Perdue’s campaign’s responsibility to get the vote out in a red state, and Chambers was the senior strategist.

Just like in 2019 in Louisiana, he lost a race that frankly shouldn’t have been lost no matter what kind of shenanigans and hijinks the Democrats managed to pull. Once again Chambers offered no message for his own client other than Trump, Trump, Trump. And once again, that failed.

Blame the president if you want, but if you really want to understand what went wrong in a race that shouldn’t have been lost, take a look at who was in charge of the Perdue side of last night’s debacle.