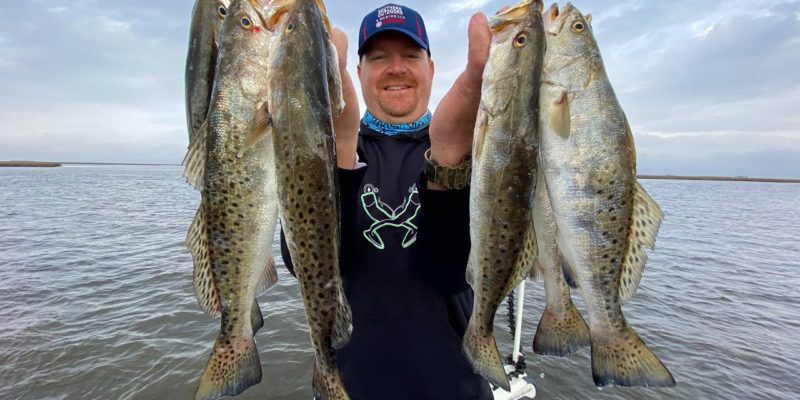 After ushering through a few Arctic blasts, the South Louisiana winter has decided it actually wants to be spring, and that’s done some magical things to the region’s speckled trout population.

Specks there have all but abandoned their wintering areas and are moving to the big lakes. It’s in that in between area that Miller and I intercepted them this week.

Miller has been watching the evolution occur for several days as catches have declined in areas that are normally productive in January. The good news is the middle ground has more than made up the difference as specks have responded to the warmer temperatures by biting feverishly and fighting like they’re furious about having been fooled.

Though we battled a 15-mph wind out of the southwest, we had no trouble finding feeding fish, beginning the day in an area Miller had fished 48 hours prior but abandoning it to find bigger speckled trout.

That effort was quite successful.

Hot baits for the day included an H&H TKO Shrimp fished under a Versamaxx Pro-Series Bolt popping cork as well as a shrimp creole Matrix Shad fished under an oval cork.

The water was clean, with about 18 inches of visibility, and the tide was falling. We spent the night on the shores of the bayou at Reel Inn Dularge (www.reelinndularge.com).

Like the video? Please give it a thumbs up, and subscribe to the Marsh Man Masson channel on YouTube. Also, leave a comment below or on the YouTube page. Have you seen an uptick in speckled trout action with the milder temperatures?

Interested in more news from Louisiana? We've got you covered! See More Louisiana News
Previous Article SADOW: Caddo Commission Sliding Towards Dysfunction
Next Article Monroe’s concentrated poverty rate is the highest in all of Louisiana