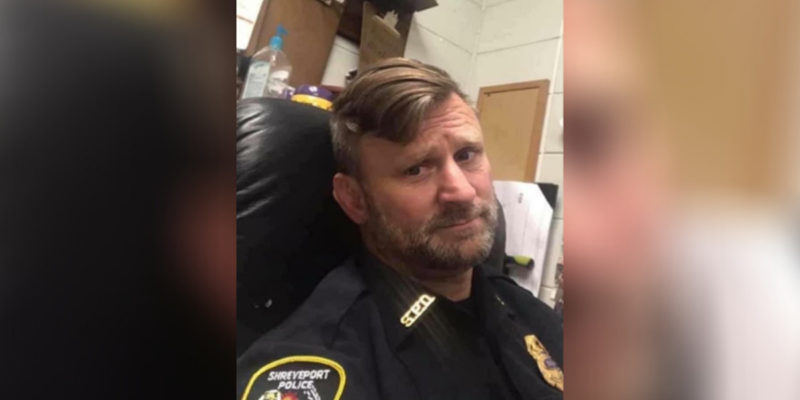 Days after the death of George Floyd in Minneapolis last year, which occurred incident to his arrest that included an office placing him in a chokehold for several minutes, Shreveport Police Department then-Sgt. Brent Mason made a social media post about it. Although not a lawyer, Mason argued that the officers involved shouldn’t face a murder charge. Mason, a department trainer who has a training business on the side and has been featured in the media for it, opined that the hold alone didn’t cause Floyd’s death, but likely contributed to it, concluding that the “poor technique … normally does not result death” but might if Floyd “had health conditions and toxins in his blood.”

Which, weeks later, was confirmed. The coroner’s report on Floyd showed recent methamphetamine consumption and fentanyl intoxication – video of the event showed Floyd ingesting a substance consistent with that the moment of his restraint, similar to his actions in an arrest a year earlier – which the coroner said, although classifying death as heart failure due to choking, by itself could have produced a fatal overdose.

The judicial system later agreed with Mason, by dropping a murder charge against the officer who sustained the chokehold on Floyd, although he still faces two charges of unintentionally killing Floyd, and the other three officers still charged in aiding in that. But by then, Mason already had faced discipline.

Shortly after the post in late May, Police Chief Ben Raymond asked Mason to delete the post, which he did. Department policy states that employees should exercise “good judgment and demonstrate personal accountability when choosing to participate on social networking sites and other online forums.” As it turned out, subsequent events proved Mason made a quite reasonable judgment of the incident. About the only thing controversial about it was at the post’s end Mason questioned whether the legal and personnel actions taken against the officers presumed guilt before innocence.

Yet, perhaps urged by calls to resign over the matter, Raymond eventually suspended Mason for 90 days, a decision and Mason’s eventual appeal of it to the city’s Municipal Fire and Police Civil Service Board that remain confidential. Interestingly, during the process in October Mason received a promotion to sergeant, which Raymond said civil service rules dictated. On Dec. 9 of last year, the Board rejected his Nov. 11 appeal (the debate is not publicly posted).

One critic at the time of the promotion, a self-styled activist named Breka Peoples, who doesn’t even live in Shreveport but in DeSoto Parish, lambasted that decision and Mason. She had bigger issues to face as it turned out; days later, she was arrested for violating electioneering laws in DeSoto.

This gave Mason a chance for what he thought was the last laugh. Finding her social media littered with accusations of racism towards the SPD, he posted his view that she hated the SPD, whites, and free speech. Nothing came of that until the end of the year, when Raymond received a complaint about that. Deciding that Mason needed disciplining again, Raymond had to fire him according to rules with him already having faced suspension for the maximum 90 days in a year.

Fortunately, Mason didn’t buckle. He now has sued to overturn the Dec. 9 decision, with a reversal of that meaning he would receive his job back although be in line for discipline up to a 90-day suspension (with that perhaps already accounted for by the previous one).

Appropriately so, because he is in the right. Nothing he said in the original post was disrespectful or showed any bias towards anybody; he simply stated, according to his longtime experience, given what he knew about it, what likely was a contributing element to Floyd’s death. That he also provided a legal opinion on the fate of the arresting officers and the state criminal justice in Minnesota has no bearing on his ability to perform as a public servant in Shreveport.

Jurisprudence is such that while a public employer may not muzzle its employees or penalize them for their expressions and associations to the same extent that a private employer can, the public employer nonetheless does have broad leeway in restricting employee speech, subject to a balancing test whether the speech is of a “public concern” (which demands a higher burden of proof). While Mason’s second post might violate such standards, it’s a real stretch to say that the first one did.

Let’s hope he wins, for the sake of government employees’ free expression rights and a broader public interest. As Democrats come to power at least for the next couple of years in Washington, the political left will become bolder in trying to halt speech critical to its policy preferences, because it can’t intellectually defend these and so must try to shoot the messengers which chills free expression. Those who value openness and honesty in political debates, much less who support a basic Constitutional liberty, will have to fight harder to forestall the gathering forces of oppression that seek to abnegate these.

Interested in more news from Louisiana? We've got you covered! See More Louisiana News
Previous Article Can We Talk About What A Shameless Joke Ted James Is?
Next Article BATISTE: LaToya “The DeStroya” Cantrell Absurdly Honored On Performance