UPDATE: Two items of major note and a couple of other things.

First, we talked to Roger Villere this afternoon and he said that while he’d had discussions with Sancha Smith about working the 5th District race for her, he hadn’t made any agreement to do so as of now – so something which had a decent bit of traction in Republican circles can have its brakes tapped at this point.

And second, Claston Bernard is now in the 2nd District race. He qualified this afternoon. He’s the right guy for the GOP to run in that district, and in the right circumstances he could be the guy who can steal it – especially if this is more than just a one-off. We’ll describe how, in detail, in a future post.

Finally, it looks like the ranks of contestants in these two races have swelled to 19 – 12 in the 2nd District and seven in the 5th… 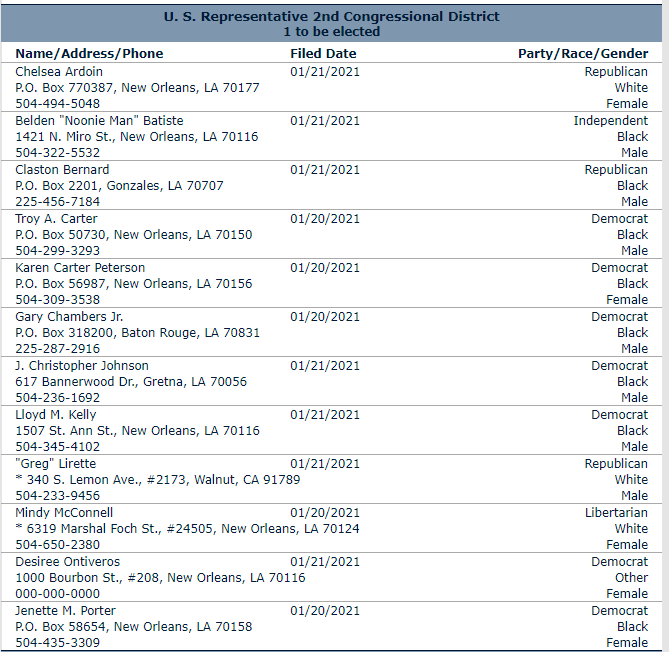 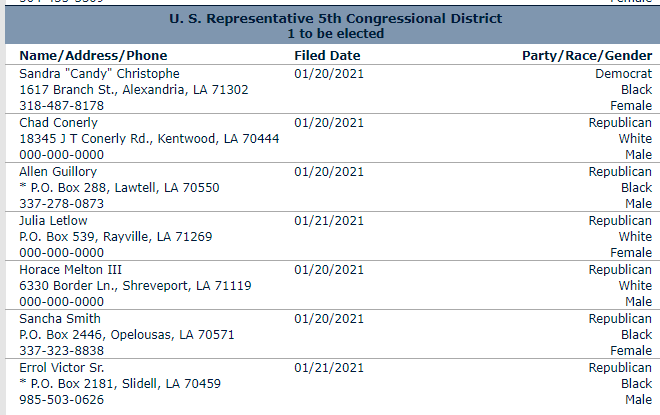 ORIGINAL: It appears, based on yesterday’s filings, that we’re going to have a rather robust pair of special election races for the two open U.S. House seats from Louisiana. There were eleven candidates who qualified for the 2nd and 5th District seats: five in the 2nd District, and six in the 5th District.

In the 2nd District race, which came into being when Rep. Cedric Richmond resigned to take a job in the Biden administration, there were three candidates everyone expected to see running and two others nobody knew much about. As of now, the likely battle for the seat will be between New Orleans state senators Karen Carter Peterson and Troy Carter, both black Democrats. Left-wing activist and race hustler Gary Chambers, a Democrat from Baton Rouge, is also in the race; Chambers’ candidacy was known and expected.

Two others qualified yesterday. Mindy McConnell, so far the only white candidate in the race, entered as the Libertarian Party nominee, while Jenette Porter, a black Democrat, also jumped in.

Today or tomorrow there could be a notable addition or two in the 2nd District race. Lambert Boissiere, the Public Service Commissioner from the New Orleans/River Parishes district, has been talking about entering the 2nd District race and might make the jump. He’s not up for re-election on the PSC until 2022, so it’s a free shot for him and if he were to get in he might upset the balance of the race by stealing a sizable chunk of Troy Carter’s more moderate vote.

And one Republican expected to make the race could make things very interesting.

Claston Bernard’s name might be familiar to folks who don’t know him as a conservative author or as a former Olympian and LSU All-American track athlete. He’s a Jamaican immigrant, a member of the Republicans State Central Committee and a highly articulate advocate for conservative ideals; nobody like Bernard has run in the 2nd District before.

There are a couple of other Republican candidates whose names are being thrown around as possibilities, but neither have the upside of Bernard. What he lacks, and needs to fix immediately, is a decent-sized campaign war chest. Here’s the link to donate.

The best possible circumstances for a miracle GOP win in the 2nd District race would be for Bernard, and only Bernard, to jump into the race on the Republican side and then for Boissiere to get in on the Democrat side. Bernard would then have an open lane into the runoff where he might well draw Peterson, whose combative and loony antics might just alienate enough voters to make the runoff competitive. It’s thought that Troy Carter is the favorite, given that Richmond is backing him, but Boissiere could muddle things for Carter.

Of course, next to Chambers Peterson is the worst possible 2nd District winner. But there wouldn’t be much difference in voting record among any of the Democrats. And Karen Carter Peterson as the sole Democrat House member would be absolutely terrible for the electability of that party’s candidates in future races, especially if she only narrowly won against Bernard (and the GOP made an effort to begin the 2022 race as soon as this year’s was over, with Bernard campaigning nonstop and making the argument against a leftist loon representing the district in a coming GOP majority House).

In the 5th District, there are six candidates in the field already. The favorite in the race is Julia Letlow, the wife of the late Luke Letlow, who won in December with 62 percent of the vote. Julia Letlow appears to have the support of outgoing congressman Ralph Abraham and it was Luke’s dying wish that his wife succeed him. That’s a tough combination to beat, which is why none of the candidates who qualified yesterday look like they’ve got any chance to win. Candi Christophe, who ran for the seat last year and came in third place with 16 percent of the vote, just 400 votes behind Lance Harris, is making a reprise; if there’s a runoff, which isn’t likely, Christophe is likely to be in it.

But there are four others in the race, all of whom are Republicans. Chad Conerly of Kentwood and Horace Melton of Shreveport are white guys, while Allen Guillory of Opelousas, who ran last year and pulled seven percent of the vote, and Sancha Smith of Opelousas, whose campaign is apparently going to be run by former LAGOP chairman Roger Villere, are black. We don’t know of any other notable candidates who intend on making the race.