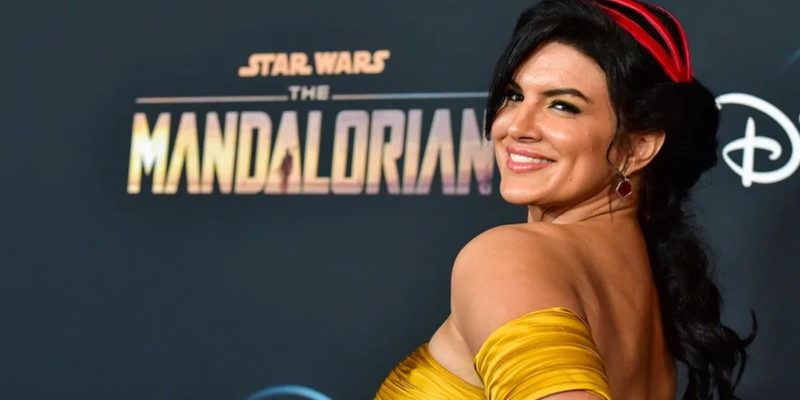 This one is probably going to hurt, but if the public responded to Morgan Wallen getting canceled for the sin of getting loaded and calling a white drinking buddy a “p***y a** n****r while out on the town within camera-phone shot of some rando who sold the recording to TMZ by making Wallen the best-selling country music artist in the world in the past week, the Gina Carano mess deserves a response at least as vigorous.

Who’s Gina Carano? She’s an actress. Before that she was a female MMA champion.

All Hollywood wants to do is make movies and TV shows featuring women who beat the absolute hell out of men twice their size with only a small modicum of effort. Most of these films bomb at the box office because audiences find them (1) implausible and (2) not particularly useful. If you’re raising a daughter in the real world it isn’t really a good idea to shower her with images and stories about female physical superiority in combat settings. She almost certainly isn’t getting anywhere in the real world relying on physical intimidation to achieve her goals, and women have far better assets – intuition, emotional intelligence, verbal skills – to get ahead in the world.

But Gina Carano is one of the few women in the film industry who can plausibly pull off the action hero role, which is why she was cast as Cara Dune in Disney’s Star Wars derivative series The Mandalorian. It’s an action role she received good reviews for.

But Carano won’t be playing Cara Dune anymore. Why? Because Gina Carano thinks things which are not in fashion in Hollywood and makes social media posts accordingly.

She’s challenged the COVID-19 orthodoxy about masks – specifically by posting a “Meanwhile in California” meme depicting somebody with multiple masks on.

She’s voiced the opinion, shared by most Americans, that Jeffrey Epstein didn’t kill himself.

She posted this: “Expecting everyone you encounter to agree with every belief or view you hold is f—ing wild.”

She’s also not on board with the transgender fad. She objects to the bizarre pronoun demands being made by the gender-dysphoric.

And she’s also not that confident in the integrity of the 2020 presidential election.

And then Carano committed a completely egregious sin. What was that? Well, here…

Got that? She’s warning that people in power willing to Otherize entire segments of the population and make vigorous efforts to stoke hatred against them are very capable of using that public hatred to commit atrocities against their intended victims.

That’s what the Nazis did to the Jews, and it is most certainly not anti-semitic to recognize it. Particularly when while the Holocaust is the historical example which stands out most commonly in our culture it’s anything but the only one.

There’s what the Turks did to the Armenians, which was very, very similar to the Holocaust.

There was the Soviet Holodomor in Ukraine.

There was the Soviet liquidation of the kulaks.

There was Mao Zedong’s Cultural Revolution, when the Other were educated intellectuals and white-collar workers.

There is what China is currently doing to the Uighurs. And what China did to Tibet.

There was what happened in Rwanda.

There was what Pol Pot did to the urban population of Cambodia.

We could go on.

Stupid people on the internet, like this profound imbecile, utterly and completely whiffed in their understanding of Carano’s point and boiled it down to her claiming that today’s Republicans are yesterday’s German Jews.

No, moron. But the threat of what progresses from runaway intolerance and demagogic, abusive governments run by psychopaths makes that comparison really not all that zany. After all, Anita Dunn is one of the most influential figures in the Democrat Party these days and Dunn openly touted Mao’s philosophy of power emanating from the barrel of a gun; Dunn is anything but the only Maoist in that party’s inner circle. Democrat political figures regularly tout political violence and encouraged it last year when mobs burned and looted vast swaths of American cities. The rhetoric and even opening steps in using the levers of government and corporate power to suppress opposition to their political and cultural agenda smells a good bit like the opening stages of the kinds of pogroms history is replete with.

And once the Twitter outrage mob cranked up stupid #FireGinaCarano hashtags, that’s exactly what Lucasfilm, the production company in charge of the Mandalorian series, did.

Gina Carano, who portrayed Cara Dune on Disney+’s “The Mandalorian,” was fired from Lucasfilm on Wednesday evening due to the actress’ controversial social media posts.

“Gina Carano is not currently employed by Lucasfilm and there are no plans for her to be in the future,” a Lucasfilm spokesperson told IndieWire in a statement. “Nevertheless, her social media posts denigrating people based on their cultural and religious identities are abhorrent and unacceptable.”

Got that? You’re “denigrating” Jewish people for explaining that psychopathically abusive governments like the Nazis might, if given the opportunity, repeat the kinds of atrocities they suffered at Hitler’s hands.

This is what passes for intelligent management at Lucasfilm, which is owned by Disney.

Lucasfilm, by the way, has murdered the Star Wars franchise with a string of horribly-told films with social-justice themes where compelling plot lines should have been. The Mandalorian was supposed to signify something along the lines of redemption for past sins against storytelling, but it’s clear that stupid politics wins out at that company as it does throughout Disney’s properties.

The public’s reaction to the obnoxiously-disproportionate destruction of Wallen’s career was a shining cultural moment not dissimilar to the Reddit revolution and GameStop short squeeze. A repeat of that in-your-face public rebuke of our would-be elites is more than warranted in Carano’s case; it’s critical.

Disney needs to pay through the nose for the canceling of Gina Carano. She’s done nothing wrong. By attempting to destroy her career they have absolutely made her point for her.

Let’s get to work canceling Disney. Don’t go to the theme parks, don’t pay for Disney Plus, don’t watch their channels, don’t buy the merchandise and don’t rent the movies. If half of America – if really ought to be a lot more than half, frankly – doesn’t now declare war on that company and destroy its brand over the canceling of Gina Carano, then we’re only paying lip service to the First Amendment and we don’t actually believe in it.

Disney has cancelled @ginacarano, so I’m cancelling my @disneyplus. We need to stop giving these people our money and we must build new franchises.

Gina, if you’d like to come on the show to discuss anything let me know. pic.twitter.com/c2SSAjjdyu