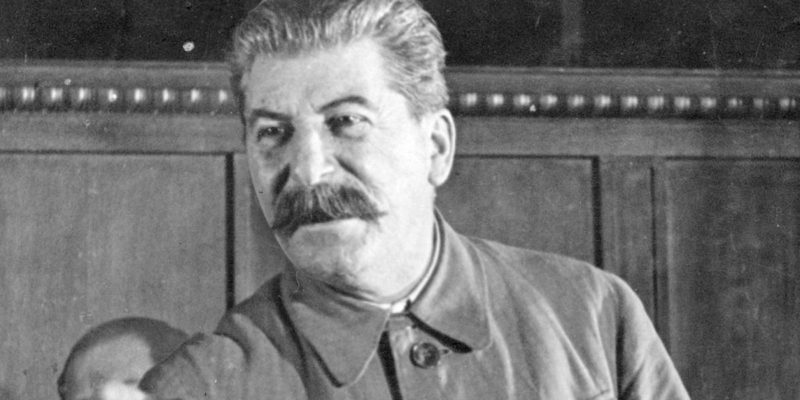 During the early 1930s, Soviet dictator Joseph Stalin was consolidating his power in the Communist Party and purging anyone that criticized him. He called them “enemies of the people” (that sounds familiar), and arrested them. During the peak of these purges, over 7 million Soviet citizens were arrested and millions more died in prison camps (or gulags).

And although the Soviet Constitution of 1936 still provided the right of due process for the accused, Stalin “simplified” the judicial system by removing the right of defense, speeding up any trials, and expanding the death penalty to cover hundreds of new offenses.

Although few ever saw the inside of a Soviet courtroom, Stalin conducted three scripted “show trials” of his political adversaries during this time to “show” the world that the accused Communist Party leaders and government officials he had arrested were being treated fairly.

Not surprisingly, all the defendants in these “show trials” were found guilty on all the charges and subsequently shot.

While most Americans find the very notion of these “show trials” as abhorrent to our sense of justice, this Soviet-era practice was on full display during the impeachment trial of former President Trump this month – with all the accoutrements of the federal government’s full weight, strength, and power. And 57 U.S. Senators went along.

In an interview with Chuck Todd on NBC’s Meet the Press after the House shoveled the Trump impeachment forward, Louisiana Sen. Bill Cassidy said “there was no process” and “it’s almost like if it happened in the Soviet Union you would have called it a show trial.” Then Cassidy added, “The President wasn’t there, he wasn’t allowed counsel, they didn’t amass evidence, in five hours they kind of judged and boom he’s impeached.”

He also said he knew that under the Nixon and Clinton impeachments there were “truckloads of information” and that there had been virtually none of that here, in Trump’s impeachment last month.

Cassidy went as far to say, “Process is important when it comes to justice.”

And yet, after professing all of this, and knowing the atrocities that followed the very scripted “show trials” in Joseph Stalin’s Soviet Union, Cassidy voted to convict Trump, anyway.

It makes no sense – well, no logical sense, at least. And if Cassidy genuinely believed that the “process” is important to achieving justice, how could he vote to convict, when he (himself) says there wasn’t any process, at all?

Aside from the constitutional questions of a trial to remove a president from office who is no longer in office (even the Chief Justice of the Supreme Court, who is appointed by the Constitution to preside over an impeachment trial, refused to preside) many feel Cassidy dismissed the interests of his own constituents by voting to convict. Remember, Louisiana Republicans delivered Cassidy to the U.S Senate in 2014 with 56% of the vote, beating back Mary Landrieu, and marking the first Republican victory for the seat since 1883.

But it wasn’t just Republicans who elected Cassidy in 2014 with 56% of the vote, or re-elected him in 2020 with 59% of the vote. Considering registered Republicans only make-up 32% of Louisiana voters, there are nearly as many “Democrats” and “No Party” voters in Louisiana who not only voted for Cassidy, but voted for Trump last year, as well.

Does this matter to Cassidy? He would say “yes.” But is it important to him that his votes in the Senate represent how his constituents would vote on any particular issue? On this issue of impeachment, clearly that was not important to him. But some would argue, it isn’t supposed to work that way, anyway.

Statesman Edmund Burke said the only thing an elected official owes his constituents is his or her own best judgment. From a recent Rasmussen poll, however, nearly 50% of Americans want more than that. They think members of Congress should vote as their constituents would want them to vote.

This is why so many Louisiana voters, many of whom crossed party lines to elect Cassidy in 2014 and 2020, have roundly chastised him and condemned his vote to convict Trump.

They shouldn’t be shamed or silenced for having a difference of opinion – they aren’t “misguided.” They are no different than the 80 percent of Americans across the country who believe their elected officials no longer listen to them when deciding how to vote on legislation.

Some say they are tired of not being heard, and Cassidy’s act of defiance on impeachment is the last straw. They are considering giving up, throwing their collective hands into the air and avowing to switch their voter registration to “no party,” seeing both Democrats and Republicans as two heads of the same snake. But doing so will burn down the two-party system in the U.S. and only increase the divide between elected officials and constituents.

The progressive agenda will become easier to advance in a dominant, one-party system and moderates in both parties will become the “enemies of the state.” The one-party that remains will then be free to consolidate their power through whatever means possible, just as Joseph Stalin attempted in the 1930s.

While Senator Cassidy has shown great disrespect to his constituents in Louisiana, across party lines, this is no time for any of us to choose ambivalence, or for our elected representatives to participate in more “show trials.”

There’s just too much at stake.