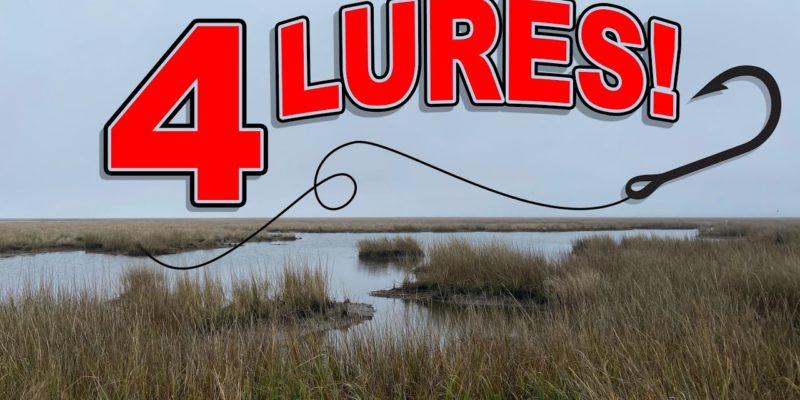 This time of year, when air temperatures can range between the mid-teens we had this week to something more resembling summer, finding areas that are most likely to hold fish can be as simple as peeking at your water-temperature gauge.

Fish in the marsh — just like those in inland lakes — move to find the most habitable water as conditions change.

But just because you’ve located an area that should hold fish doesn’t mean you’ll be able to catch them. Finding feeding fish may be 90 percent of the battle, but if what you’re throwing doesn’t look positively yummy to them, you might as well be kicked back in your recliner watching YouTube videos. You’ll catch just as many.

In recent years, I’ve identified four lures that will ALWAYS be tied to the end of my rods this time of year, and I’ve learned that if none of these work, it’s because I’m in an area that’s not holding fish. Add these to your arsenal, and I’m confident you’ll see your catch rates go up.

The first is a soft-plastic swimbait rigged on a jighead. Lately for me, that’s been a green hornet Matrix Shad on a 1/8- or 1/4-ounce Deathgrip Jighead. This has been, by far, the hottest bait of the winter as low tides and even lower water temperatures have concentrated fish in deep-water bayous and away from the banks.

Go fishing this time of year, and you’d better have some soft-plastic swimbaits in your box. That doesn’t mean, however, that they’re always the best option, and on my most recent trip, they certainly weren’t.

It was before this massive front, and water levels were up and temperatures were rising. As a result, the fish had moved out of the deep-water cages and crowded the grass-peppered banks, where they could feed.

In such a situation, finding where they’re concentrated requires mobility, covering water and making frequent casts with fast-moving reaction baits. One of my favorites for this situation is a crankbait of some type, and lately the most productive for me has been a Bill Lewis SB-57.

It worked quite well on my most recent trip, but like all crankbaits, its productivity is limited in areas with patchy grass when visibility is limited because you’ll spend half your casts picking the grass off your lure, wasting valuable fishing time.

In those situations, I prefer an H&H gold No. 4 soft-wire spinner as a search bait. Teamed with a 1/4-ounce Deathgrip Jighead and a Matrix Shad, it’s a fish-producer that allows you to cover water quickly and locate feeding fish.

Once you do that, you can dial into them with a weightless Pro’s Choice soft stickbait, which is really one of my favorite ways to fish. Lately, the hot color for me has been clear conscience. Along with crab boil and red fog, it’s a color I designed for sportsmansoutfitters.com, specifically for fishing the marshes.

Interested in more news from Louisiana? We've got you covered! See More Louisiana News
Previous Article AVALLONE: Senator Cassidy And The Show-Trial Impeachment
Next Article Guess We’ve All Got To Take A Ride In Quin Hillyer’s Busted Time Machine Again