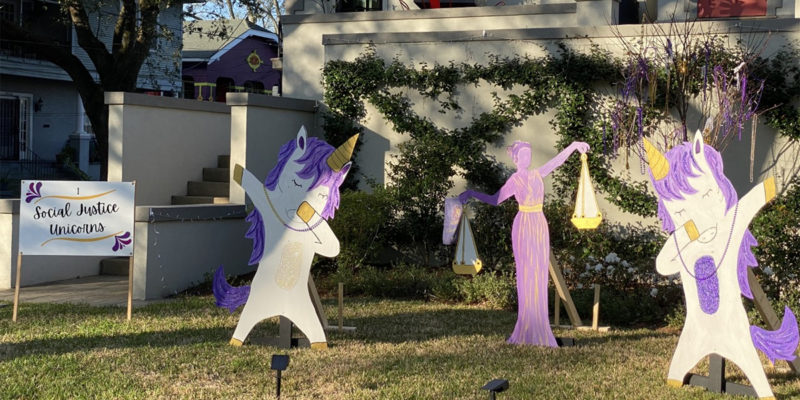 Driving along St. Charles Avenue Uptown, it’s hard to miss the excessive carnival decorations on about a half-dozen homes organized as “The Krewe of House Floats.” This is a reversal of traditional Mardi Gras–instead of parade floats passing by homes and street-lined crowds, now people go to houses to see floats.

Remember when Anne Rice went on the offensive about Al Copeland’s new St. Charles Avenue restaurant? The novelist placed an ad in The Times Picayune in February 1997 apologizing to tourists for Copeland’s restaurant Straya. Rice called the restaurant, “absolutely horrendous,” a “monstrosity,” “one ludicrous and egregious structure,” “nothing short of an abomination,” and “eyesore” in her full page ad. Rice & Copeland went back and forth for months to the enjoyment of many Orleanians.

In fairness, Straya did look like a Mardi Gras float. Now, owners along residential portions of St. Charles excitedly make their homes gawdy, tacky Mardi Gras floats like Straya. Too bad no one has the sense of humor yet to decorate their house as Straya. If only Anne Rice did it, the theme would travel full circle. That would be satire, that would be in the spirit of carnival.

The Krewe of House Floats effort was organized to support businesses impacted by New Orleans mayor LaToya Cantrell’s cancellation of the 2021 Mardi Gras parade season. Residents are decorating their homes in a more elaborate carnival fashion. These exhibits tend to have more flair than the typical flags or door hanger. Houses have themes and a considerable amount of thought, time, and money went in to give the public something to enjoy. The concept is something that sounds positive and supportive during a difficult time of government forced business losses and crushing community morale. And upon closer inspection, the reality seems to alters expectations.

The 2021 House Float displays have created an unsettling feeling with some New Orleanians. Many citizens quietly admit to disliking the House Floats, while at the same time feeling guilty for having these thoughts and for not embracing this new Mardi Gras style.

Don’t feel like Ebenezer Scrooge, it’s a normal reaction. LaToya “the DeStroya” Cantrell canceled parades for 2021, meaning she conjured up the title from the 1990s of The Grinch Who Stole Mardi Gras and gets to add it to her legacy.

On the surface, the Krewe of House Floats seem reassuring that homeowners are trying to maintain a carnival spirit despite the government forced pandemic restrictions. So it feels odd to be irritated by something as fun as large scale Mardi Gras yard art. This isn’t just the malcontent columnist version of Ignatius Reilly searching for something to complain about. The House Float disdain exists in the back of the mind, even if it seems trite and superficial.

In search of the cause of resentment toward House Floats, these are conclusions reached following numerous conversations and a tour. Many feel the large houses made to represent House Floats have an agenda. At its most basic, the government-forced cancellation of Mardi Gras parades leaves plenty New Orleanians with a bitter taste in their mouths. Add to the bitterness that some of these House Floats actually support the cancellation. In fact, among the display at the Fayard house hangs a banner that states, “Thank You Mayor for KEEPING US SAFE.” See, the House Float is not just a way to have Mardi Gras when it has cancelled, the House Floats are mostly liberals and they can use their houses as an attraction while simultaneously sending political messages to the lowly common folks.

The Fayard message should include “from Covid-19” because one glance at the news and it is clear the mayor is not keeping anyone safe from crime. The question to consider is whether LaToya “the DeStroya” Cantrell is keeping New Orleanians safe from a minor pandemic, or is she slowly strangling the city with a pair of oversized beads? The official city Twitter page tweeted the BBC’s story on the Krewe of House Floats with the message “We turned our frown upside down.” Cantrell retweeted it, either ignorant to the fact she put the frown on the city in the first place, or trying to spin it so people blame Covid instead of the actual person who canceled it.

The Krewe of House Floats includes hundreds into the thousands of homes all around the greater New Orleans area. Some of the more popular House Floats are hosted by wealthy elites on St. Charles Avenue. They support the shutdown, they support limiting business operations, and bar and restaurant capacity limitations. And it’s OK, because look, these wealthy people decorated their homes to help you forget that businesses tied to carnival in any way will take a massive financial hit in 2021, except now the float designers decorating homes. The House Floats are a symbolic gesture saying, “It’s OK to cancel the parades, we will save the day, we will do something to entertain the masses.”

The Krewe divides the region into sub-krewes. For instance, one House Float in the 3700 block of Napoleon has the title: “Social Justice Unicorns.” On the website it describes their float: “The Krewe of Themis promotes and fosters social justice in the New Orleans Metropolitan area communities and beyond. We are a group of diverse women, uniting to cultivate positivity and inclusion in our community throughout the year. We believe that feminism is strongest when women of all races and sexual orientations work together for the greater good.”

The resentment of the House Floats also exists because they are subtly attempting to co-opt carnival. It’s something the monied liberals can do and pay for without having to be part of the club-tie crowd, which they are not. The traditional krewes parade through their own financing. They pay for permits, the throws, the floats, designers, tractors, police, bands, and band leaders. New Orleans’ largest event is hosted by masked people spending their own money to put on Mardi Gras for the public’s enjoyment. The House Floats follow a similar pattern, but it’s different and the 2021 shift may impact future carnival celebrations.

Beware that the cancellation of the 2021 carnival season parades (and balls) may impact future celebrations. The Lefties that control the culture-push from the bottom don’t like the hierarchical nature of parading. Eventually even the open super krewes now sniff of haves and have-nots.

The Left knows how to use intimidation of association and even physical intimidation. They call people they don’t like racist, old stuff they don’t like is systemic racism, and they redefine the meaning of symbols, landmarks, street signs, and anything else that can help them to build public opinion against who they deem as enemies, simply because the “enemy” does not bend the knee. The stage has been set by House Floats in 2021 to create an alternative to traditional parading. The Left could make float riding so unpopular through pressure, or even fears of safety, morphing Mardi Gras so all that will publicly exist would be House Floats and the street festival type parades. Meaning the Left will steal Mardi Gras from the krewes that invented, popularized, and evolved the New Orleans carnival celebration.

The Lefties are already murmuring about the evil philanthropic culture in which the rich give pennies to nonprofits and get praised for it, instead of really being forced to be taxed hard for equity (note equity not equality/equal opportunity). The liberal Left will eventually even turn on the Rex crowd and make what has evolved into the public figurehead of New Orleans carnival seem toxic down the road. No matter how much Rex donates to the community, they too will learn that you cannot pacify the Left forever. And remember how hard the Left went after Zulu last year attacking the traditional costumes.

Might seem extreme that Leftists would be able to end parading, but it is much more realistic now than ever before. Why have parades when each day could be one big march, as in people join the Friday night parade march or the Saturday double header or the Sunday parade march. Everyone can come on out, wear a costume, and jump in to make it one big second line. They’ll say, “All are welcome and it’s so much better than that elitist parade system!” The people that oppose this will be called Nazi racist xenophobes.

Another move against traditional carnival was the announcement of plans to finally restore the Municipal Auditorium. The former host site of Mardi Gras balls for numerous organizations has been in a state of disrepair since Katrina flooded it in 2005. The city of New Orleans plans to renovate the Municipal Auditorium into new City Hall offices, ignoring 16 years of calls from the public to restore it. The city’s chief administrative officer for infrastructure Ramsey Green said, “We factually know that building cannot come back to what it was pre-Katrina because there’s no demand for that kind of use of that building.” The organizations did not disappear after Katrina, they found other venues for their balls.

The final anti-traditional carnival move comes in the appointment of Donna Glapion to fill the now vacant Council-At-Large seat. Mayor Cantrell tweeted: “Councilmember Glapion has grassroots in City Hall as an administrative aid for at-large council member Dorthey Mae Taylor in the early 90s! She is now the 2nd Black women to hold that position! #CityOfYES #HERstory” The appointment of an apprentice of the original Grinch Whole Stole Mardi Gras is not to be ignored.

The House Floats celebrate the cancellation of Mardi Gras and a shift in who controls the viewing of New Orleans carnival. It’s OK to dislike them.