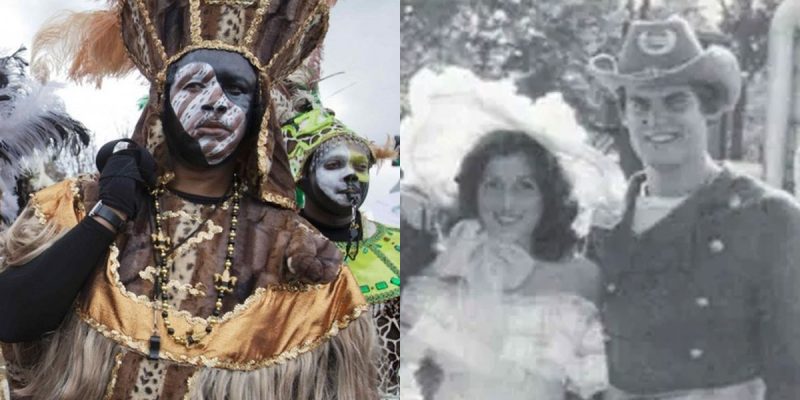 Before we get into the controversy swirling around Tennessee Gov. Bill Lee, who is now a figure of suspicion for having worn an event-appropriate costume to a fraternity event almost 40 years ago, and the further controversy over the makeup worn by members of the Zulu Social Aid & Pleasure Club in New Orleans at their annual parade, let’s talk about somebody else for a minute.

I’m referencing a different Lee – that being Robert E. Lee, who for the past few years has seen his legacy and monuments dedicated to him vandalized by malefactors official and otherwise. Including, of course, in New Orleans – where the traffic circle dedicated to him has been literally unmanned since that city’s former attention-whore mayor Mitch Landrieu used a crane to lop off the statue atop its central pedestal. And in Dallas, where another attention-whore Democrat politician named Mike Rawlings destroyed an equestrian statue of Lee in the name of political correctness.

Yes, Robert E. Lee was a Confederate general – THE Confederate general, to be specific. He was a brilliant military tactician, and had things gone a bit differently Lee might have done for the Confederacy in the Civil War what George Washington did for the United States of America in its revolution. And no, that wouldn’t likely have been a good thing. The Confederacy was not, on balance, the moral equal of the union – we can make all the arguments we like about federalism and the 10th Amendment and tariffs and so forth as the “true” causes of the Civil War, and some of those arguments are not devoid of merit, but at base the South wanted out of the union because the North was attempting to squeeze slavery out of the American economic, social and political picture and the South was not willing to give up the “peculiar institution.”

And Lee chose to lead the Confederate Army rather than that of the Union, the leadership of which was offered to him by then-President Abraham Lincoln. Lee made that choice not because he favored secession or thought the South was on the side of moral right – he made it because Virginia was his home and he could not fight against his friends, neighbors and family. Those who sully the man’s name have been faced with no decision remotely as difficult as the one he did and are in no position to judge him for it, but such is the state of modern culture that we stupidly sit in judgement of our ancestors all the time possessed with none of the context they faced.

But what is most operative today, particularly given the Tennessee governor’s current public-relations difficulties, is what Robert E. Lee did after the Civil War was lost and the Confederacy dissolved. Penniless, stripped of his land (Arlington National Cemetery sits on the Lee family’s former homestead – it was initially intended as an insult to Lee to bury union soldiers on his land) and without prospects for his old age, Lee accepted a position as president of then-Washington College because he wanted to assist in molding a generation of young Southern men to become good American citizens and to help heal the wounds of the Civil War.

It was in this mission Lee was successful, as he generated great acclaim for his efforts at reconciliation – which is why so many statues to him were dedicated in the years following the Civil War, and not just in the South. Lee was also an inspirational figure to many not for what he represented as the Confederacy’s top general, but for the values and virtues he was seen to exemplify – among those being gentility, courage, chivalry and valor – especially to the students at that college, now known as Washington & Lee University.

Four of whom were inspired to start a fraternity, the Kappa Alpha Order, which was dedicated to emulating those values and virtues.

Bill Lee was a KA at Auburn. Your author was one at SMU.

One of the fraternity’s traditions, which political correctness and cultural Marxism have done damage to, is a spring formal event called the Old South Ball. Traditionally members of the fraternity wore Civil War uniforms, most of which being of the Confederate variety owing to the fact KA is a predominantly Southern fraternity, while their dates typically come to the ball decked out in period costumes.

Old South has always been known as one of the best college fraternity parties on campus at practically every college where there is a KA chapter, and even the less-desirable KA’s to the female sex usually had little trouble finding dates because of the unique nature of the party.

And in 1980, Bill Lee wore a Confederate uniform to the Old South Ball at Auburn – just like most of his fraternity brothers did. If the Auburn KA chapter was anything like the KA chapter at SMU of which I was a member, there were probably a smattering of Union uniforms in the crowd as well, as some of our members hailing from Northern states opted for those. Which was absolutely fine, as Old South wasn’t so much a celebration of the Confederacy as it was a celebration of the traditional martial virtues Lee exemplified and the fraternity was founded on.

And yet Lee’s advisors had him apologize for participating in an event and an organization which celebrated those virtues.

“I never intentionally acted in an insensitive way, but with the benefit of hindsight, I can see that participating in that was insensitive and I’ve come to regret it,” Lee said in a statement in response to questions about his involvement in the fraternity’s events.

Pure malpractice, not to mention cowardice, to have buckled under in such a way and to have sold out a tradition he no doubt proudly took part in.

Yes, the national fraternity has banned the wearing of confederate uniforms at Old South Ball, which is of a piece with the full-on retreat Greek organizations across the country have been in over the past two decades. It’s hard to argue that modern higher education, which is a cesspool of cultural tyranny and entitled ignorance, is better off for that retreat, there being no pushback on the rolling cultural aggressions inflicting those institutions.

This week, though, what we’ve seen is that it isn’t just old white men being set upon by the cultural tyrants. In New Orleans it is now “controversial” for members of the Zulu krewe to don black-and-white makeup in lieu of masks at their Mardi Gras parade – a tradition which goes back to the organization’s founding in 1909. Zulu, which is not exclusively black but is nearly so, is one of the very best Mardi Gras krewes, and the Zulu parade is one of the most highly-anticipated of the season.

And yet the same imbeciles who insisted on the destruction of the Lee statue in New Orleans, and the spiritual partners-in-crime of those harassing Bill Lee into his college-costume apology, are now demanding Zulu abandon that tradition. Because “blackface” is racist – even if it’s black guys in blackface.

The leader of the mob of idiots attempting to destroy the Zulu tradition is a familiar name – Malcolm Suber, a literal communist who led the efforts to get rid of the Lee statue atop the Lee Circle pedestal. In what has been perhaps the most encouraging bit of pushback against the Subers of the world and their never-ending attempts at cultural diktat, his protest yesterday against the krewe turned south very quickly…

“We seem to have a group in the city that is stuck in the last century,” Malcolm Suber, one of Take ’Em Down Nola’s organizers, said during a press conference across from Zulu’s North Broad Street clubhouse.

The activity drew the attention of club members who filed outside to face off against those who no longer want them to paint their faces.

“I think they’re intelligent men, and I think they’re gonna heed to our suggestions to take it off,” said one protester who carried a sign that read “Take It Off.”

“I ain’t taking it off,” responded one Zulu member who held face paint in his hand. He and a handful of other members then painted their faces. Minutes later, a brass band rounded the corner at Orleans Avenue, and Zulu members and their friends danced in the street.

The video is utterly delicious…

Congratulations to the Zulu krewe for their willingness to stand and defend their traditions against the cultural Marxist crowd. Here’s hoping that all of us who find value in our history and culture – and the diversity of experiences that culture contains, not to mention the positive lessons we may draw from them – may ally against the Malcolm Subers who would bowdlerize them.

But first we have to learn to stop apologizing. Zulu gets it. It’s a shame Bill Lee and his advisors don’t.