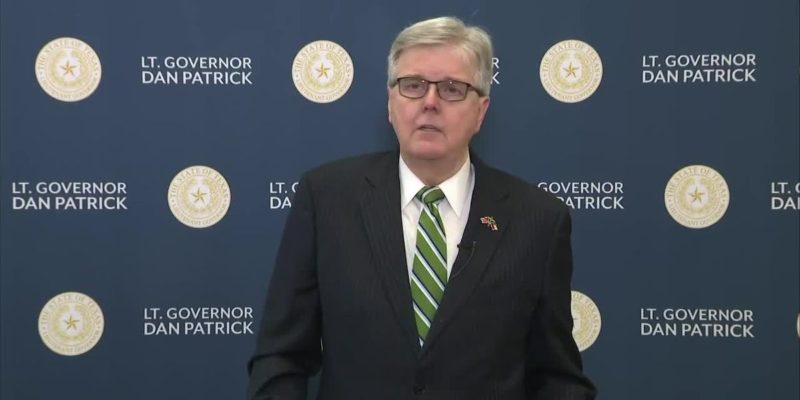 Lt. Gov. Dan Patrick announced his top priorities for the 2021 Legislative Session on Monday, adding some clarity on what the remainder of the 87th Legislature will look like in the upper chamber.

“Since the Texas Legislature adjourned in 2019, Texas has faced some of the greatest challenges in our history,” Patrick said in a press release. “In fact, several of my priority bills changed in the last few days in response to issues that emerged from the winter storm last week. I have also prioritized legislation that reflects the principles and values of the Texas conservative majority. I am confident these priorities address issues that are critical to Texans at this time.”

Speaker Dade Phelan has not yet released his priorities.

There is 19 days left before the bill-filing deadline in the Texas Legislature, and bills have not yet been referred to committees. As is common, lower-number bills and the common priorities between “the Big 3” (Speaker, Lieutenant Governor, and Governor) are likely to pass earlier and with less in the way of opposition.

As far as Patrick’s picks go, he continued, the list is not comprehensive of his support. He continued:

“… There are other bills that also have my strong support including the Medical Compensation Transparency Act (paid or incurred) and additional legislation to stop human trafficking. I also support the legislative proposal to review statewide health data in light of the pandemic and proposed legislation that will speed the recovery of the restaurant industry, including maintaining ‘liquor-to-go.’

“I support the priorities laid out by Governor Greg Abbott as well as other legislation to make sure the Texas economy continues to come back stronger than ever following the pandemic. I will be working to make sure this legislation passes and that we do all that we can to make our state, our cities and all our communities safe and secure going forward.”

Lt. Gov. Patrick’s priority bills are below (listed by number, not necessarily in order of priority).

From the hip: It’s a conservative list for sure, but missing are several legislative priorities passed by Republican delegates over the summer. Election integrity, taxpayer lobbying ban, religious freedom, and school choice made the list, but missing are a ban on gender modification of minors, historic monument protections, and constitutional carry.

The priorities we see are not too different than previous sessions in recent memory, though a new Speaker and shake-ups on several committees adds some new dynamics to the mix. Phelan’s priorities should fine-tune the picture even further.