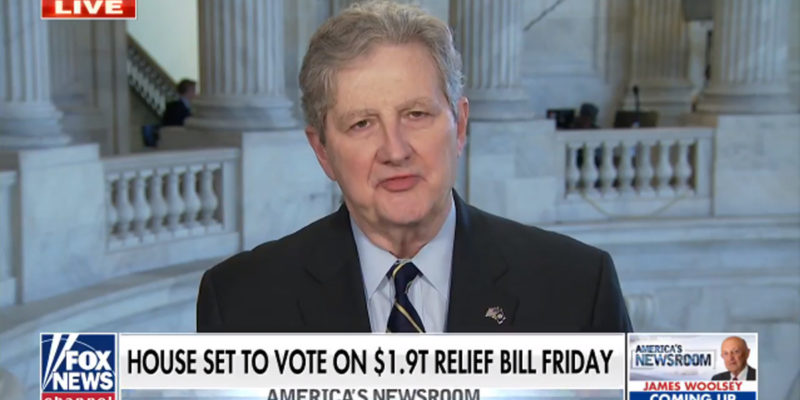 This is vintage John Kennedy, and it comes at a good time – the $1.9 trillion spendapalooza making its way through Capitol Hill purports to provide relief for people suffering under COVID lockdowns, but it’s really nothing but a grab-bag of pork, waste and fraud. It blows away any concept of fiscal responsibility and it obliterates the principle of governmental accountability.

Kennedy says no to that, and while at this point there aren’t enough Republicans to kill it in the Senate the bill is so bad it might be more than a couple of the Democrats can stand. There is buzz on Capitol Hill that it won’t actually pass.

We’re not sure about that, and we swore off most of our optimism about anything the federal government might or might not do when neither David Perdue nor Kelly Loeffler could beat back the Democrat loons running against them in those Georgia runoffs. But sometimes the overreach is so pronounced, and the bad policy so obnoxious, that even the Democrats find themselves running into walls they can’t travel through.

This bill could be it.

“The profligacy is mind-numbing. The motto of the Biden administration seems to be ‘We can’t spend too much.’ Any fair-minded person knows that is a very superficial, desultory, almost infantile approach — either that or the people advising president Biden have an opium habit,” Kennedy stated. “Any fool can spend money. The objective is not to spend money. It is not how much you spend. It’s what you spend it on. Ninety-five percent of President Biden’s bill is not going to even be spent until 2022 and beyond. This isn’t a coronavirus bill. This is a left of Lenin, neosocialist wish list. I mean, it just is. It is chock full of spending porn. They’ve got money for transit projects and bridges and language preservation, billions for people who are in our country illegally. I am all for spending additional monies to combat the coronavirus. But this bill isn’t it.”

He also weighs in on the nomination of Xavier Becerra to run the Department of Health and Human Services, which seems like it might be in as much trouble as Neera Tanden’s Office of Management and Budget nomination. Kennedy says Becerra is totally unqualified for the job and that his nomination might be the worst of Biden’s personnel moves.