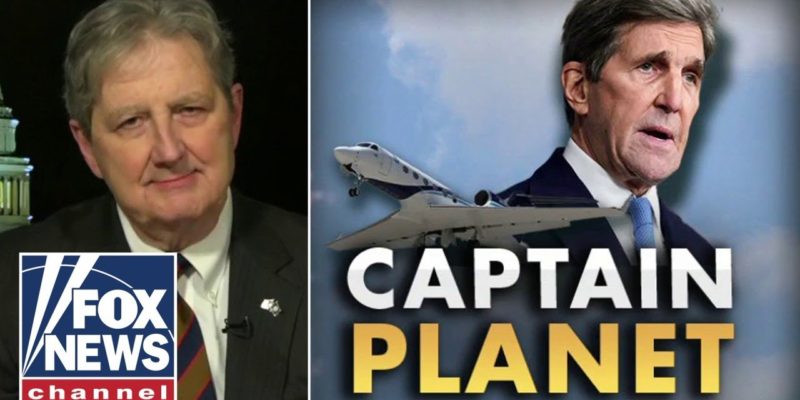 This comes from an appearance Sen. John Kennedy made on Hannity last night, and it’s his reaction to the insufferable jackass John Kerry, who has a make-work job as Joe Biden’s climate czar, and statements he made earlier in the week along the lines that Kerry has no choice but to fly in a private plane while lecturing the world about carbon emissions.

Kennedy rightly blasts Kerry and the rest of what he calls the “tuna tartare” set, or the managerial elite, put in different terms, for the rank hypocrisy so many of them exhibit on a constant basis. We’ll have a bit more commentary on the back side of this…

Also yesterday there was an outstanding piece at Front Page Magazine by Daniel Greenfield which it wouldn’t surprise us a bit if Kennedy had read before he went on TV. Greenfield tackled the subject of that managerial elite and the terrorizing of the American middle class for which they’re responsible…

The new economy was heavily administrative. It would cheerfully offshore manufacturing and engineering jobs, but not the diversity specialists and managers serving as political commissars. White male jobs that depended on skill and reliability became endangered, while jobs in which fitting in at an office was more important than traditional work skills became more reliable bets.

Critical race theory became the damoclean sword hanging over the heads of the suburban middle class. Like Orwell’s 1984, the members of this ‘middle party’ were bludgeoned with a campaign of political terror so that they wouldn’t have time to think about the system they were administering. The political enunchization of the administrative middle class had the same function in Orwell’s fictional dystopia and in the entirely real dystopias across the country.

The new elites are unconcerned with the proles laboring over the actual product, but deeply worry about the political reliability of the administrative class that is their means of control. They don’t care what the workers believe because they earn too little and there’s little leverage over them, but they are obsessed with maintaining their power through the administrative class.

Critical race theory had its moment at the perfect time to offer sinecures to its own organizer class who were being embedded into every workplace in the country. But it also warned the suburban middle class to avoid being seduced by President Trump’s economic populism. The political interrogations of the struggle sessions suppressed any questions about the country.

It also shut down the leftist insurgency. When Bernie Sanders first ran against Hillary, he rejected identity politics and open borders. After a campaign of harassment by black nationalist activists with puppet strings going back to the Democrat establishment, Sanders became an even bigger enthusiast of racial tribalism and illegal migration than Hillary had ever been.

That cut him off from the working class white vote and cost him any shot at the White House.

The future of his movement was outsourced to the identity politics populism of Rep. Alexandria Ocasio Cortez and the Squad for whom racial tribalism comes ahead of economic populism.

Intersectionality prioritizes racial Marxism over economic Marxism. Elements of the Left have rebelled against the political correctness and cancel culture of racial Marxism, but in a political culture where AOC is the face of the populist Left and Bernie gets to appear in memes, the  audience for the non-racial Marxism of the alumni of The Intercept is limited to conservatives.

Meanwhile, critical race theory is doing what it’s supposed to do by polarizing America along tribal racial lines and along class lines among white people. White suburban moms attend book clubs discussing White Fragility and other critical race theory texts as a form of networking. Having the right politics is crucial to your career in a variety of fields. Not all of the signs asserting that in this house the inhabitants believe in science, love, and black nationalism, are voluntary statements of belief. They’re people flying the new post-American tribal flag to fit in.

Greenfield is talking about Critical Race Theory and not the climate-change pieties Kerry is in charge of spouting, but the two are almost indistinguishable in their use as weapons against normal Americans. In the case of both you are required to feel and act guilty for simply living a normal American life, and you are to be cancelled for making the slightest departure from, much less offering an intellectual criticism of, the orthodoxy being imposed on you.

Ever more idiotic and senseless protocols to “stop the spread” of COVID-19, when it’s quite clear those have zero value, are yet another example of this phenomenon.

Kennedy doesn’t buy it, and it’s awfully effective when he and Hannity, as others have, recognize that Kerry’s actions essentially cancel out his words. There is no such thing as a “carbon offset.” That’s a fiction invented by rich leftists, not dissimilar to the indulgences sold by the corrupt Catholic church in the Middle Ages, to enable them to escape accusations of obvious hypocrisy for living in giant climate-controlled houses, driving multiple cars, flying on private planes, traveling all over the world and having carbon footprints which dwarf whole towns in the Third World. That Kerry isn’t bothered in the slightest rankles Kennedy, as it does most people.

Perhaps the real problem is John Kerry as the manifestation of the managerial elite. He’s one of the most loathsome political figures in modern American history – a man who served briefly in Vietnam, took the first opportunity to head home that he could, and then proceeded to trash his fellow soldiers and sailors as war criminals, and then embarked on a political career marked by nonstop careerism and lousy ethics, marrying a rich widow in what’s more than just an ordinary cliche’ and then wheedling his way into the posture of a statesman in selling out America’s interests to the globalist movement. Nobody in this country is better off for having had the experience of John Kerry with political power, and yet he resurfaces over and over again, ever more snooty and preening in his lectures to the proles.

It is a sin of gargantuan proportions for Biden to have inflicted this man on us one more time. But there is value in Kerry, as perhaps now he will finally be too much for ordinary Americans to stomach. If nothing else, he’s a terrific target at which Kennedy might throw bombs.

And maybe, just maybe, ordinary America might be motivated to do something about the out-of-touch, tyrannical managerial elite wielding so much control over our lives.