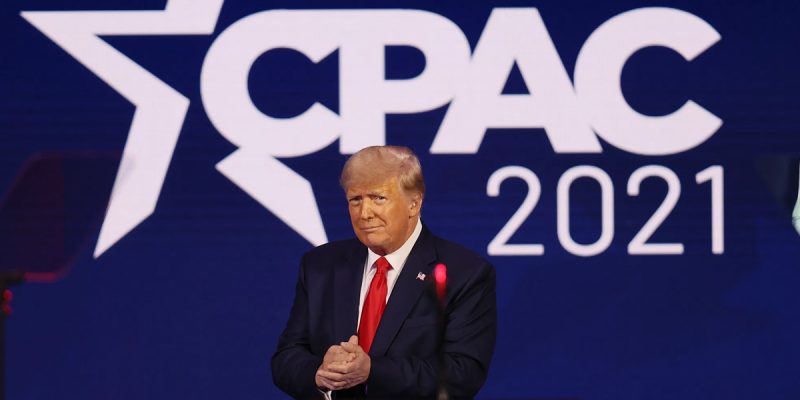 In his first public appearance since leaving the White House and being acquitted in a second impeachment US Senate trial, former president Donald Trump delivered a wide-ranging address that covered his thoughts about the MAGA movement he started, his administration’s successful pursuit of a COVID-19 vaccine, the need for comprehensive election reform, and the 2022 and 2024 elections.

Coming off rested, focused, and relaxed, the 45th president was enthusiastically greeted by not just the allowable capacity crowd inside the Orlando Hyatt Regency Ballroom but outside as well by throngs of flag waving of supporters who were not attending the conference but wanted to demonstrate their support for Trump and drown out any protestors, which consisted of a smattering of people waving profane signs assembled across the street.

Trump started off playfully asking the thousands of mostly young conservative activists if they missed him yet before addressing the matter of whether he would support the creation of a new political party.

Trump dismissed the idea of splintering the GOP as stupid and a gift to the Democrats, declaring “We have the Republican Party,” a boast supported not just by the 95% job approval rating in a survey taken of CPAC attendees but in the GOP as reflected in a recent survey where 74% of Republicans want him to remain active in the party.

As for the other big question on the minds of people regardless of party affiliation, whether he would pursue another bid for the White House, Trump teased at that possibility in a reference to the claim that the 2020 election was stolen, stating “Who knows? I might decide to beat them (the Democrats) a third time!”

But beyond another opaque comment made in the same vein towards the conclusion of his speech, Trump gave no confirmation that he was committed to another bid for the presidency.

However, Trump did have a great deal to say about the 2022 midterms and elections in general.

Though leaving his 2024 intentions unclear, Trump signaled that he would be fully engaged in the 2022 midterms to help the GOP take back Congress and elect conservatives to state offices.

And perhaps settle some scores regarding the second impeachment along the way.

The former president listed each US Senator and US Representative who voted to either impeach or convict, including Bill Cassidy, though Trump gave special attention to a pair in particular.

Trump referred to Liz Cheney as a warmonger and touted the rebukes she received by the GOP organizations in her home state of Wyoming, where she serves as the at-large congresswoman and is up for re-nomination and re-election in 2022

And then Trump turned his attention to perennial bete noire Mitt Romney (currently) of Utah.

Lamenting that the Democrats lack the RINO equivalent of a Romney in their ranks, Trump stated that collaborationist Republicans who are in league with the Democrats reflected a disconnect between DC Republicans and Republicans from around the rest of the country and were a threat to both the GOP and America as well.

Trump then encouraged supporters to back his Save America PAC, the political arm of his post-presidential operations, as a means of challenging RINOs in the upcoming party primaries.

Though Trump skirted the big question on running for president again, it’s apparent from his CPAC 2021 speech that he has no intention of leaving either the political scene in general or the Republican Party.

Interested in more national news? We've got you covered! See More National News
Previous Article So Whose Mayor Is A Bigger Moron – New Orleans Or Seattle?
Next Article Now Bobby Jindal Weighs In On The Trump/Trumpism Question