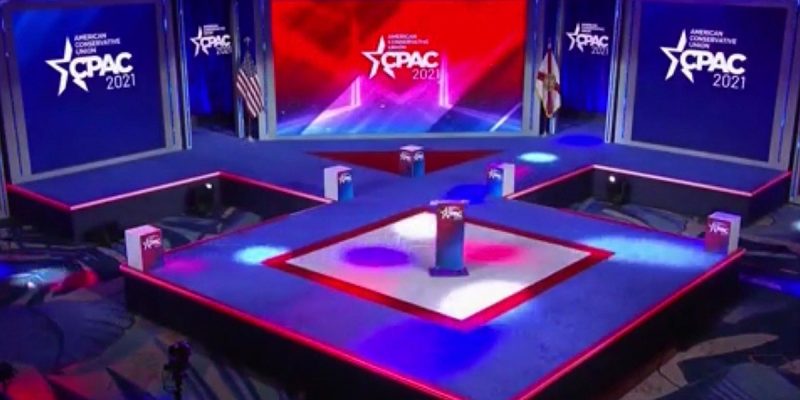 The folks at the American Conservative Union were determined to hold their annual CPAC conclave.

In the past, the event was located at the ridiculously-challenging-to-access National Harbor site in one of the coldest times of the year in DC.

However due to Maryland’s tight COVID-19 restrictions, if CPAC was going to be held they were going to have to take the show on the road.

Hence a reopened Florida became the optimal host state and specifically the cavernous Hyatt Regency Convention Center in Orlando would be the ideal venue having adequate space to conform to distancing.

That Matt Schlapp and the ACU pulled off this logistical feat even during what we hope are the waning days of the pandemic was commendable.  But the Leftist tandem of rigged media and Twitter locusts could not permit this.

So as the conference opened, a controversy erupted – or rather was invented on social media – about the design of the stage.

Now, if you actually attended the conference, all you noticed at eye level was that the stage was in the shape of a wedge jutting into the crowd for maximum viewership of the speakers.

But alas, with the help of the perpetually-outraged leftivists on the Twitterverse, they saw it from a raised angle looking down upon the stage as a NAZI symbol.

Or an iron cross, like that tat the staff-grooming former US Reprepredator Katie Hill has inked on her hip?

Turns out if you draw a red line around the blue part of the stage you see a Nordic rune!

Funny, I saw the head of an ant with bent antenna or the Las Vegas-based Spec’s liquor chain rabbit mascot.

But apparently it was very clear that it was such an obvious symbol of the Third Reich that somehow this student of World War II who has visited museums on the conflict in over a dozen countries had never seen it before and thusly required searching for this symbol for quite a long time online to discover it.

But there you have it: an organization went out of its way to create this elaborate Nordic-rune-symbol stage that nobody could even see unless you flew a drone over it.

And precisely for what purpose?

Here’s the part where any mocking of President Trump’s claims of having been robbed of the election should be set aside for the wild theories and accusations being spouted off by these new experts of National Socialist iconography, gaining such secret knowledge by having once viewed a forwarded meme.

Now if the establishment media were a credible outlet for information and not a leftist propaganda racket they would have dismissed the stage issue as too many partisans staring at the clouds and straining their eyes and imaginations looking for the silhouette of Goering in the vapors.

But the media being what they are went along with the narrative being pushed out the Twittersphere and further rolled that into their other hyperbolic reporting about people they despise.

Hyatt Hotels then had the bad judgment, after first defending their acting as host for the event, issuing a shrieking press statement as if they were some kind of victim in all of this, castigating their customers for being rude and refusing to wear masks and for people allegedly waving hate symbols such as the rebel flag around.

Having attended all four days of CPAC and having roved around the entire site, I didn’t see any of the afore-accused symbols of hate. But I did see plenty of Jewish attendees wearing kippot and young black conservative activists sporting red MAGA hats.

The only entity that went out of its way to insult and degrade its guests was the Hyatt management – and not the ACU or CPAC management.

And yes, people were wearing masks.

An overwhelming number were doing so but a few cranks made a point of being jerks in their refusal. CPAC staff were alerted to these situations and tried to intervene so as to resolve the matter on their end and not involve hotel staff.

Also being jerks were Hyatt employees who castigated me for not wearing a mask as I was five steps away from the exit just after I had just taken mine off to grab some fresh air.

Their staff walked around the ENTIRE time carrying signs asking people to wear masks and approached anyone who removed theirs if only for a moment with the tone getting more belligerent come Saturday and Sunday.

Now, if the folks at Hyatt were so worried about COVID-19 spread, then why did they not take quick action to resolve the problem of three of their four elevators in their One Tower being inoperable for an extended period and thus leading people to crowding inside the one functioning elevator to ascend the 20-something story building?

(Note: they only had one of the three down lifts working again by the conclusion of the event).

The shame of it is that CPAC did the Hyatt a huge favor by holding their event in what was otherwise a deserted facility. I ended up staying a night over and had never been in such an empty four-star hotel in my life.

One of the bellmen was gushing over the event, saying it had been the first time in months he’d been asked to work and he was grateful for the opportunity.

Furthermore, the attendees were generally pleased with the venue and when asked by a speaker at the conclusion of the conference if they wanted to return there next year as opposed to National Harbor, the attendees roared with approval.

So by trying to appease a disingenuous blue mob on Twitter through their virtue-posturing on social media, and their condemnation of the event and the people who spent money at their property, Hyatt has almost certainly and foolishly lost future business from the entity and the individuals.

I hope that the management treasures each and every heart icon pressed on their Twitter account for needlessly libeling and villifying their customers to satisfy the bots, trolls, and assorted nuts who couldn’t find better use of their weekend.

Good luck trying to land that ANTIFA confab in 2022, Hyatt.

Interested in more national news? We've got you covered! See More National News
Previous Article Now Bobby Jindal Weighs In On The Trump/Trumpism Question
Next Article Kyle Ardoin Did The Only Thing He Could Do In Canceling That RFP