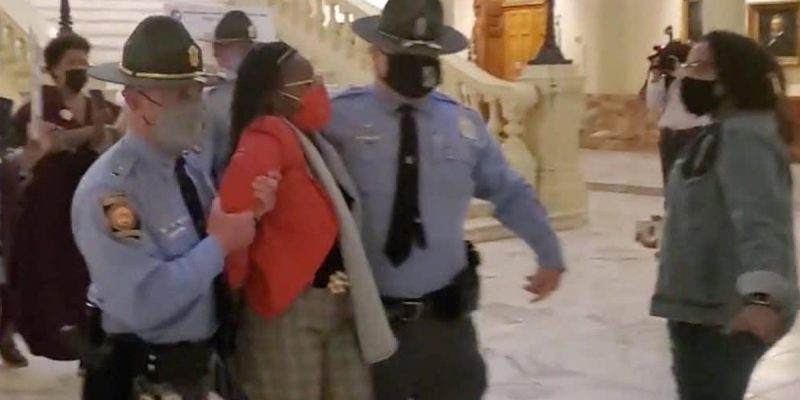 The 2020 election was very controversial for the state of Georgia as many questions were raised about the integrity of the vote. There were concerns about a multitude of issues such as the possibility that ballots were scanned multiple times to questions about mysterious suitcases of votes being counted after GOP observers were no longer present.

Absentee and mail-in ballots were also counted despite the lack of voter identification requirements. Due to concerns about the COVID-19 pandemic, 1.3 million voters in Georgia mailed in absentee ballots in the 2020 election.

With the changes and confusion, there was a long delay in the election results being certified. While Georgia officials claimed that the results were accurate, many Republicans were upset and demanded that the 2020 election issues be addressed in new legislation.

In response, an election reform bill was passed by the Georgia Assembly. It received strong support from Georgia Republicans, but was opposed by state Democrats. The state House of Representatives voted 100-75 in favor of the bill and the state Senate approved it by a 34-20 margin.  On Thursday, Georgia Governor Brian Kemp signed the bill into law.

The new bill requires identification for absentee ballots and limits the number of remote voting locations. According to U.S. Representative Marjorie Taylor-Greene, these reforms are essential because “too many absentee ballots” were “mailed in” without verification in the last election. In her view, this legislation will lead to “secure elections.”  She said, “Here’s the facts: We’ve got to have I.D. to go vote, you have to show an I.D. to buy alcohol, you have got to show an I.D. to buy tobacco, and you have to show and have a driver’s license to drive.”

Of course, Taylor-Greene is correct, but Democrats have a much different view. President Joe Biden labeled the bill “Jim Crow in the 21st Century,” and claimed it was an “atrocity.” He said the Justice Department was “taking a look as well.”

Not surprisingly, Democrats in the Georgia Assembly were outraged by the new bill. The State Senate Minority Leader, Democrat Gloria Butler, maintained that the new legislation was “worst assault on voting rights…since the Jim Crow era.” While Butler condemned the bill, State Representative Park Cannon (D-GA) tried to stop the Governor from signing it. She repeatedly knocked on his door and tried to enter while he was signing the legislation into law. She continued despite warnings from members of the Georgia State Police. Eventually, Cannon was arrested while her supporters created a ruckus outside of the Governor’s office yelling at the state troopers and waving a sign reading “Stop Suppressing Our Vote.”

This insanity is typical for Democrats who object to any election integrity measure. The new Georgia law does not suppress anyone’s vote. The goal is to guarantee fair elections without fraudulent votes. There is nothing “racist” about requiring voter identification and limiting the number of drop boxes for ballots.

Predictably, the “woke” left who control the media, Hollywood and professional sports are now demanding a boycott of the state of Georgia. The Executive Director of the Major League Baseball Players Association, Tony Clark, says that his organization is open to recommending that the All-Star game be moved from Atlanta in the summer. The National Black Justice Coalition demanded that players refuse to participate in the upcoming Masters tournament in Augusta next month.

Director James Mangold claimed that he will “not direct a film in Georgia,” while activists and Democratic politicians are blasting the Coca-Cola company, based in Atlanta, for not condemning the new law. The Savannah Mayor, Van Johnson, tweeted that he did not “feel like purchasing or consuming” Coca-Cola products.

Fortunately, some civil rights leaders, like Bernice King, daughter of Martin Luther King, Jr, opposed the boycott. She said that the boycott would “hurt middle class workers and people grappling with poverty.” Not only would the boycott bring economic harm to Georgia, but it is also totally unwarranted.

The new law reflects the will of the people of Georgia as it easily passed both the House and Senate of the state assembly and was signed by the Governor, elected by the voters. In many ways the new law expands voting rights in the state. The hours for voting on Election Day were extended and the number of Saturdays for early voting was increased to two, with an option for voting on Sunday as well.

Another provision of the new law is that it reduces the time for voters to request an absentee ballot. This is a positive step, according to State Representative Jan Jones (R-GA). The new law “will increase the likelihood of a voter’s vote being cast successfully.”

Hopefully, it will rectify the problems that occurred in the 2020 election. On Wednesday November 4, the day after the election, there were still 149,000 ballots that remained to be counted. By the time the counting had finished, President Donald Trump’s small lead vanished, and Joe Biden was in front.

The new law was immediately challenged in federal court in Atlanta by three liberal activist groups, Rise, Black Lives Matter Fund, and the New Georgia Project. The legal issues may eventually move to the U.S. Supreme Court, which will hopefully rule in favor of the new law.

It is not racist to demand identification for absentee and Election Day voting. Democrats who make those arguments are insulting minority voters and exposing their true agenda, promoting fraudulent voting.

Among all of the issues this country now faces, none is more important than guaranteeing our elections are fair and only lawful votes are counted. Without free and fair elections, we cannot sustain our constitutional republic.