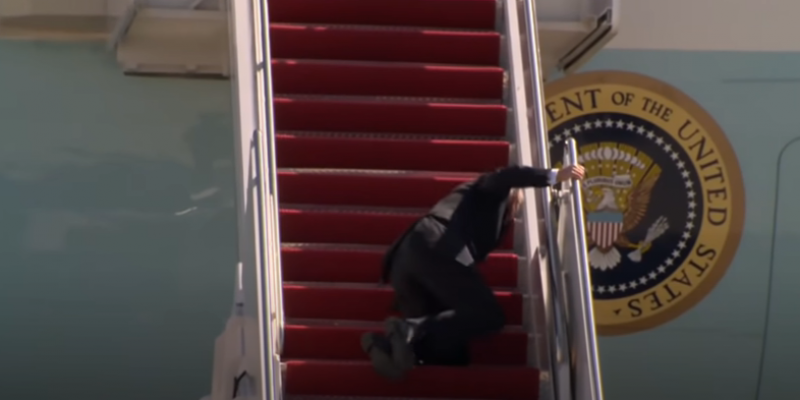 The evidence of President Joe Biden‘s mental and physical health degradation is continuing to add up.

Despite reports distributed by the mainstream media such as Politico stating the contrary, Biden is hardly “sharp as a tack”  where his campaign was “run from the basement” with constant lids because of outbursts of gibberish as well as being “unaware” he’s groping women.  It has only gotten worse since he occupied the White House, from appearing to state the N-word, to falling down the stairs of Air Force One multiple times.  His aides routinely kick the press out of the room when there are any signs that Biden is appearing to falter.

This was before the March 25th press conference which took place 64 days after the end of end of Donald Trump‘s first term as President of the United States.  To put this into perspective, most Presidents had their first press conference within the first month — Ronald Reagan and Bill Clinton had theirs within the first nine days.  One must go back a century to Calvin Coolidge to find a delay as long as Biden’s.

The choreographed presser limited the number of reporters in attendance, provided Biden a “cheat sheet” in oversized font with specific reporters to choose and not choose with laid out answers, yet the conference still went off the rails. Biden would loose his train of thought mid sentence, laugh then say he misses Trump, wander off from the podium, among other symptoms of dementia he displayed.  Its was so noticeable that the mainstream press even had to acknowledge, something they were giving Biden a free pass on up to this point.  One America News Correspondent Jack Posobiec tweeted out Biden is Falling Apart.  Broadcaster Steven Crowder dedicated a whole show to roasting the press conference.

It’s not just the press speculating at this point.  Dr. Ronny Jackson, who was White House Physician under Obama and Trump and is currently  a representative for Texas’s 13th Congressional District stated on Twitter, “I served as White House physician under THREE Presidents. I’ve seen what it takes physically AND mentally to do the job. I can tell you right now that the way Biden is hiding from the public is a MAJOR red flag. Something’s not right!”  Jackson also stated in February 2020 that Biden should undergo a cognitive assessment, to which Biden when asked lashed out.

Could masks be the culprit?

Dementia or not, double-mask wearing will not help address his many missteps and senior moments.

The Hayride has documented well the adverse health effects of wearing COVID facemasks.  Citing the CDC’s own publication from June 2020 which states in black and white that COVID facemasks trap carbon dioxide leading to cognitive loss and even cardiovascular disease.  We also cited a Harvard Study showing breathing in as little as 945 PPM of CO2 lowers cognitive ability 15% and at 1400 PPM of CO2 cognitive ability reduces by 50%. Double-masking traps a greater concentration of CO2.

U.S. Sens. Rand Paul and Ted Cruz had a lot to say about the mask mandates over the past couple weeks.  Paul said that masks were “theatre” for those that have either taken COVID vaccines or have been infected and now have natural immunity.  Cruz also takes the stance that he’s vaccinated so he should not be forced to wear a mask following CDC guidelines.

For Biden to wear a mask let alone two at this point after he was vaccinated is not only theatre, but is also irresponsible and could be accelerating his cognitive decline in a similar fashion someone with lung cancer would have metastasis quicken if they continued to smoke.  This is not only affecting him, but also sends the wrong message to those that have cognitive loss to wear a facemask, especially since the masks are mandated for federal employees as well as for interstate travel executive order.

Back to Biden’s health: Betting odds have opened to whether Biden would complete a full term or that he will fall short because of health issues that he either resigns, is impeached or is removed from office through the 25th Amendment.  Keep in mind Biden has had two brain aneurisms, one of which bursted, which led to a pulmonary embolism and deep vein fibrosis as well as multiple bouts with atrial fibrillation of the heart.

It could be viewed as a miracle that Biden made it to age 78. Any way you look at it, Biden wearing two masks seems to be accelerating that final outcome. The evidence presented shows that the masks trapping CO2 will accelerate cognitive loss and lead to a quickening of the loss of quality of life for those individuals who constantly wear them, and that does not exclude the nation’s chief executive.

To again quote Posobiec, this time referencing the late, great Rush Limbaugh: “You would know it is the beginning of the end for Biden when the media started covering his family’s scandals, then Obama would side with them, and Kamala would be installed as president” and “the only real question is if Jill lets Biden resign with dignity, or refuses and Kamala goes full 25th [Amendment] on them.”