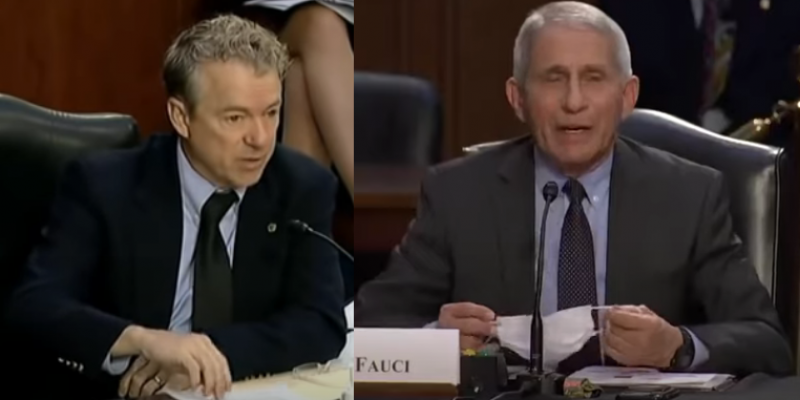 The public resent of the government mandate of wearing of the COVID-19 Facemasks continues to grow.

On March 18, 2021 Sen. Rand Paul, who also happens to be a medical doctor, grilled Dr Anthony Fauci over the potential federal mandate of mask wearing through 2022.  Sen. Paul calls wearing the mask a form of theatre by those who are immune to the COVID-19 virus, whether through past infection or by using Paul’s argument taking the vaccine.  In the combined viewing of the hearing totaling over 1.5 million views Paul states, “There’s virtually zero percent chance you’re going to get it, and you’re telling people that have had the vaccine who have immunity. You’re defying everything we know about immunity by telling people to wear masks who have been vaccinated.”

Dr. Paul reiterates that there is no science that states after immunity there has been any reinfection from COVID and even went to far by stating, “If you want to get rid of vaccine hesitancy, tell them you can quit wearing your masks after getting the vaccine.  You want people to get the vaccine, give them a reward instead of them that the nanny state’s going to be there for three more years and you’ve got to wear a mask forever.  People don’t want to hear it and there is no science behind it.”

Reading between the lines of the testimony, Dr Fauci seems to acknowledge that the vaccines are not as effective as they are touted to be, where he states according to Newsweek, “Those with the vaccine should still wear masks around unvaccinated people and he pointed to highly contagious variants of COVID-19 that could be a threat to those who’ve been vaccinated.”  This is especially concerning considering the controversy surrounding the COVID-19 vaccines, especially those that are of the mRNA variety and the adverse side effects that they cause along with the possibility that COVID vaccines could become mandated in some form.

Instead of being a cheerlead for the vaccines, Sen. Paul should advocate that anyone who has immunity to COVID-19 through past infection should not be required to wear a mask, whether that is testing positive for an active case, or testing positive for COVID antibodies and/or b-cells.  Paul stated that the antibodies and b-cells do not disappear and that the b-cells especially are retained for the lifetime of the individuals who are infected referencing Small Pox and Spanish Flu.  Meaning that COVID-19 antibodies are constant with decades of epidemiology research and don’t disappear after a few months as was previously reported.  So the question is why is there a push for those that have been previously infected with COVID to also take the vaccine?

Another item Sen. Paul should have brought up is the adverse health effects of wearing the masks themselves.  They are not just a nuisance but can cause serious health problems. An article recently uncovered that was published by the CDC in June 2020 states in black and white the side-effects of wearing a mask, specifically the masks trapping carbon dioxide or CO2.  The article states the masks cause breathing resistance could result in a reduction in the frequency and depth of breathing, known as hypoventilation and that as little as a hour of wearing a mask.  The article further went onto elaborate of the side-effects of increased CO2 concentrations in the mask wearer that include:

The Hayride has covered this in the past specifically regarding the cognitive loss caused by COVID masks trapping CO2 where according to a Harvard Study breathing in as little as 945 PPM of CO2 lowers cognitive ability 15% and at 1400 PPM of CO2 cognitive ability reduces by 50%.  Apparently facial recognition has also been reduced  What is also disturbing is not only the brain damage that is caused by the masks, but the adverse cardiovascular effects on the heart and lungs along with the reduction of blood sugar and dehydration.  Are the long term health effects caused my the masks not only the potential of early onset dementia, but also congestive heart failure and diabetes?

Lawsuits have been challenging the mask mandates across the country with lawsuits filed against the City of Austin, Texas going back to April 2020.  When Texas Gov. Greg Abbott lifted the statewide mask mandate in March 2021, it also took away the local governments ability to enforce their own.  Texas Atty Gen. Ken Paxton warned the city of Austin over this stating, “The decision to require masks or otherwise impose COVID-19-related operating limits is expressly reserved to private businesses on their own premises. It does not rest with jurisdictions like the city of Austin or Travis County or their local health authorities. ” Paxton also went on to state, “We have already taken you to court under similar circumstances. You lost. If you continue to flout the law in this manner, we’ll take you to court again and you will lose again.”  The city of Austin did not back down leading to the AG suing the city.

Democrat District Judge Lora Livingston refused to issue an injunction against the city before the case goes to trial stating, “People have been wearing masks for a year. I don’t know that two more weeks is going to matter one way or the other.“  Makes you wonder if Judge Livingston seems to disregard the arguments for and against the mask mandate and just wants to maintain the status quo.

The science against the mask mandate continues the pile up with the adverse heath effects both immediate and long term.  While the CDC article focuses on healthcare workers specifically, The scenarios of mandates masks can be applies to all shift workers that are currently required the wear masks.  The CDC article went on to state that anyone that is forced to wear a masks should take frequent breaks and take the mask off routinely to prevent more than 1 hour of continuous wearing.  Even Variety acknowledges that the culture on productions has changes, to trim the fat to get the shots needed as quickly as possible so production crew can leave the sets to go home and take the masks off. Hopefully the Texas Attorney General’s Office takes all this sound evidence of adverse health effects into account in their arguments at trial against the City of Austin to not only end the mask mandate once and for all in Austin Texas, but also open the door for other litigation against the mask mandates across the country.

As The 45th President of the United States Donald Trump stated The Cure can’t be worse than the problem itself.  It seems every measure that the government put in place going back to the lockdowns not only didn’t work but caused widespread collateral damage.   It seems COVID falls into the quote form Rahm Emanuel, the former Mayor of Chicago and Advisor to Barack Obama who stated Never Let a Crisis Go To Waste.  The response to COVID seems to be a power grab not only to have more control over the economy, our elections and our everyday, which as the evidence is pointing out is counter productive to our health.

Having a national mask mandate trapping CO2 lowing the cognitive ability of the population at large seems like a surefire way of moving Idiocracy from the fiction section to current events. George Carlin said it best, that the people up top don’t want a smart free thinking society, they want people that are just smart enough to be a worker bee and dumb enough to accept it.  In fact George was a ahead of his time and more or less predicted the response to COVID.    This would also explain why cancel culture is prevenient, because the Karen’s of the world would be offended by everything stated here and that is the ultimate downfall of society which can do more damage than the virus ever could.

Interested in more news from Texas? We've got you covered! See More Texas News
Previous Article This Might Be The Worst Campaign Robocall We’ve Ever Heard
Next Article SADOW: The Voters Demanded Change In Bossier City; Will Politicians Deliver?