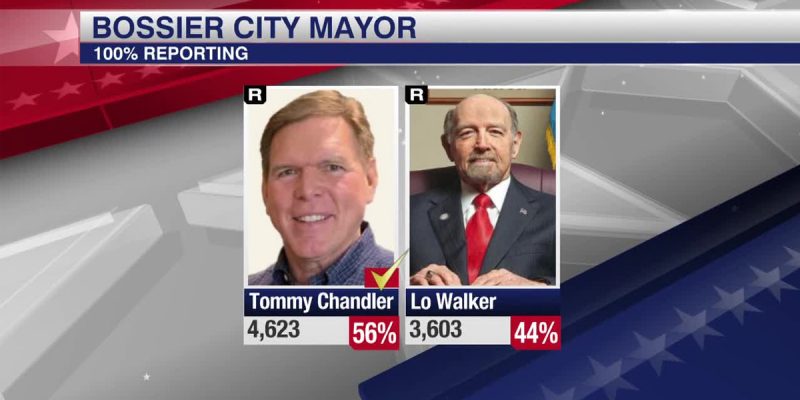 In the clash of competing philosophies, generations, and campaign strategies, Bossier City election results showed the tide has begun to turn against the parish’s old guard.

This weekend’s municipal contest at best presented the chance to put a down payment on dismantling the long-standing old Bossier power structure. While over the past two decades the city underperformed fiscally, allowed debt to put every resident in hock nearly $7,000 each, and saw crime become increasingly problematic, this cabal was more committed to counting coup on Shreveport, puffing their chests out, and breaking their arms trying to pat themselves on their backs than to addressing those deficiencies.

Importantly, all of the challengers and McAllister voiced support for term limits in some form – a direct shot across the bow to the incumbents who collectively have served an average of about 20 years each in office. Tellingly, Maggio and the incumbents did not.

Limitation also would go for the mayor’s office as well, as supported by the GOP challenger to Republican four-term Mayor Lo Walker, Tommy Chandler. Thus, for any progress to occur on that front or others, challengers plus McAllister would have had to sweep the election – a tall order given Jeter’s Democrat label that draws at best tepid support from residents generally. Additionally, while Maggio raked in generous donations from the Bossier political power base, McAllister ran a shoestring campaign.

That base also threw its monetary weight around in the other contests, favoring the incumbents. That showed up most prominently in the mayor’s race, where in the first two months of the year Walker had raised  $79,000 and spent $120,000, and while Chandler picked up about the same but spent about a third of that, with the average donation size (including large ones specially reported this month – around $10,000 for Chandler and $17,000 for Walker – and discounting a $20,000 loan Chandler made to himself) for him around $721 while Walker, with many fewer donors (and some dipping multiply to the maximum through different legal entities), collected on average $1,046. Even more significantly, entities with city business disproportionately gave to the incumbents.

The pattern only partially replicated for the at-large races. Through February Jeter spent little and Smith not much more. But Larkin didn’t spend much more than Smith, with only Montgomery – who had by far the largest war chest at the year’s start of over $50,000 – spending into five figures.

The latter strategy carried risk. Bossier City has a disproportionately unrooted electorate, with significant portions either military transients who register to vote in national elections and don’t care about other kinds or refugees from Shreveport who have (as yet) minimal investment in city politics. Media strategies don’t reach these people well.

By contrast, direct contact does well in mobilizing the disaffected who care about city politics and activating the less interested, rousing a portion of them. Yet having lost muscular memory about direct campaigning – Larkin and Montgomery hadn’t run a campaign since 2009 although Montgomery issued a much more robust media sally, and Walker not since 2005 – by and large the incumbents, except for Irwin who has faced a challenge almost every term which in and of itself connotes a constant undercurrent of dissatisfaction with him, banked everything on media campaigns.

In the end, this proved to be their undoing. The old guard, which ironically relied more on newer mass media campaigning, suffered at the hands of the newer guard who took a more traditional path of direct and personal voter engagement. Montgomery led the at-large field with nearly a third of the vote, but Smith came next, not only nipping Larkin at the wire but also with just over a quarter of the vote, avoiding a runoff. Cheatham, clearly from his background and campaigning energy the highest quality opponent Irwin ever faced, blew out Irwin by nearly two-to-one.

Yet most consequentially, Chandler took down Walker. In municipalities with a full-time mayor and part-time councilors, the mayor has a tremendous advantage in setting and steering the policy debate, so Chandler, backed by a different and largely newer set of elites than the cohort decades in its making supporting Walker and the council incumbents, now will call the policy-making tune.

Whether the remaining old guard on the Council has the vim, vigor, and interest in trying to counter that wherever their interests and Chandler’s diverge will shape city politics over the next four years. At the very least, Bossier City voters ponied up a down payment on changing the city’s policy direction that was shaped over the past several decades.