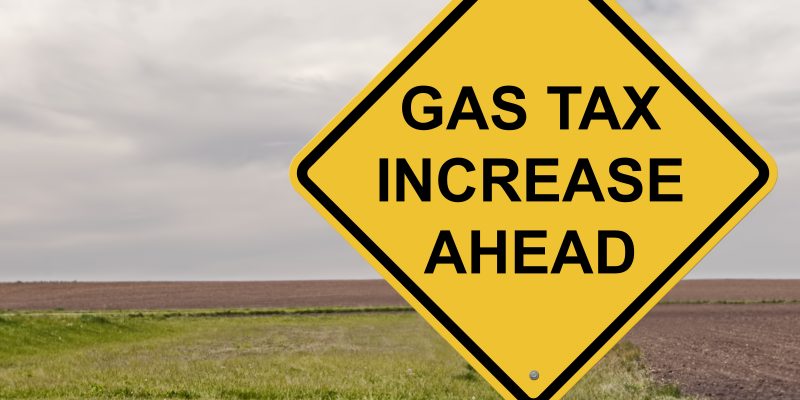 …perhaps we can take stock of the situation and ask just what on earth the second-term Louisiana legislator was thinking in bringing that bill.

Rep. Jack McFarland, R-Winnfield, has dropped his plans to file a gasoline tax increase during the upcoming legislative session due, in large part, to the expected windfall in federal pandemic relief dollars headed to the state.

In a letter today, Erich Ponti, whose industry group Louisiana Coalition to Fix our Roads has been advocating for the gas tax hike, notified his members that McFarland will not be filing the legislation this session and instead “will shift his focus to identifying alternative funding sources that can garner the votes necessary for the package.”

Ponti adds, “While this shift is unexpected, we nonetheless will remain committed to our core missions, which is the greater sustainable funding for roads and bridges in our state.”

McFarland’s Government Reform in Transportation, or GRIT, Act, would have raised the state’s gasoline tax by 10 cents in the first year and by an additional two cents every other year until 2033. Each one-cent increase would have raised an estimated $30 million, which by 2033 would total some $660 million a year in new revenue.

But while the idea of a gasoline tax increase has been gradually gaining support, even among those in business and industry who previously opposed it, passage would have required a two-thirds vote of the Legislature, which is always a hard sell and would have been particularly difficult in light of the $5.18 billion share of pandemic relief aid Louisiana will get from President Biden’s American Rescue Act.

Members of Louisiana’s congressional delegation have suggested the state can devote a portion of that money to addressing its transportation infrastructure needs, which include a $15 billion backlog of deferred maintenance not including new capacity projects like a bridge across the Mississippi River in Baton Rouge.

“A couple of things have changed over the past couple of months,” says Scott Kirkpatrick, executive director of CRISIS, a Capital Region-based industry group that lobbies for transportation infrastructure. “Not only is the amount of federal money being discussed large, but more of the chatter has turned to how the state can get key projects through using that federal funding.”

They’re all putting a brave face on this, and they’re saying that Biden’s billions make the gas tax unnecessary.

McFarland’s gas tax bill fell apart because he couldn’t get anybody to commit to supporting it. And Ponti, the former state legislator-turned-lobbyist for the asphalt contractors who took the lead in this LCFOR organization which pushed the gas tax bill, is now in a position of doing major damage control in order to keep his own job.

Here is as good a place as any to point out that the minute Joe Biden took office and commenced a full-on assault on domestic energy production, which was always going to drive the price of oil sky-high and with it the price of gasoline at the pump, there should have been no more discussion of an increase in the gas tax. Gasoline prices are up some 30 percent since Biden’s inauguration; exactly how did Ponti and McFarland figure they’d be selling an even larger increase, this time generated by Louisiana’s own elected politicians?

Who in their right mind would have signed on to that?

McFarland said he was going to go around the state and lobby his colleagues to support the bill. That was a dead giveaway this thing was never going anywhere. If the bill has support you don’t need to go begging hat in hand to your colleagues; they’ll come to you wanting to be co-authors.

Frankly, if it was Ponti structuring this fiasco he ought to apologize to McFarland for hanging him out to dry. And not just for what was in that letter he wrote to his members in which he said it was “unexpected” that the legislator dumped plans to bring the bill.

For something like this, you don’t attach it to a single legislator, unless you can get the House Speaker or Senate President behind it. That’s dumb. If he’s on his own he gets murdered for being a tax-raising lefty, and everybody runs from him.

Instead, you tout the bill itself and you round up co-authors who don’t lend their names to it until the last minute, at which time you unveil your bill sponsor who already sits atop a broad coalition in favor of it.

But that wasn’t possible with respect to this bill, because nobody wanted to support it. Not while gas prices were spiking and not while Louisiana’s disgustingly bloated state government, which gets fatter and fatter off the federal teat while our people drown in personal debt thanks to a moribund economy not expected to recover for another year or more, is about to reel in billions from Uncle Sugar.

But as we say over and over again, the problem has never been a lack of funding. It has always been waste and corruption and inefficiency in how the money is currently spent. If this state actually prioritized infrastructure while living within its means and that of the private economy to fund state government, there would be lots of resources available for roadbuilding.

And nobody opposes the building of roads. The issue isn’t that Louisianans don’t want to spend on roads. It’s that we’re beyond tired of the lies these people have told us again and again, that if we just give them a little more money they’ll finally fix things this time.

No. Sorry, fellas, those days are over. Before you can have any more blood from the turnip that is the private sector in Louisiana, you had better establish some credibility for yourself.

And while McFarland isn’t one of the worst malefactors in that legislature by any stretch of the imagination, the credibility issue is a problem for him just like everybody else. After all, he allowed himself to get suckered into becoming the Gas Tax Man by a special-interest lobbyist who told him this would make him the next Speaker of the Louisiana House of Representatives.

Instead, he likely went a long way toward costing his wife her election to the Board of Elementary and Secondary Education. She finished third last week. The joke we heard was that McFarland has been sleeping on the couch ever since.

In sum, this whole thing is a fiasco. And it’s about time our legislators learn that the truth can’t be found in that capitol building, where the Erich Pontis ply their trade on behalf of rent-seeking contractors. It’s back home in their districts, where the people have had it with politics and politicians and their persistent poor performance, and they won’t pay for more of the same.

Let’s have no more talk of gas tax hikes. Let’s start talking about cutting and even eliminating taxes, like our neighbors in Texas and Mississippi are doing. Wake up and start becoming competitive with the outside world, please.