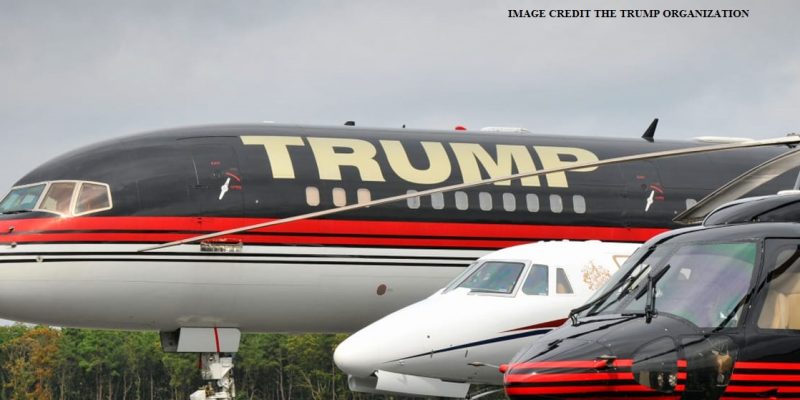 The more things change, the more things stay the same.  While a lot has changed in 2021, what has stayed the same is the 45th President of the United States of America Donald Trump has been living rent free in minds of the mainstream media, as well as their continued publications of fake news of President Trump.  Most recently it has been the “report” that President Trump has “downgraded his private jet”  from his Boeing 757 to a Citation X with Forbes publishing From presidential Boeing 747s and 757s flying as Air Force One and his own notable VIP airliner, Donald Trump was recently spotted boarding a mere run-of-the-mill everyman type private jet.     With other publications reporting that Donald Trump has been “savaged” on social media being labeled “how the mighty have fallen.”  These websites have republished this same photo from Getty Images either captioning  A Cessna Citation X like the one used by former president Donald J. Trump leaving New York City or even implying that this was the actual plane Donald Trump used.

Zooming in on the Getty Photograph the tail N930QS which is a NetJets aircraft.  All NetJets aircraft have a tail number ending in QS, and the NetJets ownership of the plane in the image is confirmed by Flight Aware.  Now that would be a sensational headline, “Donald Trump falls so hard that he can only afford to charter a jet” Except it’s not true.  In fact a simple google search trying in “Trump Aviation” shows not only does President Trump own the Citation X in question with the tail number N725DT, he owns four other aircraft, the famous Boeing 757 nicknamed “the T-Bird” and “Trump Force One” as well as three Sikorsky Helicopters.   While it’s been reported that one of the helicopters is for sale, as of this publication it’s still owned by the Trump Organization. The website was created pre-presidency and shows the Trump organization owned all five aircraft before the 2016 election.  In fact President Trump owned the Citation since 2013 and purchased the 757 in 2010.

So why would anyone own different aircraft of different classes?  Would it be considered “slumming it” to fly in a “lessor” aircraft?  Not at all and it all depends on the mission. It’s the same reason why people that can afford to own multiple cars have a car collection, taken to the exaggerated form by Hoovie’s Garage.   You can’t take a family grocery shopping in a sports car or have a fun Sunday Drive in a van.   Likewise there are very specific reasons why Donald Trump would own an aircraft significantly smaller than the 757.  Airport access for starters.  Most general aviation airports (often called private airports outside of the aviation industry) cannot support airliners.  Not only with length of the runway needed to takeoff and land, but also the thickness of the touchdown zones to support the added weight of airliners of private jets.  Also many  flight base operators otherwise known as FBOs or “private terminals” by the passengers, are not equipped to handle aircraft as large as converted airliners,  even FBOs at airports that handle airlines.  In fact the Trump Aviation website says as much, The Trump Cessna Citation is another very special feature within the Trump Aviation fleet. This high speed jet is often referred to as a “rocket in the sky,” flying at speeds up to Mach .92 and altitudes as high as 51,000 feet. It is one of the fastest in the world and allows for entry into smaller airports.

The other two highlights of the Citation X as pointed out is it’s speed.  mach 0.92 or 9/10ths the speed of sound.  The 757 tops out at 0.80 mach.  That’s a significant speed advantage.  The Citation is also a more discreet aircraft with just a generic paint scheme by design for times when the Trumps want to travel in a lower profile setting and to get from point A to point B is a quicker fashion without pomp and circumstance the accompanies the 757.

The Forbes articles rags on Trump for not flying in a Gulfstream, the specific advantages of the Citation over the 757 are not exactly present in a gulfstream especially the newer G650s.  While not as large as a 757, Gulfstreams are significantly largeer than Citation Xs  and thus would not be able to get into as small of airports at the Citation.  Likewise Gulfstream have a presence that Citations do not, thus are less discreet to fly.  Once again if the Trumps want to fly in “with style” they would take the 757.

One more thing that Trump is unfairly criticized for is the age of the aircraft.  The Citation was built in 1997.  That however isn’t that old when considering that most jets currently flying are of that age or older.  example Taylor Swift’s Falcon 900 was built in 1992.  Your friend’s single engine aircraft was more than like built in the 1970s or even older.  The FAA requires regular maintenance and inspections of all aircraft to remain legally airworthy, so there is no comparison between a decades old aircraft in flying condition and a decades old hooptie that is still on the road.

Ultimately this story amounts to a nothing burger, where the press are desperate to report anything on Donald Trump because apparently their very survival depends on it. They should have thought about that when they were throwing everything including the kitchen sink against the wall to get Trump out of office and well… they made their bed and now have to lay in it.     Personally I would not mind riding on any or all of Trump’s aircraft, or better yet get type-rated to fly them myself.  Are you reading Mr. President!?