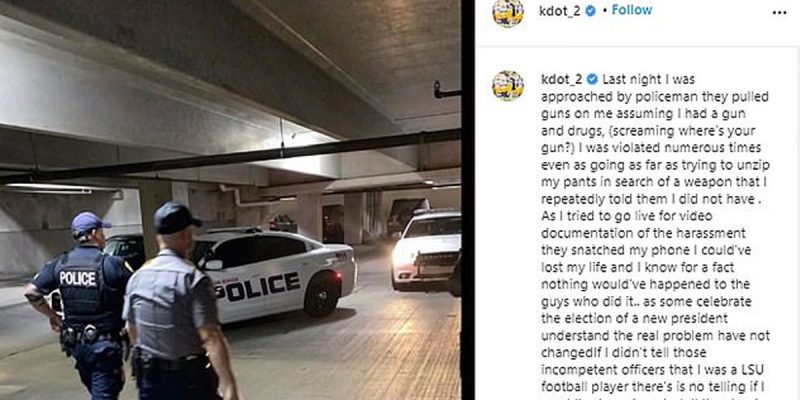 We didn’t cover this when it happened, largely because at the time we were so disgusted with LSU’s complete capitulation as an institution to the falsities and stupidity of the Black Lives Matter movement (have you noticed that since Joe Biden was elected president there is virtually no news being made at all on the BLM front, even while the trial of Derek Chauvin in Minneapolis is going on?), but last fall a freshman wide receiver on the LSU football team named Koy Moore was in the news complaining about how he’d been “violated” by three allegedly racist Baton Rouge cops. Moore said he’d been accosted by the cops and treated like a criminal, though he wasn’t arrested and nobody hit him or anything like that. 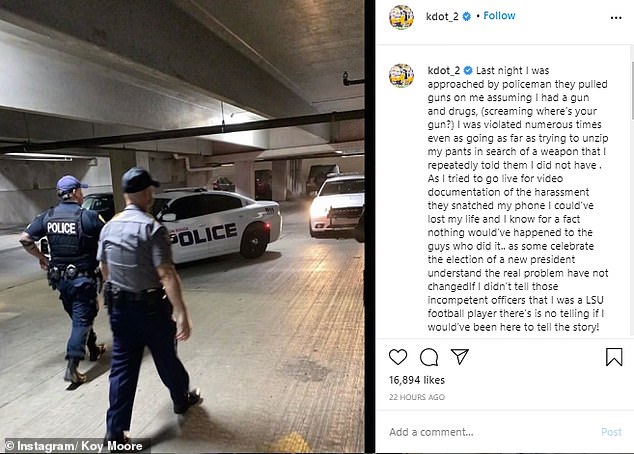 Everybody rushed in to pander to Moore and the black players on LSU’s football team, and the black community at large, following his accusations.

And then the whole thing went quiet. Until this week.

This week the police officers involved were cleared of any wrongdoing, though two of them did get a “letter of caution” for having used foul language in talking to Moore.

The three officers involved in an encounter with LSU football player Koy Moore that gained national attention have been cleared of any wrongdoing, the 9News Investigators have learned.

The Baton Rouge Police Department confirms a hearing did take place Wednesday, March 10 but when pressed about the outcome, a spokesman for the department chose not to elaborate on the case other than to say that it had concluded.

A source familiar with the case tells WAFB one of the officers was completely cleared of any wrongdoing at all and two of the officers were issued a letter of caution for the language used during the encounter.

Chris Stewart, executive director of the Louisiana Law Enforcement Association, said he is pleased with the outcome and says this is what he believed was going to happen all along.

“We’re definitely pleased about the outcome and we just wish things wouldn’t have been elevated to a certain level and this had been resolved and those officers’ due process was protected,” Stewart said.

Kyle Kershaw, the attorney for the Baton Rouge Police Union, released the following statement on the officers being cleared in the investigation:

“We are satisfied with the outcome in the disciplinary process. We are happy that Chief Paul was able to view the video evidence and see through Mr. Moore’s false allegations. We are hopeful that LSU will hold Mr. Moore accountable for violating the Code of Student Conduct and the resulting damage to the officers.”

So what actually happened? Just before 2 in the morning one night last November Moore and a friend were walking through a parking garage of an apartment complex on Chimes Street just off campus at LSU, with an eye toward getting into the friend’s car for a trip to find a late-night meal. A BRPD officer stopped them. Here’s why…

According to the brief report, officers were dispatched to 740 W Chimes St. around 1:46 a.m. on Sunday, Nov. 8. The call came in as a disturbance. The report states dispatch told the officers that according to the security guard, there were approximately 200 people on the roof of the parking garage having a large party and playing loud music.

Upon arrival, the officers say they patrolled the parking garage from the first floor to the roof, but were unable to locate any large party or gathering. In addition, they did not find anyone playing loud music or causing a disturbance. The report states the case was closed without incident.

The report does not mention anything about the alleged encounter with Moore. The student-athlete claims he was violated by the officers, saying they pulled guns on him and at some point, tried to unzip his pants to find a gun he claims he repeatedly told officers he did not have.

It remains unclear at what point during the search of the area officers allegedly came in contact with Moore. The report does suggest the audio and video from the situation is available. WAFB has requested body camera video of the encounter, but the legal division with BRPD said Tuesday afternoon (Nov. 9) that the body camera video is not available because the video is part of an open internal affairs investigation.

Somebody called in a false police report saying there was a loud, raucous party on the roof of that garage and the cops went in heavy to break it up. Which sounds like bad luck for Koy Moore to have gotten caught in that situation.

But the police review makes it sound like Moore’s recounting of the experience was not the actual truth. As in, he inflated it and blew it up to create an incident which shouldn’t have made any news. It’s a rite of passage for everyone, regardless of race, to get hassled by a cop at least once – whether for a traffic ticket or whatever. It isn’t the end of the world when that happens; life goes on.

Moore’s attorneys have essentially doubled down on his complaints, though their statements have a “doth protest too much” ring to them.

It’s hard to say whether Moore was pulling a drama queen act here, because the public hasn’t been shown the video.

The TV stations in Baton Rouge have been clamoring for it, but so far they’re getting nowhere. And this was the statement Baton Rouge’s mayor-president Sharon Weston Broome put out…

“From the beginning, Chief Murphy Paul has handled this issue with transparency and open communication, initially meeting with the LSU student, his mother and attorney to discuss their complaint.

The investigative process has concluded with BRPD and more details will be released by the department soon. The body cam video will show the complexities of the incident and the importance of open dialogue between the police department and the community after such an occurrence. The video will be available to the public as soon as possible in compliance with normal release procedures.

We should not be so quick to disregard the experiences of our citizens and their interactions with law enforcement, nor should we be inflexible in our views of these incidents. Closing the gap between law enforcement and the community, along with building a 21st Century Police Department means being intentional in our efforts to address public concerns, making appropriate policy changes when needed, and investing in our officers for their safety and well-being.”

Which is pure gobbledygook. If Murphy Paul, Broome’s hand-picked police chief, had any transparency about him he’d have released that video months ago and put the incident to bed.

Obviously the video doesn’t cast the cops in a very bad light, because if it did the cops wouldn’t have been cleared.

Does it cast Moore in a bad light? And is Moore being protected by the Powers That Be in Baton Rouge?

There’s a racial component to this, but of course the more specific issue is that Koy Moore is a wide receiver on LSU’s football team and he’s expected to emerge as a pretty good player this fall. Broome and Paul don’t want to be responsible for embarrassing the LSU football program, particularly when it’s as black and blue as it is right now given the sexual assault scandal which won’t go away.

If the video doesn’t show much of anything, of course, then it would be pretty obvious it would have come out by now.

The big issue here isn’t whether Koy Moore, who’s barely 18 years old and hasn’t the faintest idea what he’s doing in taking on the BRPD, is a drama queen or a fabulist. He had a negative interaction with a bunch of cops who’d been told they were heading into a contentious late-night disturbance where anything was possible, and he posted about it on social media at the height of the Black Lives Matter/racially polarized and politicized moment. Which was dumb, perhaps, but it’s clear the whole thing was overblown.

But the mayor and the police chief, who ought to know better and who have a professional responsibility to calm the racial seas in town, had an obligation to get this incident resolved and into the past. And they’re clearly refusing to do that.

Is it simple incompetence, or is there some other agenda at work? What the hell is going on with these people?