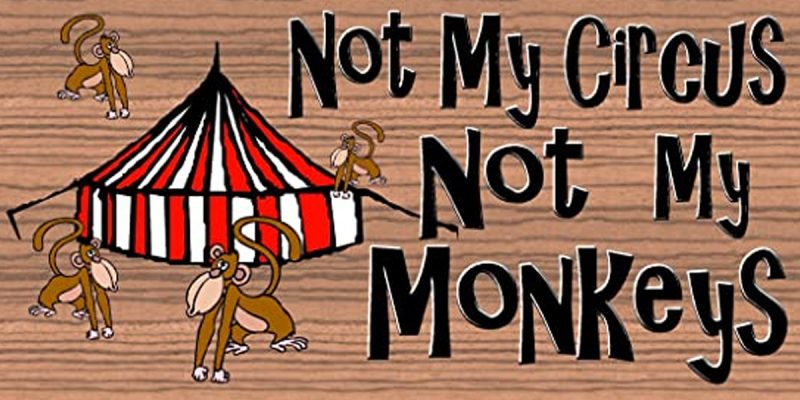 This is one of those instances where, as a conservative site, we ought to be reflexively defending the Republican legislative leadership against the leftist agitators of the NAACP who are harassing them in a purely hacktastic political lawsuit.

But we’re not doing that. This one? Not our circus and not our monkeys.

In case you missed this last week, here’s what’s going on…

Louisiana’s chapter of the NAACP filed a federal complaint Thursday against the organization that state Republican legislative leaders have created to promote their agenda, arguing the nonprofit is violating its tax-exempt status by regularly engaging in political activity.

Senate President Page Cortez and House Speaker Clay Schexnayder announced the launching of the organization called Leading Louisiana in May 2020. The nonprofit is registered as a 501 (c)(4) tax-exempt social welfare organization, a type of organization common called a “dark money” group because it doesn’t have to disclose its donors.

Under IRS regulations, the organizations can participate in politics if that’s not considered the group’s “primary activity.” The NAACP complaint argues that’s the main focus of Leading Louisiana, by endorsing candidates, touting Cortez and Schexnayder and planning involvement in the Legislature’s upcoming redistricting process.

Leading Louisiana “is concealing its donors and expenditures from public scrutiny while working to influence the outcome of elections in the short and long term,” attorney Evan Bergeron wrote in the complaint filed on behalf of NAACP Louisiana. The complaint also was sent to the Federal Elections Commission for review.

The organization — registered with the state as Leading Louisiana Forward — is run by Republican political consultant Lionel Rainey, who suggested the complaint was meritless.

“Leading Louisiana is an educational organization focused on supporting the policies of Senate President Page Cortez and Speaker Schexnayder as they lead Louisiana out of the COVID-19 economic crisis. We fully comply with all rules regarding primary purpose and limited political activities,” Rainey said in a statement.

Leading Louisiana changed its Facebook designation Thursday from “political organization” to “nonprofit organization” after the complaint was filed.

The NAACP complaint seeks an investigation of the organization and suggests it should be designated as a political action committee required to publicly disclose its contributors and spending.

“The people of Louisiana deserve to know who is paying for access to their public officials,” the complaint says.

The catalyst for this appears to be the fact that Leading Louisiana endorsed Julia Letlow for the 5th District congressional race, which would be something of a strange hill for the NAACP to die on. Letlow is going to win that race easily, probably without a runoff. There is a black Democrat in the race, Candi Christophe, but last year when she ran for that seat she came in third behind Luke Letlow and Lance Harris and missed the runoff.

Dark money groups are everywhere in politics now and they’re starting to show up in Louisiana. This Leading Louisiana outfit is a little like an attempt at forming an NRSC or NRCC for Louisiana’s state legislators, but that’s not universally acclaimed within their ranks.

Why? Because the Republican state legislative delegations have had that role for a long time. If you’ve ever heard of the Elephant Stomp, the big, swanky bash the GOP leges put on toward the end of every legislative session each spring, that’s a big fundraiser the delegations hold each year which allows them to help out their incumbents seeking re-election.

Blake Miguez is the House Republican Delegation chair. It wouldn’t be totally accurate to call Miguez an enemy of Schexnayder’s, but on the other hand Miguez was in the inner circle of Rep. Sherman Mack when the latter was running against Schexnayder for House Speaker a year and change ago, and Miguez has been a conservative critic of Schexnayder’s. Schexnayder and Miguez have been in a slow-boil fight over the delegation’s finances ever since. On the Senate side it’s similar, though not as pronounced, with Sharon Hewitt as the delegation chair in that body.

Rainey, the political consultant who has both Schexnayder and Cortez as his clients, is also the director of Leading Louisiana. Perhaps the defense to the NAACP’s lawsuit is that Leading Louisiana’s purpose isn’t to elect anybody but rather to pay Rainey.

Which sounds like a shot, but really it’s pretty much true.

When Leading Louisiana was founded, it went along with an economic recovery task force the two legislative leaders put together. That task force set about making a bunch of recommendations which didn’t really go anywhere, though those were the basis for a couple of special sessions Cortez and Schexnayder called – nothing happened with either one.

Meanwhile, Cortez and Schexnayder did zero to force the state’s economy back open after the better part of 2020 was spent in John Bel Edwards’ COVID lockdowns, and Schexnayder tried to hold secret constituent meetings to push back against public irritation with his lack of action. That blew up in his and Rainey’s faces when one of those meetings was recorded, and they’re both heard on tape saying the precise opposite of the legal position Schexnayder had to take when his own members forced him to support a petition to reopen the state.

Cortez ran away and hid on the entire question of a reopening petition; the Senate never participated.

That should have been the end of Leading Louisiana, and it should have signaled a significant rift between the House and Senate. It didn’t, because both Schexnayder and Cortez are Rainey’s clients and it’s his advice which is fueling this.

Then there’s the fact Rainey also has a contract with Franciscan Missionaries, the Catholic organization which runs Our Lady of the Lake Hospital in Baton Rouge and a few others around the state. OLOL had been a major voice for keeping Louisiana’s economy closed. There are lots of rumors among folks in the Legislature and at the Capitol which have it that Leading Louisiana landed a bunch of donations from the hospitals, and from lots of other special interests.

In other words, if you want to get the leadership of the Louisiana state legislature to push your bills or kill bills you don’t like, this would be the place to deposit your check and it’ll get taken care of.

At least, that’s how this organization is perceived by almost everybody at the Capitol we talk to. One of our correspondents remarked that there’s a reason nothing like this was ever done before, not even in the days when the John Alarios and Charlie DeWitts were oozing their way through the corridors of that building; even those guys weren’t this brazen.

So no, we aren’t going to take up for Cortez and Schexnayder over the NAACP’s lawsuit. It’s a blatant political attack, and it’s telling that what they’re complaining about is that Leading Louisiana is endorsing candidates rather than serving as a pay-for-play conduit (pay-for-play has never, ever bothered the NAACP), but the legislative leadership has asked for it.

Not our circus. And not our monkeys. You guys are on your own.