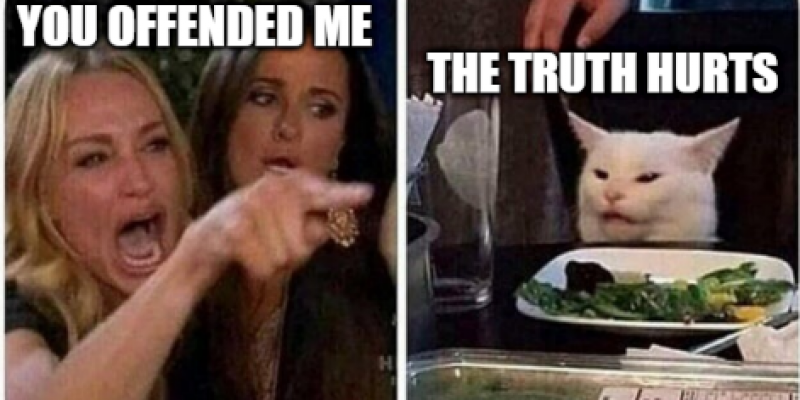 If you want to see actual fascism in the making, look at what happens to those that post the actual facts online.

We pointed the CDC publication from June 2020 where it states the dangers of prolonged mask wearing including the trapping of Carbon Dioxide.  We also  brought light to a Harvard University Study illustrating the cognitive loss caused by what amounts to very little CO2 concentration in the air.  Most recently we highlighted a Stanford University Study that confirms the adverse results of mask wearing from the previous two studies as well as the fact that all this information is being actively censored on big tech social media.

Developments like these are why there have been numerous legislative attempts at reining in social media. The major social media platforms have have become defacto town squares, especially in the age of COVID-induced social-distancing.  That a CDC study was buried in search algorithms (where it may be found using either heavily modifying the search parameters in Google or using an alternative search engine such as DuckDuckGo) underlines the issue at hand.

If Stanford gets censored, then what’s going to happen to any independent investigations outside of establishment academia?  Even Slate acknowledged that the origins of COVID coming from the Wuhan lab were buried for a year because Republicans including President Donald Trump were saying as much early in the pandemic.

It seems entirely political at this point regardless of what the actual science states. Even Bill Maher points this out.

President Trump did not go after Section 230 early in his first term: something that the RINOs in Congress stabbed him in the back for when he was a lame duck.  The social networks are using Section 230 to allow them to delete third party content from their users or outright ban them without incurring any liability. In Texas, state Sen. Bryan Hughes who also chairs the Senate State Affairs Committee filed SB12 which would prohibit social media companies from censoring those with opposing viewpoints.

Project Veritas’s James O’Keefe plans to sue Twitter on defamation grounds sidestepping Section 230, stating that Twitter is claiming he used multiple fake accounts and that his banning from the platform was in retribution for publishing videos exposing CNN officials manipulating information about the chaos in 2020 to be detrimental to Trump’s re-election bit.  These are the first steps of many that are being taken to reign in the active censorship that is happening online.

[For the sake of objectivity, mention views to the contrary, that the market is SLOWLY developing an alternative to AWS and Google, e.g. Parler. That in time, government would not have to act so long as the Internet itself remains truly neutral.]

When it is all said and done, the political debate is far beyond the virus at this point.  It’s about social control.  It makes many question the origin of the virus in the first place and the fact that Dr. Anthony Fauci is doubling down on his narrative regardless how inline it is with actual science or not.

Republican lawmakers are finally growing spines and openly criticizing Fauci before Congress, stating that he is moving the goal posts for seemingly political reasons. It can’t just be U.S. Sens. Rand Paul or Ted Cruz fighting this battle.  The pandemic has caused a global economic collapse, commodities shortage from microchips to ketchup, and caused social unrest that has directly affected U.S. elections as well as current occupants of the White House (who probably are not dealing with a full deck of cards mentally speaking — the masks aren’t helping. Perhaps this is why Joe Biden seems to be leading us into a hot war with Russia).

Whether one takes a free market stance on Big Tech censorship or you agree legislation (such as SB 12 in Texas) is necessary to protect conservative viewpoints, reforming Section 230 is a must.  Without the free-flow of information we will no longer be living in a free society — let alone a free republic that still adheres to the First Amendment.

Interested in more news from Texas? We've got you covered! See More Texas News
Previous Article APPEL: Bring On The Revolution, Louisiana!
Next Article What Does It Mean To Have An “Independent” Legislature?