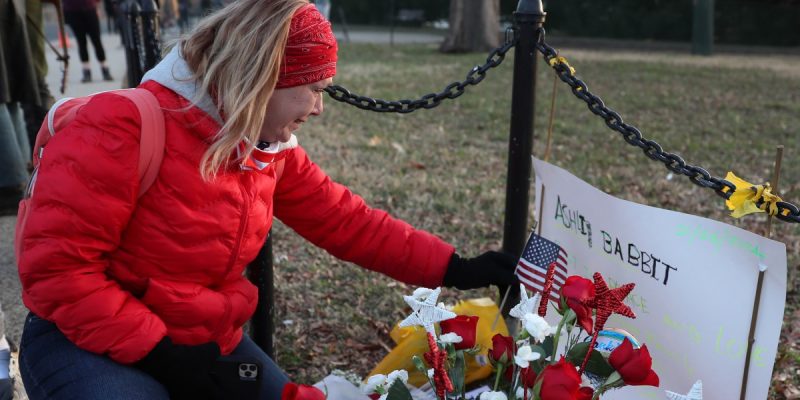 On January 6, decorated U.S. Air Force veteran Ashli Babbitt was killed by a U.S. Capitol Police officer. She was among the crowd of protesters who entered the U.S. Capitol and was shot as she attempted to climb through a broken door outside the Speaker’s lobby, an area that leads to the House Chamber.

Babbitt was unarmed and should not have been considered a threat by police officers. She was not a convicted criminal, in fact, she was a military hero. Babbitt served in the U.S. Air Force for over 12 years in various capacities. She deployed to both Iraq and Afghanistan, as well as to the United Arab Emirates twice. Babbitt received medals for her service in the Iraq Campaign and the Global War on Terrorism.

Last week, the Department of Justice announced that the officer who killed Babbitt would not be charged in her death. While this officer was being exonerated, Kim Potter, a 26-year veteran of the Brooklyn Center, Minnesota police force, was charged after she mistakenly shot and killed Daunte Wright, a 20-year-old with a criminal record.

Potter, along with two other officers, pulled over Wright’s car because of an expired license plate. Once the officers determined that Wright was also wanted on an outstanding warrant, they attempted to arrest him. At that point, Wright resisted arrest, reentered the vehicle, and attempted to leave the scene. Attempting to stop Wright, Potter yelled “Taser,” and shot him. Sadly, she used her weapon by mistake, tragically killing him.

Wright’s troubles with the law started in December of 2019 when he was arrested for an aggravated armed robbery attempt. At that time, Wright reportedly pulled a gun on a woman and demanded $820 in cash. When she resisted, he allegedly choked her and tried to take her money. She started screaming as Wright choked her again. Eventually, Wright and an accomplice left without taking the money.

After being identified by the victim, Wright was arrested and released on $100,000 bail. It was revoked in July of 2020 when he violated the terms by possessing a fireman and losing contact with his probation officer.  Clearly, when Wright was pulled over by the officers, he knew he would be going to prison, so he tried to flee the scene.

Potter was charged with second-degree manslaughter and resigned from the police force after being put on administrative leave. In her letter of resignation, she said that “loved every minute of being a police officer and serving this community to the best of my ability.”

The death of Wright was considered an accident by former Brooklyn Center Police Chief Tim Gannon. He was forced to resign last week after claiming that Potter “had the intention to deploy” her Taser but mistakenly “shot Mr. Wright with a single bullet.” According to Gannon, the fatal shooting appeared to be “an accidental discharge,”

After being arrested, Potter was released after posting a $100,000 bond. If convicted, she faces a maximum sentence of ten years in prison. Her life will never be the same and her 26-year record as a police officer will be completely disregarded. The mistaken shooting has led to protests throughout the country and calls for Potter to be convicted.

The issue of race is often considered when the victim is African American, and the officer is white. When the roles are reversed, it seems to receive almost no attention from the media.

The officer who killed Babbitt has not been identified. He is being protected by the Department of Justice, which decided not to charge him in Babbitt’s death. According to federal prosecutors there was “insufficient evidence” to prove that Babbitt’s “civil rights were violated.” Prosecutors also stated that the unidentified officer’s actions were “reasonable.” However, was it “reasonable” to shoot Babbitt, a small woman, could have easily been stopped with a Taser? Why did the officer use his weapon to shoot an unarmed woman?

While Potter has been charged and is no longer a police officer, the U.S. Capitol Police officer has returned to his job after being placed on administrative leave. He has been totally cleared of wrongdoing and has faced limited backlash for his questionable actions.

Why the difference in how these two cases were handled? Some believe it is another example of the double standard of justice that exists in our country today. While Republicans and conservatives, such as Roger Stone, former Lt. General Michael Flynn, and many other associates of former President Donald Trump have faced severe consequences for their actions, Democrats are often unpunished.

The list of Democrats who have received lenient treatment from the Department of Justice include Hillary Clinton and all of those involved in the Russian collusion hoax. The lackluster “Durham” investigation into this matter has been ongoing for years and has produced almost nothing of value.

Recently, it was discovered that the FBI took possession of Hunter Biden’s laptop in December of 2019. In the last 16 months, despite the scandalous material on the laptop and the sordid allegations against him, there have been no charges filed against Biden and no update on the status of that investigation.

While the FBI has vigorously pursued those involved in the breach of security of the U.S. Capitol on January 6, there has been little enthusiasm to prosecute those left-wing agitators involved in the 275 riots last summer or the ones participating in the ongoing riots in Portland, Minneapolis, and many other cities.

The FBI Director claimed he is investigating Antifa, but the organizers and main benefactors of that terrorist organization have not been brought to justice.

This leads many to conclude that American justice is no longer blind. It can see, but only conservatives.