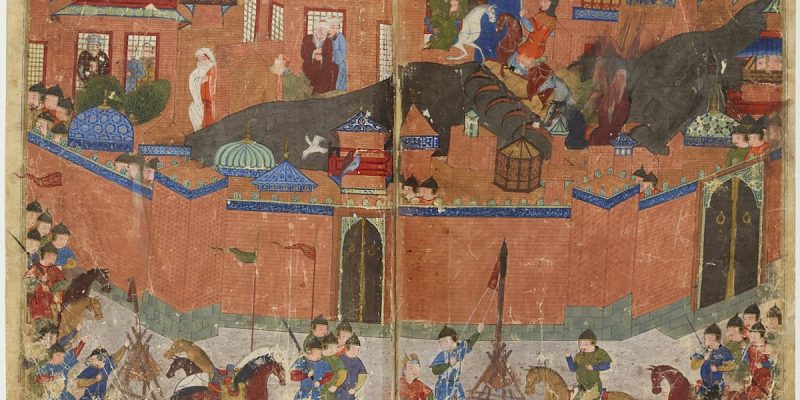 This is from last night’s episode of Tucker Carlson Tonight, and it’s a discussion he has with Mark Steyn about the video clip at the beginning of the segment, in which Alexandra Ocasio-Cortez was speaking at one of the Green New Deal extravaganzas this week. She espoused the moronic opinion that climate change is racism against indigenous people.

Carlson and Steyn are correct about this idiocy and the abject lack of factual basis behind it, of course, and Carlson makes an excellent point that as the ability to deliver persuasive arguments based on objective truth continues to be devalued by imbeciles like AOC being given prominent platforms to spout inanities we’re moving toward the point where the Right is incentivized to fight fire with fire.

But rather than go there, I’ll suggest something a bit more sophisticated – with the special benefit that it happens to be objectively true. A quick segment from my American Spectator column of this morning…

Thursday in his Insanity Wrap at PJ Media, the excellent Stephen Green, who’s known as Vodkapundit, posted this:

Is there a single Leftist cause, just one — Insanity Wrap is asking this question without snark or rancor — that isn’t at its most basic level nothing more than a justification for theft or vandalism?

Just so. Just so.

In a future column I’ll have to expand on this, but the Left loves to cast the world in different iterations of the grifter John Edwards’ “Two Americas” narrative: oppressor and oppressed. That formulation is the basis of Marxist thought, and it’s absolutely the basis of cultural Marxism and critical theory.

But the real binary divide isn’t oppressor and oppressed. It’s those who make money and those who steal it.

It’s the villagers raising crops and making things they can sell, and the Mongol or Hun horsemen who come to sack the village.

You can’t get away with sacking villages anymore — well, OK, you can in places like Seattle and Portland and Minneapolis — but if you’re willing to be a little more sophisticated, there are still ample opportunities to have at those villagers and take all their stuff. And as Stephen accurately recognizes, accessing those opportunities is the essence of American leftism.

Everything about the Left’s climate change narrative is a grift. It isn’t even a well-disguised grift. They’re taking slight increases in trace gases in the Earth’s atmosphere, and temperature changes which are almost certainly 100 percent due to fluctuations in the levels of solar radiation hitting the planet, as urgent imperatives to do…what?

And when the scientific and economic case for that buffoonery can’t be made, they double down by attempting to attach racism to the equation when it clearly has zero relationship.

Keep your grifts separate, gang. Do us at least that small favor.

I’ve said the Democrat Party is a party by and for people incapable of doing a proper job at honest work. Another way to say it is these people are the modern-day equivalent to those Mongol hordes who lit afire everything from Peking to Baghdad in the greatest mass theft in world history. Arrows and torches aren’t the best of weapons against the modern villagers, though they may do passably in a Ferguson or Watts; instead it’s the Green New Deal and slavery reparations and Ben Crump’s never-ending race hustling.

They’re thieves. And no matter how sophisticated they are, it all comes down to the same basic thing: aggressively grasping for that which they haven’t earned.

That they’ve put forth the Greta Thunbergs and AOC’s to shill for the grift only shows how desperate they’re becoming. Which, as depressing as all of this is, is actually a hopeful sign.

Interested in more national news? We've got you covered! See More National News
Previous Article SADOW: LSU’s Manship News Service Botches Its Renewable Energy Story
Next Article How Did A $15 Minimum Wage Bill Get Out Of A Majority-GOP Committee?