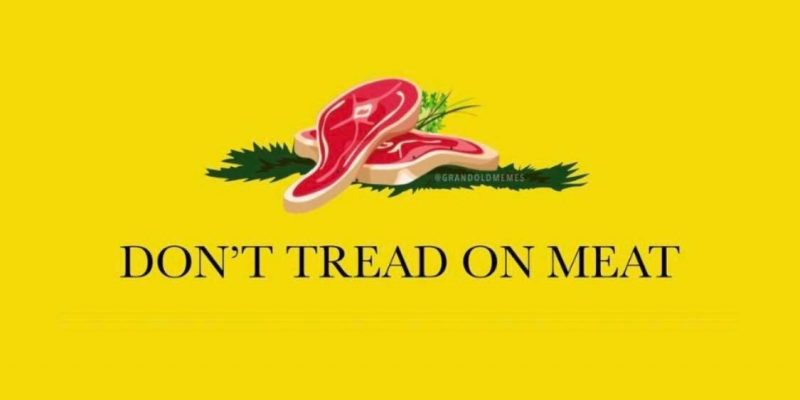 All over social media, Biden’s proposal to enact the meat reduction component of the Green New Deal  based on a University of Michigan Study has been met with practically universal opposition.

For those unfamiliar with the Green New Deal, its a series of radical proposals put forward by the Democrats that feel are necessary to stop climate change.   When it was first posted on the internet people thought it was a joke, especially the part about eliminating farting cows.    Their claim is the methane emissions for cows is a huge contributor to greenhouse gasses, but the reality is they are not.  Also these emissions would happen anyway through plant decomposition regardless if the cows consumed them or not.  Sadly those that are proposing this nonsense actually believe it’s good for the planet.

Leftist views on eliminating meat, specifically ground beef used for burgers goes back to the early 1990s where one example pushed in the culture war was a sub-plot for an episode of the short lived NBC sci-fi series Seaquest.  The first season of the show which aired in 1993 took place in what was to be an envisioned 2018 where a UN like entity called the United Earth Oceans manages The Planet’s Navy to which the Seaquest was one of its largest research submarines.  Many progressive themes were pushed in the show including extreme environmentalism, that includes making ground beef illegal and that cheeseburgers became contraband.

Flash forward today and it would seem that the Biden/Harris Administration is putting forward proposals that would make that fantasy into reality.  The same time that info of the Biden Tax Plan was leaked which would raise the top tax bracket to 43%, Sen. Ted Cruz tweeted out the details of Biden’s plan to enact Green New Deal in that it would cost $93 trillion or $600 thousand per household.  It also called for  90% reduction in meat intake down to the consumption of only 4 pounds of meat per year or the equivalent of 1 cheeseburger per month.  This along with court packing was denied by the left before the election but of course they were lying about their true intentions.

To put this into perspective the Big Texan Steak Challenge in Amarillo is 4.5 pounds.  That’s just the beef and not including the shrimp cocktail.  So if you attempted the challenge you would be over your yearly Biden/Harris meat quota.    Likewise say goodbye to buy one get one offers from Burger King and McDonalds, if they even survive the economic carnage at all.  Reducing meat consumption 90% and thus reducing meat production 90% would make meat cultivation economically unviable as well as devastate the economy.  In Texas for example meat production is the third largest economic generator for the state adding $12 billion to the economy in 2015.  Nationally The meat packing industry alone employees half a million people.  That does not including the farmers as well as the service industry employees.  If you factor in that most of the 15.1 million restaurants employees work at meat serving establishments as well as the ranchers the 700,000 cattle farms would also be out of a job as well.   It could also be a way for the Democrats to ram Universal Basic Income down our collective throats.

This 90% reduction of the economy of scale would make meat production economically unsustainable unless it becomes a luxury product that only the wealthy could afford.  It sure seems that this is just another attempt by the left to eliminate the middle class lifestyle for Middle America, trying to dictating what you can eat, even on the 4th of July  through economics or otherwise.

What about the plant based synthetic meat alternatives?  They have much to be desired.  This author has tried both plant based meat substitutes from from Impossible Foods and Beyond Meats.  Both have weird aftertastes as well odd textures.  Synthetic meat also not good for your health according to Whole Food founder John Mackey.  They are loaded with Sodium and Soy.  Soy in particular increases the estrogen to testosterone ratio and could be a contributing factor in feminizing biological males.

The lefts war on meat is should no longer be considered a joke.  Their plan not only wrecks the economy by implementing overbearing regulations that will destroy a foundational industry, but also dictates how we live our lives.  Seriously other than vegans who goes out to eat at a place that does not serve meat?  This war on meat goes against the principals of our founding father and into the doctrine that people that lived under the Iron Curtain had to endure.  It also goes against our biology.  Humans are omnivores in that we need to eat fruits, vegetables and meat.  Our brains needed a healthy dose of animal protein in order to evolve into what it is today.  Also a plant based diet could lead to a carbohydrate protein imbalance. 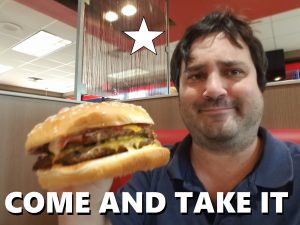 There’s nothing more America than a cheeseburger,  even more so than apple pie.  There’s also nothing more American than eating whatever you want, whenever you want.  It’s not like we didn’t warn you before the election this would happen.  Looking forward, to 2022 and beyond keep that in mind.  If no one votes for these communists then it will be a lot harder form them to convincingly commit voter fraud to steal more elections.  If The Founding Fathers of Texas were around today I’m sure they would say,  If you don’t want me to eat meat, come and take it.