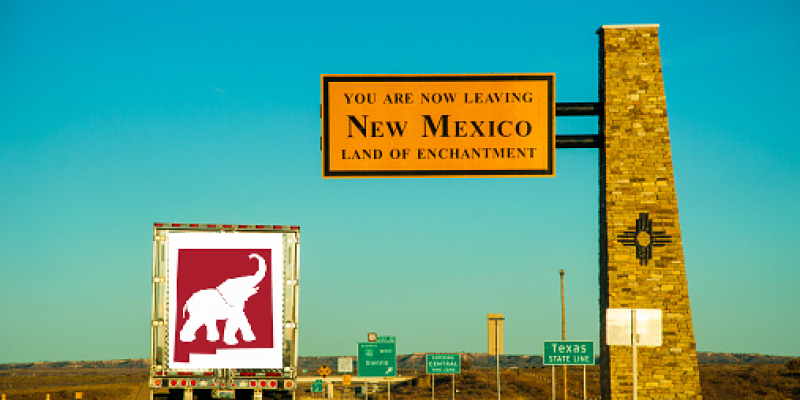 The Hayride will routinely comment on the Texodus phenomena from Louisiana to the Lone Star State — the result of bad policy in the Pelican State effectively telling wealth and prosperity to take a hike and head west.

Texas has been the beneficiary of some of the best and brightest having left for a freer economic climate. And now it’s happening clear on the other side of Texas, as the most stringent COVID-19 restrictions in the nation has New Mexico Republicans packing their trunks for friendlier turf.

But they’re not giving up the fight and writing G.T.T. on their windows: They’re only moving to Texas for their annual state convention to rally the fight against an increasingly liberal regime in the “Land of Enchantment.”

The three-day convention, “Operation Freedom,” is scheduled for Amarillo May 14-16, featuring U.S. Rep. Jim Jordan of Ohio and South Dakota Gov. Kristi Noem — both of whom have been critical of mask mandates, lockdowns, and other attempts at restricting people movement.

According to the Las Cruces Sun-News, the state of New Mexico restricts gatherings to 150 people. The convention hotel is only requiring a mask be worn. The Sun-News reported the convention is expected to bring $346,000 to the Amarillo area economy, drawing in around 450 attendees at $250 per person for a ticket plus expenses.

Making this micro-Texodus possible: Texas Gov. Greg Abbott issued an executive order on Texas Independence Day, March 2, repealing several of his previous COVID-19 orders, rescinding the statewide mask mandate, and ensuring that no business be restricted to under 50% capacity, among other changes.

From the hip: Abbott’s order, which he billed as “opening up Texas 100%” was a welcome sigh of relief for business owners, though the courts recently ruled that cities and counties may continue to enforce mask mandates and other limitations. Read here for the complere order and our analysis. Others argued it did not go far enough, pointing to Florida Gov. Ron DeSantis‘s reticence to approve of any restrictions in the Sunshine State.

Amarillo is no longer an area of high hospitalization for COVID-19, according to criteria from the Texas Department of State Health Services for continuing capacity limits. But Abbott’s order left intact an early order that requires everyone to wear a face covering over the nose and mouth in public spaces in counties with 20 or more positive COVID-19 cases, and with few exceptions, according to a press release from the city of Amarillo.

There are many small towns in the Texas Panhandle and near New Mexico that do not have such restrictions.  Drive through the Panhandle and make a few small-town stops and you’ll almost forget about COVID closures while you’re there. But finding a city with enough hotel space and entertainment options is the key to any successful convention, even for a small state political rally.

Amarillo will do for now, and is a downright libertarian paradise compared to what’s going on to the west.