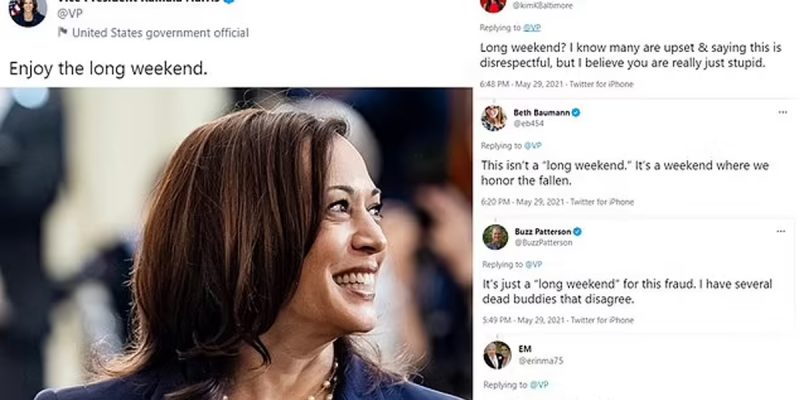 The social media posts features an image of Mrs. Harris smugly grinning while looking aside with the words “Enjoy the long weekend.”

Beyond the vain glamour shot of Mrs. Harris putting the ME in Memorial Day weekend, which is in itself a classless gesture, the description of Memorial Day, arguably our nation’s most sacred secular holiday, as little more than a state-sanctioned vacation day is setting the bar at tripwire level in terms of appropriateness.

I can understand that some people associate Memorial Day as being a three day weekend and a kick off to summer vacation.

Those individuals are generally known as juveniles and not Madame Vice President.

Over at 1600 Pennsylvania the man she once accused of oppressing her as a school girl had his Aviator covered eyes on another schoolgirl and offering his own light take on weekend plans.

There’s the president in a suit wearing shades standing at an ice cream parlor while holding a waffle cone looking like he’s picking up on a casually dressed teenage girl advising folks “to keep cool.”

I’m not going to write out the brief yet profane rhetorical question I blurted out upon seeing this image.

If Kamala was doubling down on obnoxiousness there was “Cool Joe” posing as meme bait and looking like this week’s featured creeper on “To Catch a Predator.”

If this man gets any weirder they’re going to need to send out orange warning postcards to residences along his limo routes.

These are the leaders of our country and there they are literally striving to resemble the criticisms they hurled at Donald Trump’s behavior.

Yes both later issued meandering tweets touting the valor and heroism of the fallen after the swift and pronounced backlash but why should these allegedly empathetic and experienced pair muff up their opening Memorial Day weekend social media messaging?

Are their communications managers that immature to pursue this opportunity to offend so many people?

We should expect better of both our national leaders and their staffers charged with the task of “virtually” representing them.

But to dwell on the ultimate  sacrifice of hundreds of thousands of men and women who perished not for personal gain or national conquest but more altruistic ideals such as liberty at home and abroad, patriotism, freedom, and stopping genocide would imply America’s greatness.

And in an Orwellian twisting of words and meaning, celebrating American greatness is now the equivalent of sedition.

If in this woke day and hypersensitive age the general homogenous complexion of those who stormed and died on the beaches of Normandy makes the current prevailing politicos feel uncomfortable perhaps they can summon up the stomach to at least recognize Civil War heroism in Louisiana.

Days before the famed black Massachusetts 54th infantry regiment attempted to take Fort Wagner in South Carolina, which was immortalized artistically in both a bronze relief outside of Boston Common and later in the motion picture Glory, another black regiment made history just north of Baton Rouge.

You can walk over the still visible trenches of Port Hudson, where the Louisiana Native Guards, an all black regiment consisting of both free men of color and the formerly enslaved wearing the blue uniform of the United States Army, gallantly battled the stubborn Confederates defending the southern extent of the Mississippi River still in rebel hands.

Just downriver is the national cemetery where many of these soldiers are interred not far from where they fell in fierce hand to hand fighting.

But why talk about something meaningful and historically important when you can message signal like a DMV worker staring at a punch clock or musing aloud about the weather with a young girl while licking an ice cream cone.

Biden and Harris are not just trolling conservatives anymore.

This country does not deserve such arrogant stewards and those who died to extend the life of this nation merited better beneficiaries.

Come 2025 I hope they “keep cool” and “enjoy” their three day Memorial holiday weekend out of office.