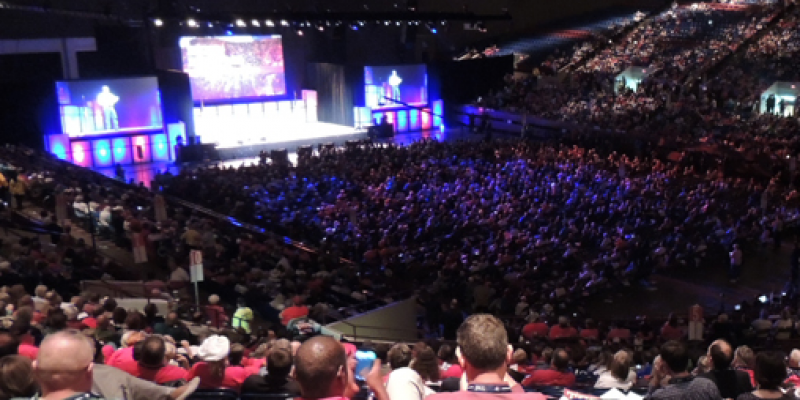 In what appears to be a shot across the bow from the Texas Legislature, a last-minute amendment was added in the wee hours on Sunday to take away Republican state convention delegates’ power to select their own chairman and executive committee members.

HB 1987 was originally intended as a resign-to-run law to prevent state chairman candidates from running for one balloted office while holding another — as is already the case for county chairmen and precinct chairmen.

Critics assailed it as an attempt to stop Texas GOP Chairman Allen West from seeking another office. The legislation was amended by the Texas Senate, which then gave the bill two courses of survival going into the last day for the House to concur on Senate-amended bills: go to what is known as a conference committee and have each chamber hash out the differences (and then each chamber sign off on the report) or the House simply concurs on the Senate amendments.

The conference committee route was chosen, and its report was released early on Sunday. The report contained an unexpected proviso: that Republican (not Democratic) candidates for state Chairman and state Executive Committee file for placement on the primary ballot and that those positions be chosen by primary voters (not convention delegates as is the current practice).

Once the haze of a floor session that lasted until nearly 7 a.m. finally cleared, activists got the word out to fellow conservatives who were sleeping in, or perhaps getting ready for church services or had Memorial Day weekend plans. A steady trickle of phone calls were made to state legislative offices, particularly the conferees (see list below).

Needless to say the Texas GOP had words, calling the move “unconscionable.”

Around 7 p.m., the conference committee report was scrapped and the House concurred on the Senate amendments on HB 1987.

From the hip: This was a strange, legally questionable amendment to a conference committee report at the last possible minute when the least amount of eyes would notice.

The House conferees are close to the Speaker and probably didn’t cotton well to the Texas GOP’s opposition to Speaker Dade Phelan and frequent critiques over what House leadership has billed as “the most conservative session” ever.

We doubt the amendment’s targeting of one party over the other would have passed judicial muster. And we’re fairly certain the Texas GOP and SREC (State Republican Executive Committee) would have reacted with discussions of either a closed primary or a caucus (currently, the Lone Star State has open primaries), and perhaps even a workaround plan to remove power from the Chairman and SREC and give it to other, party-selected offices.

So we highly doubt this was a carefully targeted and artfully crafted legislative move designed to reform (or rein in) the Grand Ol’ Party in Texas. Rather, it seems to be a not-so-friendly reminder on part of Legislative leadership that there are two levels of party authority: administrative heads of the party (e.g. the Governor, Lieutenant Governor, House Speaker, caucus chairmen, etc.) and those elected by the grassroots at convention (Chairman, SREC, etc.).

In sum: the Republican administration flexed.