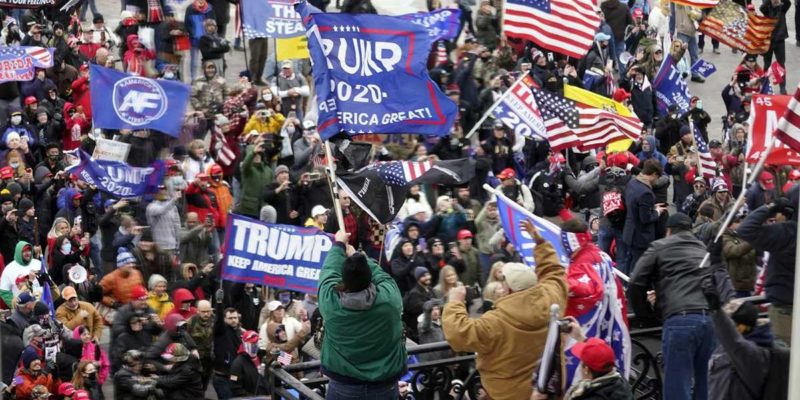 On January 6, 2021, a massive outpouring of supporters of President Donald Trump descended on Washington D.C. for a rally. The President invited his supporters to “peacefully and patriotically make your voices heard” at the U.S. Capitol. It did not matter that he did not call for violence, Congress impeached him anyway.

Instead of the day being focused on claims of voter fraud and election irregularities, the entire media narrative turned into the “attack on the U.S. Capitol.” The images of some in the crowd battling U.S. Capitol Police officers were aired constantly, as were the photos of some flag waving Trump supporters in the building posing for pictures on the U.S. Senate floor or in House Speaker Nancy Pelosi’s office.

No violent actions can be condoned and all who engaged in criminal behavior should be prosecuted to the fullest extent of the law. In the aftermath of this security breach, the FBI arrested hundreds of people for various offenses and is continuing to investigate.

While these individuals are being arrested and prosecuted, scores of violent criminals involved in approximately 275 Antifa and Black Lives Matter riots last summer have escaped justice. It seems there is more of an FBI focus on bringing Trump supporters to justice than those criminals who burned, looted, and robbed during a summer of discontent in the wake of George Floyd’s death.

It has been over four months since the January 6th protests and the liberal media cannot stop discussing it on their cable news programs. It serves as a perfect distraction from covering the disaster known as the Biden administration. Immediately after his inauguration, President Joe Biden began issuing executive orders and supporting policies that can be accurately described as socialism on steroids.

The results are both calamitous and predictable. Biden has created a souring economy, rising gasoline prices, the resurgence of inflation, a border catastrophe, and a new Middle East conflict. His decision to stop construction of the border wall looks worse every day the flood of illegal immigrants continues.

The left-wing media do not care about these inconsistencies or the horrible situation Biden is creating. Thus, they are conveniently ignoring the negative reports about the President and focusing on January 6th and the “insurrection” because of their overwhelming hatred for Trump and his supporters.

According to the left, the actions of January 6th were akin to 9/11 and Pearl Harbor combined. In those attacks on our country, thousands of people died; however, after this protest, five people died, including four of natural causes. The only person killed was an unarmed Trump supporter, Ashli Babbitt, who was shot dead by a U.S. Capitol Police officer.

Last week, the U.S. House of Representatives approved the formation of a commission to investigate the activities on January 6th. Sadly, 35 House Republicans joined Democrats in supporting this sham investigation.

U.S. Senator Marco Rubio (R-FL) called the commission “a partisan political weapon.” He noted that while the members will be evenly split among Democrats and Republicans, “the chairman of this commission has the power to hire all the senior staff and has special powers to overrule decisions made by the other side and the vice-chair. This is a partisan joke.” Rubio believes the true purpose of the commission is for Democrats to keep “the House majority in 2022” and to keep “this (January 6th) in the headlines.”

Rubio is right, this commission is not about justice, it is about politics. The legislation will advance to the U.S. Senate where it will be considered. If this is eventually approved by the U.S. Senate and becomes law, a formal commission will be created.

At that point, Republicans should try to make the best of the situation by demanding the following questions be answered:

2)    Why did the Department of Justice decide to forgo charges against this police officer and why has his identity been kept secret? It was announced this week that Ashli Babbitt’s family has filed a $10 million lawsuit against the U.S. Capitol Police. According to their attorney, Terrell Roberts III, there has been “zero accountability.” He said the family has been given “no explanation to justify the shooting and they do not even identify the officer. That is what they do in autocratic countries, not in the United States.”

3)    Why was there a false story about the death of U.S. Capitol Police officer Brian Sicknick? It was initially reported that he was killed by a Trump supporter, who threw a fire extinguisher at him.

4)    Why did it take so long for the medical examiner’s report to be made public?

5)    Why was security so lacking at the U.S. Capitol when there were multiple reports about a large crowd expected?

6)    How many police officers actually allowed protesters to enter the building?

7)    How many Antifa and other leftist agitators were mixed in with the Trump supporters causing mayhem and encouraging the crowd to commit violence?

A genuine commission would be designed to uncover the truth, but in this case, the only goal is to punish President Trump and his supporters so thoroughly that the “America First” agenda is permanently destroyed.