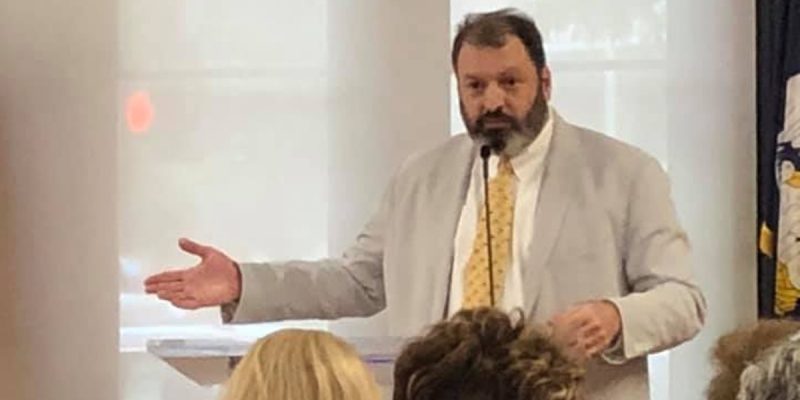 Editor’s Note: Last night at LABI headquarters in downtown Baton Rouge, we managed to pull off a Hayride event for the first time in 15 months. It was a lot of fun and we’d like to thank everybody who participated.

To give just a taste of the festivities, here’s the written copy of my remarks last night. The speech didn’t go off word-for-word as written, but it was close enough.

Hey everybody! Welcome to the Hayride’s Comeback Spectacular!

It’s the first time we’ve been able to do an event since February of last year, on account of something I’m sure you’re all pretty aware of. Everybody asks these days, “How are you doing?” and I do something terrible, I guess, which is to say “Recovering from COVID.”

And I get these alarmed, sympathetic looks before I say “economically, I mean.”

And then sometimes the looks get even more sympathetic, because as we all know this pandemic, and the response to it, has meant all kinds of things to different people. And certainly for those of us who have lost friends and family members it’s meant everything.

But this, as you’ve no doubt noticed, is LABI’s headquarters. And so it’s appropriate to note the economic effects of everything that happened last year – and the effects of our leadership, both in the governor’s mansion and the White House. Those of us who tend toward the capitalist point of view don’t seem to have a lot of friends in high places at the moment.

And noting that in things I’ve written at the Hayride and the American Spectator, plus what I’ve talked about at the Post-Republic Podcast which some of you have found at The Speakeasy and I’ll invite the rest of you to sign on and check out every Tuesday and Thursday afternoon, I’ve been credibly accused of being a bit gloomy lately.

Which is fair. But I’m not going to be gloomy tonight. Tonight I’m optimistic about the future. We’re calling this the Comeback Spectacular, and that’s not just because we’re back doing events again. I think Ordinary America is about to make a big comeback, too, and I know I’m not alone.

I talk to a fair number of pollsters, political consultants and other such folks as part of the day-to-day grind at The Hayride and the American Spectator, and I’ve been noticing that the Republican ones are gaining some pep in their step over the last few weeks. One guy in particular told me a week ago that he thinks 2022 is going to be the best cycle he’s seen. Not since 2010, not since 1994, since he got into the business in the early 1980’s.

He said he thinks a big wave election is coming.

He said he sees four issues out there, any one of which would by itself be enough to fuel a wave. But all four of them are not only surfacing, or have fully surfaced, but the Democrats seem totally committed to keeping them alive or even making them hotter by next fall.

I’ll go into them briefly in a minute, but it’s pretty obvious next year should be a good election for those of us in the center and on the right no matter what.

After all, every president has trouble holding Congressional seats and down-ballot races in that first mid-term election cycle. 2010 and 1994 were first midterms. So was 2018, obviously. 2002 probably would have been another one had it not been for 9/11.

And these approval numbers notwithstanding, Joe Biden is hardly the strong, charismatic, energetic leader who’s going to buck that trend. He’s a better friend to the GOP than practically anybody in the GOP, and it’s hard to see that not playing out.

The comeback is going to come. What happens between now and then probably ought to scare the heck out of you, but we’ll just have to survive it. Then the comeback will come.

But I wrote a thing at The American Spectator back in March and I want to touch on it a little here, because it’s relevant to the comeback.

Historically, there are lots of parallels to the late 1970’s right now. We got a taste of that when that pipeline was hacked and gas lines popped up around the East Coast, and we’re seeing it in the inflation numbers. I think of this year a bit like it’s 1977 and the 1978 midterm is coming. If you’ll recall, there was a pretty big tax revolt that happened in 1978 around the country. And there was a pretty unsuccessful Democrat president.

When you start seeing disco make a comeback, look out.

The late 1970’s begat 1980 and Ronald Reagan, and with Reagan we got the famous “three-legged stool” which defined conservatism for four decades. It’s a little obsolete these days, but it served us, and the country, awfully well.

What I wrote was what might be a bit of a successor to the three-legged stool. I haven’t given it a name, but it has five elements. They’re a little bit relatable to Reagan’s triad – which for those of you who don’t remember were fighting and winning the Cold War, supply-side and free-market economics and social/cultural conservatism.

These are a little more timely, and I wouldn’t say they’ll last for 40 years. But if the center-right grabs them and uses them, they’ll fuel the comeback.

First,  resisting China and its rise as the single largest threat to human liberty on the planet.

It’s the biggest deal there is, as you know. We’re finally, FINALLY getting around to the public recognition that the Wuhan virus came from the Wuhan Institute of Virology, and that this obvious conclusion has been denied for so long is a testament to the fact that the Chinese communists have penetrated awfully deeply into American politics. The Biden administration just shut down an investigation into the source of the virus, at the same time people like Anthony Fauci are grudgingly admitting this pandemic probably didn’t come from a bat.

If you saw John Cena apologizing, in Chinese, for calling Taiwan a country yesterday, you’ll know China is a problem. It’s time to stop seeing that regime as some sort of economic partner or even a rival. They’re an adversary if not an enemy. And we need to copy a bit of Reagan’s framework, which is this: we win, they lose.

This gets me to the first of the issues my consultant buddy said was a wavemaker. He said this business with Biden and the border and the administration’s clear refusal to do a damn thing about it has people absolutely steamed. And they should be. A tenfold increase in illegals caught at the border from April 2020 to last month is outright ridiculous, and it’s obvious Biden’s policy and politics is what’s driving it.

For a long time the Right didn’t care about illegal immigration and just acted like it was a fact of life. Give Trump credit for slamming on the brakes on that. When immigration went down, the standard of living for the average American and especially the working class went up. That’s good politics and it’s good economics, because you always want just a little bit of a labor shortage – it makes for rising wages, it makes companies willing to invest in the skills of their employees and it also drives technology to fuel productivity.

After watching the fit Corporate America threw over Georgia’s election reform bill, it’s all of a sudden a relief that Louisiana doesn’t have a bunch of corporate headquarters, right?

Look, I have to live my life online doing what I do. And I can tell you that between Google, Amazon, Facebook and Twitter it’s nothing short of rough out there. Those guys aren’t just hostile to conservatives, they’re hostile to small business. Amazon has pretty much declared war on the little guy.

And if you don’t believe that, think about the fact that they’ve got Jay Carney, the old Obama press flack, pushing their national lobbying demands for a $15 minimum wage. That isn’t just left-wing politics, it’s worse than that. Amazon knows that mom and pop retailers can’t pay their employees $15 an hour, and if that were ever to be law then it’s just more market share for Amazon, isn’t it?

We’re past the point where we can just take a libertarian view about all of this. We’ve actually got to channel our inner Teddy Roosevelt at this point. Especially if it’s going to be Woke Corporate America for the next hot minute.

Of course, we still need to be the party of opportunity and work, which plays awfully well with another one of my buddy’s big four issues. He says this business of Biden paying people not to work is just poison for the Democrats, and that’s only going to get worse. We don’t have to become Socialist Lite here – we’re defending the free market against corporate tyranny as well as the government kind.

Then there’s rolling back the political and legal corruption of the Left, which has created a dual-track legal system for elites and common Americans, which is No. 4.

There was the whole Trump-Russia mess, which we know was a political hit job everybody involved with got away with. Hillary got away with the business with her emails and the Clinton Foundation. Debbie Wasserman Schultz and the Pakistani spies having free rein on Congress’ email system. Jeffrey Epstein, who didn’t kill himself. There’s a lot of corruption out there and it has a lot of people furious.

If our side can be the side of law and order, like real law and order and not just defending the cops when there’s an Alton Sterling or George Floyd case, there’s a lot of headway to be made.

Finally, there’s breaking the power of American elites to corrupt and degrade our cultural institutions with things like wokeism, cancel culture, and Critical Race Theory.

This picks up the other two issues my consultant friend noted. He said Critical Race Theory is the biggest mover of votes he’s ever seen, and he also said the transgender issue is second. I know there are lots of folks who think those are kind of virtue-signally, but the culture is a big deal.

As Andrew Breitbart said, politics is downstream of culture. And culture is getting especially weird.

For a long time we didn’t want to fight in the culture. But right now the culture is really easy to win. People have had it.

Nobody watches movies anymore. NBC didn’t order a single comedy for this fall’s schedule because they’re afraid of making fun of somebody and getting canceled. You don’t have to be a Moral Majority disciple to be a culture warrior, you just have to be normal. And believing Martin Luther King was on to something when he talked about the content of our character, which five minutes ago I thought we all agreed on, is now a far-right radical proposition.

The thing is, Donald Trump isn’t on the ballot. Who knows? He might not be again. A lot of this stuff was originally his, but not all of it. But presenting the public with this, compared to what Biden brings?

It’s the stuff a comeback is made of.